Support on Patreon Follow @wellshwood
10 Comments
Give Wonder A Chance?

“It was better than expected,” he says. “I was actually surprised at how likable it was. And it doesn’t just focus on the disfigured kid. At some point the film starts to shift toward other characters linked to the kid and tell their own stories, with each chapter being named after them. There must have been around three chapters dedicated to three separate characters.

“It seems as if critics are already shooting darts at it, mostly because of that misguided trailer, so who knows how the reviews will turn out? But all the child actors are really good in this, all of them delivering is a very believable way. I bought the story of the kid as well. It never felt maudlin or sugar-coated. Roberts was also excellent, probably her best work since…what, Duplicity?

“We shouldn’t be so surprised that Wonder has turned out to be a good movie. Chbosky, who brought a sensitive and delicate touch to The Perks of Being a Wallflower, is no slouch. The ending is a bit flat, but most of the movie works.” 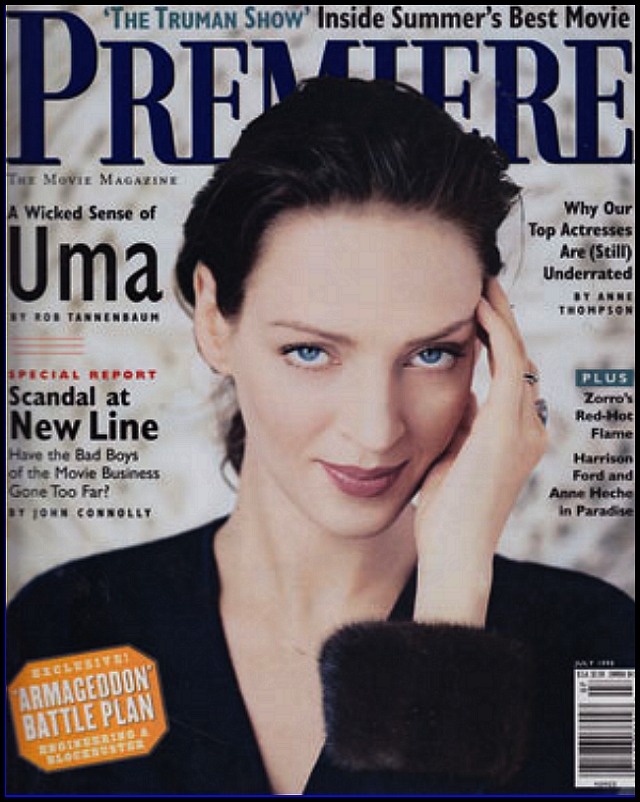 Hey, I know — let’s have George Clooney get blown up and burnt to death on the way back from Westchester to Manhattan in Michael Clayton. Forget the mystical moment with the horses. He’s a flawed guy anyway. A fixer, a janitor and a shortfaller so let’s kill him. Better that way. We can just insert a bit in which Clayton, before leaving for Westchester, mails that incriminating memo to the N.Y. Times. That way the audience will know that Tilda Swinton, Ken Howard and U-North will pay in the end.

U-North, for the film Michael Clayton from Victor Melton on Vimeo.

Hollywood Elsewhere agrees with the AMPAS Board of Governors’ decision to give a special Oscar to Alejandro G. Inarritu’s Carne y Arena, the virtual reality installation that I submitted to on 5.18 in Cannes and again on 7.1 at the Los Angeles County Museum of Art. (I was told at the time the installation would be discontinued last month, but it’s still going.) The Carne y Arena experience is a six-and-a-half-minute virtual reality trip that simulates with all-encompassing realism what Mexican immigrants often go through while attempting to cross the United States border in the Southwestern desert region. It’s a collaboration between Inarritu, dp Emmanuel Lubezki, producer Mary Parent, Legendary Entertainment, Fondazione Prada, ILMxLAB and Emerson Collective. The Oscar will be presented to Inarritu, et. al. during the 9th Annual Governors Awards on Saturday, 11.11, at the Hollywood & Highland Center. 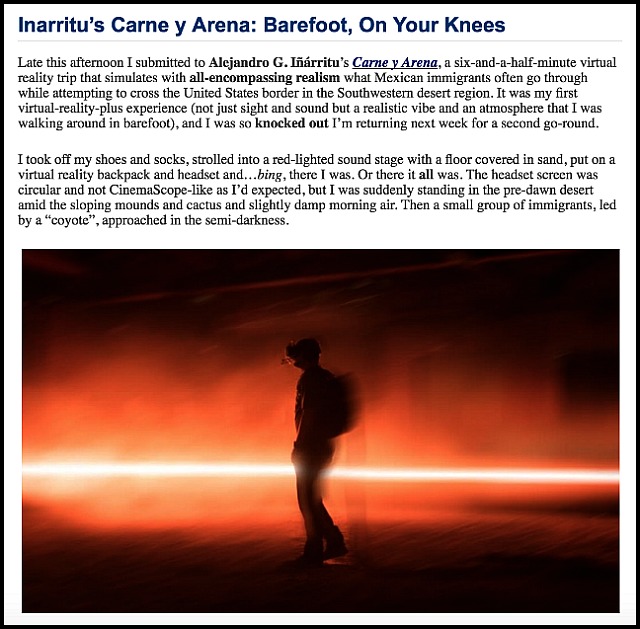 I finally finished watching Netflix’s Mindhunter last night. All ten episodes. Wow. Precise, patient, unnerving, character-rich, exacting dialogue, blissfully intelligent. By far the most engrossing Netflix thing I’ve sat through this year, and that includes Okja, First They Killed My Father, Mudbound and The Meyerowitz Stories. I’m really glad the second season has been approved as I couldn’t get enough of season #1. Really and truly riveted. A perfect thing to watch at the end of a long, vaguely depressing, anxiety-ridden day consumed by writing and researching and…you don’t want to know the rest.

An HE salute to producers David Fincher (who directed episodes #1, #2, #9 and #10), Charlize Theron, Josh Donen and Cean Chaffin.

For whatever reason I didn’t do my research until a week or so ago, and hadn’t realized that Holden Ford is based on former special agent John Douglas, who co-authored the same-titled book about his 25 year career with the FBI’s Investigative Support Unit.

I loved the Holden and Debbie breakup scene in episode #10. [After the jump.] Or rather the “Holden breaks up with himself” scene. Debbie is radiating that silent hostility thing that women love to radiate when so inclined, signalling everything and saying nothing. Holden calmly adds up the signs and indicators and comes to a conclusion that “you’re breaking up with me?” Yup, that’s what she’s doing but she’s making you do the work.