Following today’s Detroit schmoozer and then a 6pm outdoor gathering for Guillermo del Toro‘s The Shape of Water on the 20th Century Fox lot, Hollywood Elsewhere and TatyanaAntropova had dinner at Matsuhisa with Call Me By Your Name director Luca Guadagnino plus editor Walter Fasano, director Ferdinando Filomarino and Amazon exec Scott Foundas. The food was delectable; the conversational vibe couldn’t have been more soothing, stimulating, spontaneous, warm, etc. Thank fortune for happy times. 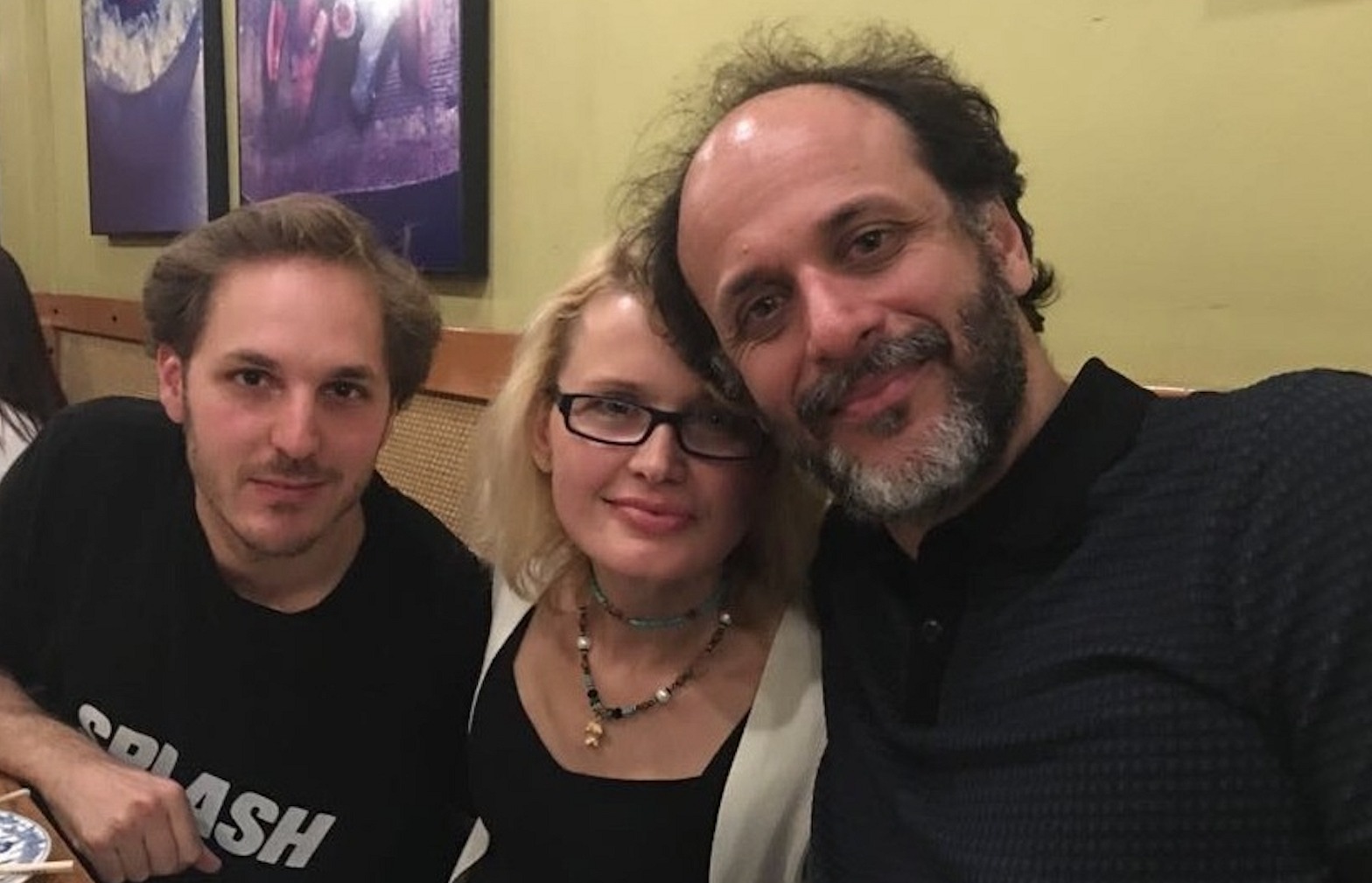 A portion of the Detroit team greeted journalists during a two-hour schmoozer earlier today at Nerano (9960 Santa Monica Blvd., just east of Century City). By “portion” I mean that the only above-the-title guy to attend was producer-writer Mark Boal, and the only familiar faces among the cast were Will Poulter, who played the most belligerent of the racist cops, and Algee Smith, the good-looking guy who played musician Larry Reed. Questlove, the composer of the closing-credits tune “It Ain’t Fair“, was also there. 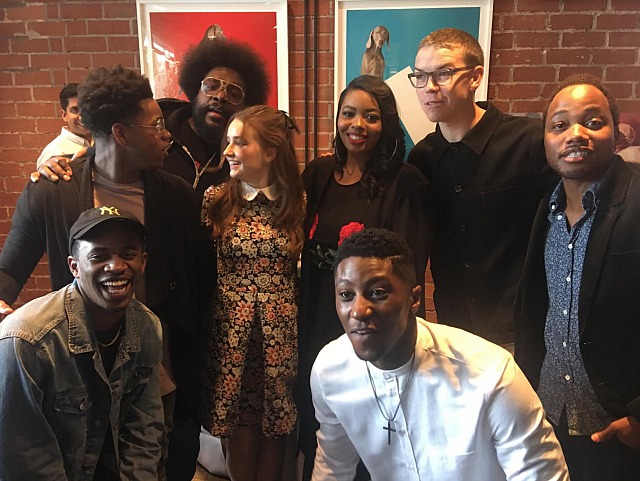 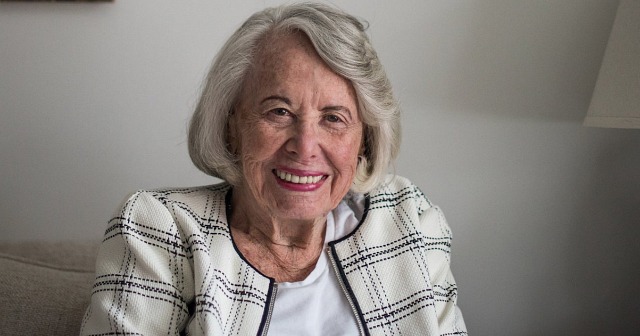 John Leland wrote an excellent profile of Smith for the N.Y. Times on 7.28.17, titled “The Rise and Fall of Liz Smith, Celebrity Accomplice.” 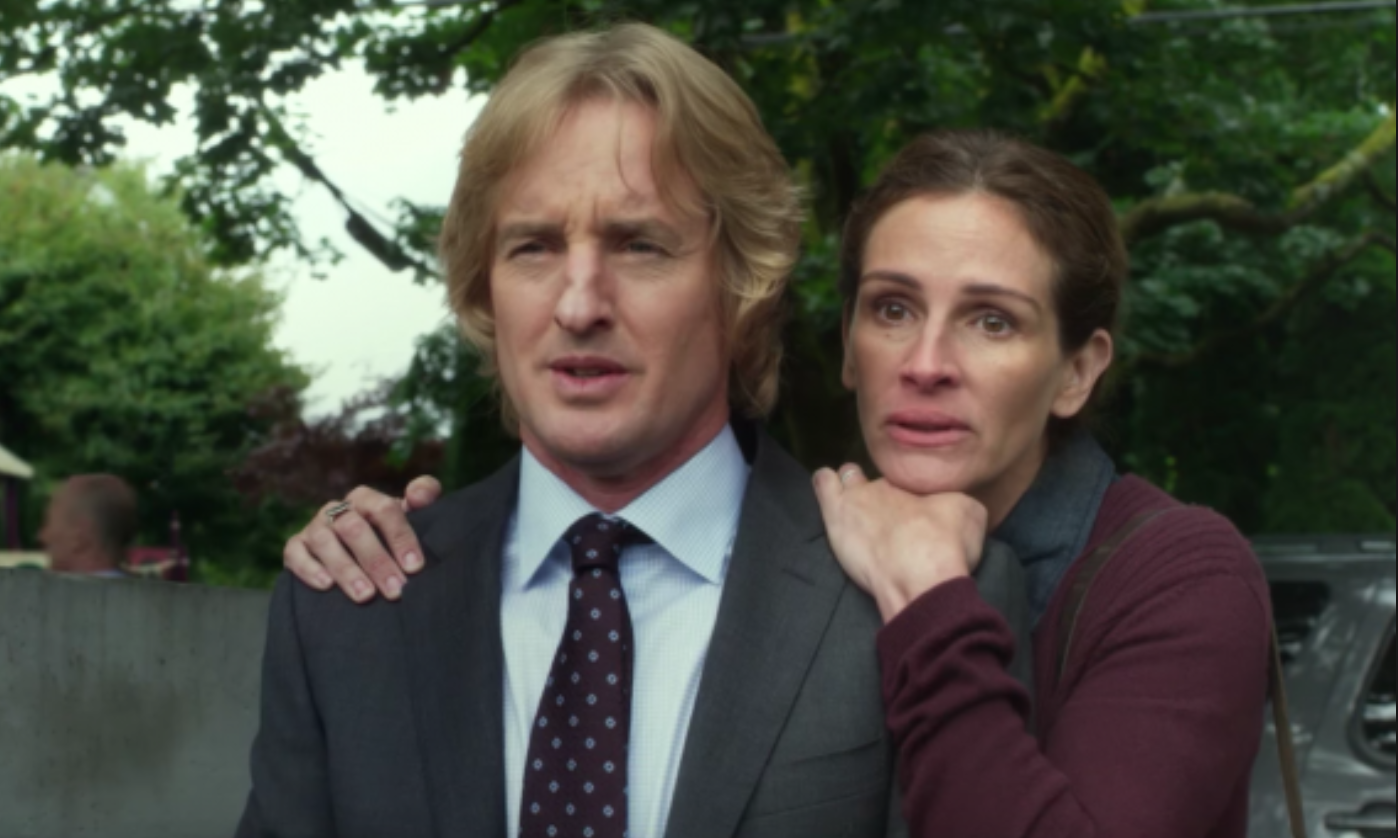 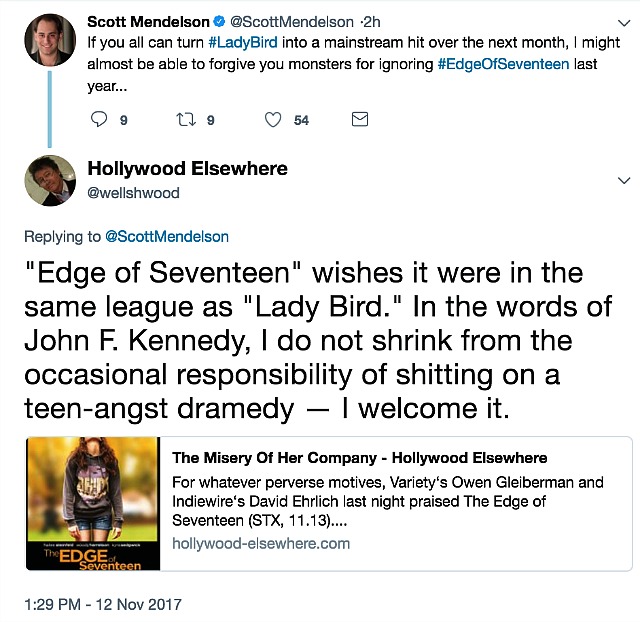 I don’t “do” birthdays as a rule, but thanks for all the good wishes. Ever since I developed an acute sense of encroaching mortality (or sometime in my mid 30s), birthdays have been an official signifier that I am one year closer to the final curtain and the eternal black nothingness of death. I would much rather focus on the thousands upon thousands of profound delights, lessons and comforts afforded by being vigorously alive. Tatyana suggested yesterday that I should instead regard birthdays as a celebration of the sum total of my life and the fact that I’ve made it this far in good health and without any maladies, aches, neck wattles or bald spots to speak of. So okay, fine — I’m happy about that part of it. 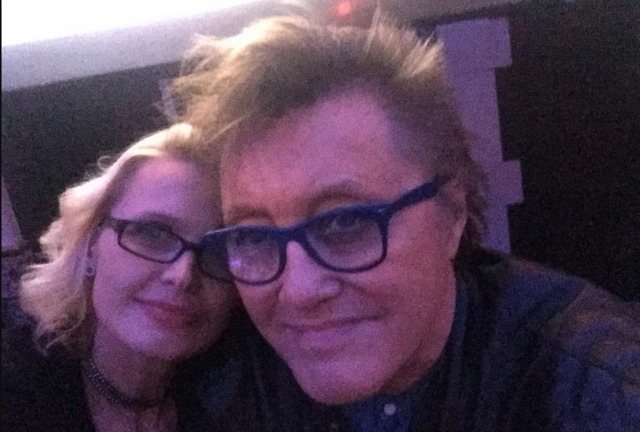 Snapped during last night’s AFI Fest Call Me By Your Name after-party at the Hollywood Roosevelt.

My critical riffs about Craig Gillespie‘s I, Tonya (A24, 12.8) since catching it in Toronto have been a bit heated, so here’s an attempt to tone them down. I’ve said repeatedly that the film’s satirical brush is coarse and vulgar. Those two words are a fair description of the Harding family and their ne’er-do-well allies, but also the film’s supercilious mocking of these lost souls. As HE commenter Bobby Peru put it, “Aren’t we hilarious making fun of these local yokel shitheads?” 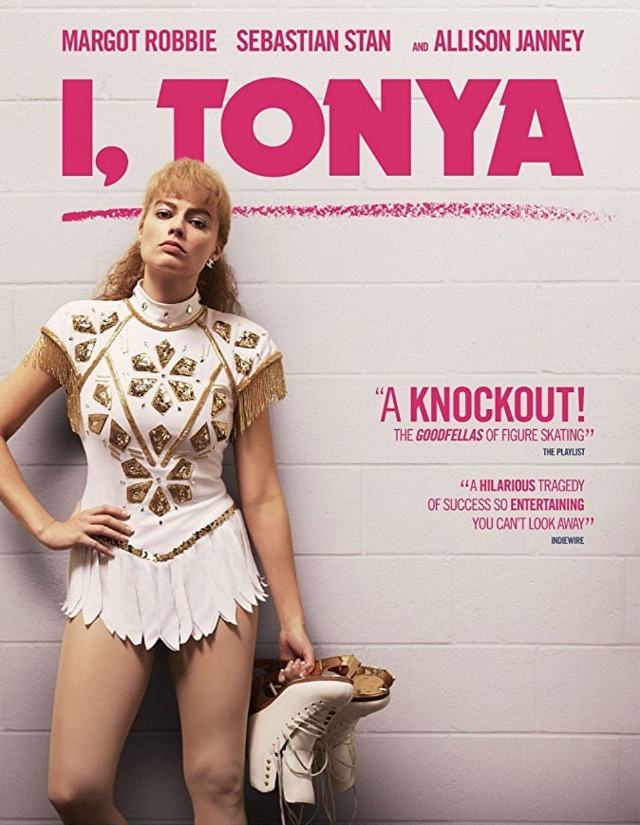 You could argue that I, Tonya’s satirical strategy is somewhat akin to an anti-pornography satire that buries the viewer in a torrent of X-rated footage. A closer analogy is The Wolf of Wall Street (’13), in which Martin Scorsese and Leonardo DiCaprio broadly satirized ravenous Wall Street bottom feeders. The difference is that Wolf’s brand of outrageous black humor frequently connects, at times hilariously so. (The quaalude overdose sequence.). In my humble view I, Tonya (a) isn’t nearly as funny or even amusing, and (b) could conceivably give you cancer.

Am I voicing a minority opinion? Certainly. Satirically speaking, does I, Tonya have a kind of rough-hewn integrity? Yes — it sticks to the battle plan of looking down at these seething, cigarette-smoking, not-smart-enough losers. And it doesn’t attempt any manipulative emotional outreach strategies except by way of Margot Robbie’s anguished lead performance. Agreed, Robbie and Allison Janey will probably snag Best Actress and Best Supporting Actress Oscar noms, respectively, but what else is new?

A Universal film called Girls Trip opened last June and pulled in $137 million. I wouldn’t know but terrific. Regina Hall, Queen Latifa, Jada Pinkett Smith and Tiffany Haddish costarred. Haddish hosted Saturday Night Live last night, and in her opening monologue the two stand-outs were about sexual harassment (“If you got your thing-thing out, and she got all her clothes on, you’re wrong…wait ’til she takes her own clothes off, then pull your thing-thing out!”) and Donald Trump‘s hair — dusty material, easy target. Haddish said she gets all her news “from the beauty shop” — brilliant — and noted that the girls are saying “dang, who is doing Donald Trump’s wigs? His lace fronts are off the chain! What kind of glue is he using?”

Not to defend Trump in any context, but that’s a sexist crack. Imagine a male comedian telling a joke about a 60-plus actress wearing a great-looking wig or hair extensions. The room would become Edgar Allen Poe‘s The Tomb of Ligeia, and then he’d be apologizing the next day to the club owner. Longish pompadours look weird on older guys, agreed, but there’s something dictatorial about the fashionistas ridiculing same.

42 Comments
Call Me By Your Name‘s Big Night

Hollywood Elsewhere + Tatyana Antropova attended last night’s big AFI Film Fest screening at the TCL Chinese, and then the big after-party at the Hollywood Roosevelt. It was my third viewing, and it didn’t diminish in the slightest. This film is full of little rivulets and off-angles and cross-corner pocket drops. I easily could see it another couple of times. It’s a perfectly realized thing, nothing off or miscalculated. The term is “masterpiece.”

Tone-deaf predictions and sluggish attitudes from certain quarters aside, CMBYN has to be Best Picture-nominated. At least that. The Movie Godz would be appalled if the Academy elbows it aside.

And the following paragraph from an 11.11 piece by TheWrap‘s Mikey Glazer is, no offense, almost surreal in its disconnect from reality: “While Brokeback via Lombardia may not normally raise eyebrows, in the current climate of hourly explosive revelations of sexual harassment and assault across the entertainment industry, any tenor of impropriety in a physical relationship made this all the more sensitive.”

“Impropriety”? There isn’t a whiff of the stuff in Call Me By Your Name, and that’s all that should matter to anyone. There’s no emotional indifference or bruising in this film. No cruelty, exploitation, selfishness. Okay, a young girl gets her feelings hurt but quickly recovers. This is simply an elegant love story that unfolds at its own leisurely pace, and in a way that touches everyone.

Elio, the precocious 17 year-old played by Timothee Chalamet (who actually turns 22 next month), falls in love with Oliver (Armie Hammer), a studious, somewhat glib guy in the mid 20s, and they seem more or less on an equal footing. It hurts when love slips away, of course, but people of all ages have felt this over the centuries, and Elio’s parents are with Elio on his emotional journey every step of the way.

Posted on 6.4.17: “Call Me By Your Name is, yes, a first-love film, an early ’80s gay romance and a sensual, laid-back Italian summer dreamscape. But it connects in a more fundamental way with family values, which is to say father-son values, extended-family values, community values…we’re all together in this.

I’ve been gradually warming to James Franco‘s The Disaster Artist (A24, 12.1) since I first saw and reviewed it about three weeks ago. Do I have to describe it again? A drly comedic true-life saga about the making of a notoriously awful indie-level film called The Room, etc.? Naahh.

On 10.25 I called it “a curio, a diversion…fine for what it is…generates a kind of chuckly vibe on a scene-by-scene basis, but that’s all.” Shoulder-shrugging approval, thumbs up but calm down, etc. 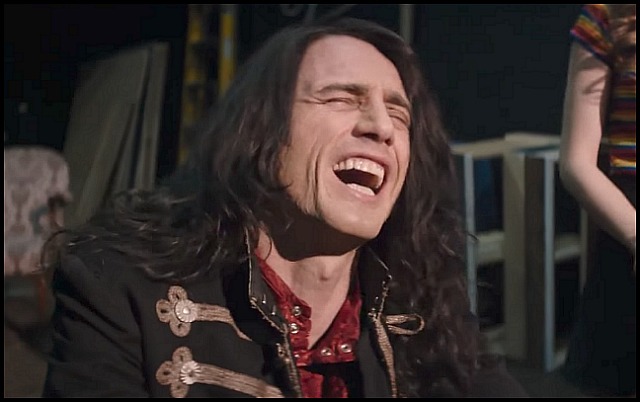 Nine days later I said I couldn’t get the sound of James Franco‘s spazzy, primal-scream “aaaggghh!” out of my head. The howling is part of Franco’s dead-on imitation of Tommy Wiseau‘s performance in The Room.

I saw The Disaster Artist again last weekend, and for some reason it seemed funnier this time. Probably because I knew the story and when the highlights would arrive, so I was able to focus on the tone and delivery. Maybe it was also because Tatyana was laughing a lot; ditto several others in the screening room. It just felt like more infectious, more fun. So if it’s okay I’d like to upgrade my reaction. If I gave The Disaster Artist a B-minus in my 10.25 review, I’d like to change that grade to a B-plus or maybe even an A-minus.