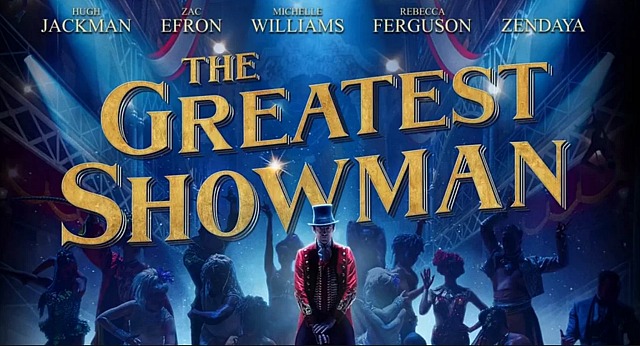 20,971 petitioners apparently want George Clooney and Steven Soderbergh to “do a Ridley Scott” with Matt Damon‘s cameo in Gary Ross‘s Ocean’s 8 (Warner Bros., 6.8.18), an all-female soft reboot of the Ocean’s trilogy. That or cut Damon’s cameo altogether. I knew that Damon has been under fire for, in the opinion of some, not condemning sexual misbehavior with sufficient severity, but I hadn’t realized until today that he’s almost regarded as a Kevin Spacey-type ogre. Almost.

Damon hasn’t been accused of sexual harassment or assault by anyone, but he is regarded as some kind of apologist or look-the-other-way type when it comes to the behavior of male abusers like Harvey Weinstein. Damon sounded relatively sane and reasonable to me when he spoke a week ago to Rolling Stone‘s Peter Travers about the current #MeToo climate, but the Robespierre contingent disagrees.

“Matt Damon should not be in this movie,” a Petitionsite essay declares. “[His] inclusion would trivialize the serious nature of the charges against sexual abusers like Weinstein and show massive disrespect for the brave women speaking out. It would also send a terrible message about the inevitability of — and lack of accountability for — sexual harassment in the workplace that four in ten American women experience. I’m calling on Oceans 8 producers George Clooney and Steven Soderbergh to toss Damon’s Oceans 8 cameo where it belongs: on the cutting room floor.”

A couple of hours ago Glamour‘s Abby Gardner, speaking on behalf of the “woke” Twitter comintern, lambasted the editors of a just-published L.A. Times‘ Envelope issue (dated 12.21) for excluding actresses of color from the cover and the conversation. 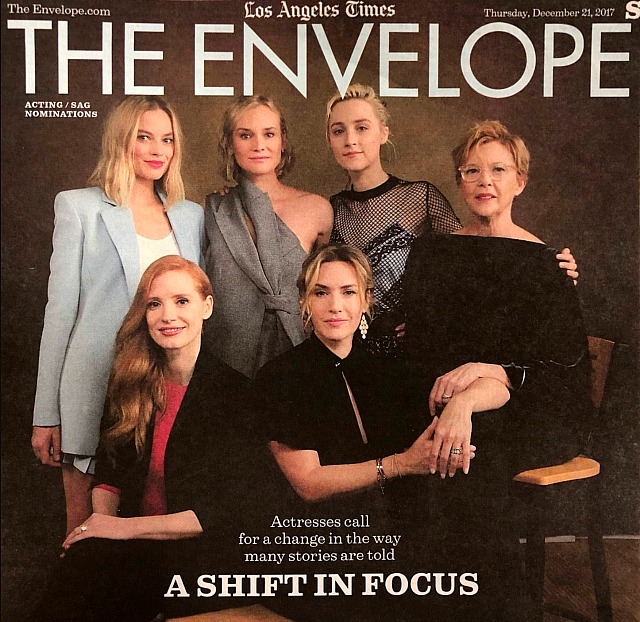 Gardner’s complaint is, of course, complete bullshit for two reasons: (a) the idea was apparently to highlight leading Best Actress contenders, and (b) this year there are, lamentably, no non-white actresses in serious contention for that trophy. (Best Supporting Actress is a different story — Mudbound‘s Mary J. Blige, Girls Trip‘s Tiffany Haddish, Downsizing‘s Hong Chau, Shape of Water‘s Octavia Spencer.)

The only woman of color who might have made it into the 2017 Best Actress circle is Natalie Paul, who was excellent in Matt Ruskin‘s Crown Heights but who never really campaigned or found traction of any kind.

If there’s a “problem” with the Envelope cover it’s because three leading contenders — The Post‘s Meryl Streep, The Shape of Water‘s Sally Hawkins and Three Billboards Outside Ebbing, Missouri‘s Frances McDormand are missing. And honestly? The only actresses on the current cover who really count and deserve the highest consideration for the Best Actress Oscar are Ronan and Kruger.

Okay, you could maybe add Robbie to the hottie list, but Bening, Chastain and Winslet aren’t happening.

Nikki Haley‘s statement yesterday about a then-forthcoming U.N. vote about the Trump administration’s decision to support relocating the Israeli capital from Tel Aviv to Jerusalem, was, in the words of Morning Joe‘s Joe Scarborough, “somewhere between a schoolyard taunt and a mafia boss’s threat.” In the words of former CIA director John Brennan, “Trump administration’s threat to retaliate against nations [that] oppose U.S.position on Jerusalem is beyond outrageous…[it] shows that @realDonaldTrump expects blind loyalty and subservience from everyone — qualities usually found in narcissistic, vengeful autocrats.”

In one corner, Gary Oldman‘s hammy, blustery, broadly performed Winston Churchill, fortified with prosthetics and aimed at the cheap seats. In another corner, this.

Mike Nichols and Buck Henry‘s The Graduate, perhaps the most culturally on-target, stylistically audacious and emotionally affecting relationship comedy in Hollywood history, opened exactly a half-century ago — on 12.22.67. But guess what? It’s time for a significant portion of that respect and glorification to go away, and for two reasons. I’m presuming that HE readers can guess the first without reading any further.

Just as former New York Post critic Lou Lumenick proclaimed a couple of years ago that Gone With The Wind has become a disreputable and even odious film because it reflects unfortunate racial attitudes of the late 1930s, Vox’s Alissa Wilkinson announced yesterday that it’s time to take The Graduate down a peg or two, partly because of recent allegations of sexual harassment and assault against Dustin Hoffman, and partly because Benjamin Braddock is a dullard — a far less interesting character than Anne Bancroft‘s Mrs. Robinson or even Katherine Ross‘s Elaine Robinson.

HE response #1: Deplorable as Hoffman’s behavior is alleged to have been during certain encounters in the ’80s, when The Graduate was shot he was a 29 year-old actor doing his damnedest to make the Braddock character sympathetic and engaging, and for the last half-century just about the entire civilized world has agreed that he achieved that goal. You can’t come along 50 years later and say “But Hoffman acted like a sexist asshole in the ’80s!” and so everything he did creatively before, during and after the Reagan era has to be darkly re-assessed.

HE response #2: On top of which Nichols and Henry, The Graduate‘s director and screenwriter, deliberately portrayed Braddock as confused, unfocused, de-politicized and largely inarticulate for the first 65 minutes. That was all a set-up for the big pivot point when Benjamin realizes he loves Elaine and is determined to end his affair with her mother. The first hour and change is about a bumbling guy in a passive-reactive state of mind, and the last 35 or 40 minutes is about this guy struggling to achieve a goal and attain a kind of emotional fulfillment.

HE response #3: Wilkinson doesn’t take credit for her “Mrs. Robinson is a more layered and intriguing character than Braddock” opinion, which I happen to agree with as far as the first 65 minutes is concerned. She acknowledges, in fact, that Roger Ebert offered this opinion at the time of the film’s 30th anniversary. She could have added that Sam Kashner said the same thing in a 2008 Vanity Fair piece about the making of The Graduate.