20,971 petitioners apparently want George Clooney and Steven Soderbergh to “do a Ridley Scott” with Matt Damon‘s cameo in Gary Ross‘s Ocean’s 8 (Warner Bros., 6.8.18), an all-female soft reboot of the Ocean’s trilogy. That or cut Damon’s cameo altogether. I knew that Damon has been under fire for, in the opinion of some, not condemning sexual misbehavior with sufficient severity, but I hadn’t realized until today that he’s almost regarded as a Kevin Spacey-type ogre. Almost.

Damon hasn’t been accused of sexual harassment or assault by anyone, but he is regarded as some kind of apologist or look-the-other-way type when it comes to the behavior of male abusers like Harvey Weinstein. Damon sounded relatively sane and reasonable to me when he spoke a week ago to Rolling Stone‘s Peter Travers about the current #MeToo climate, but the Robespierre contingent disagrees.

“Matt Damon should not be in this movie,” a Petitionsite essay declares. “[His] inclusion would trivialize the serious nature of the charges against sexual abusers like Weinstein and show massive disrespect for the brave women speaking out. It would also send a terrible message about the inevitability of — and lack of accountability for — sexual harassment in the workplace that four in ten American women experience. I’m calling on Oceans 8 producers George Clooney and Steven Soderbergh to toss Damon’s Oceans 8 cameo where it belongs: on the cutting room floor.” 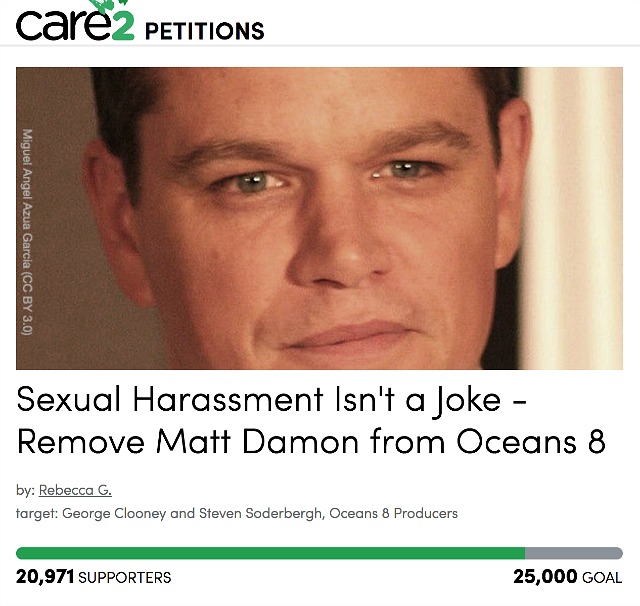