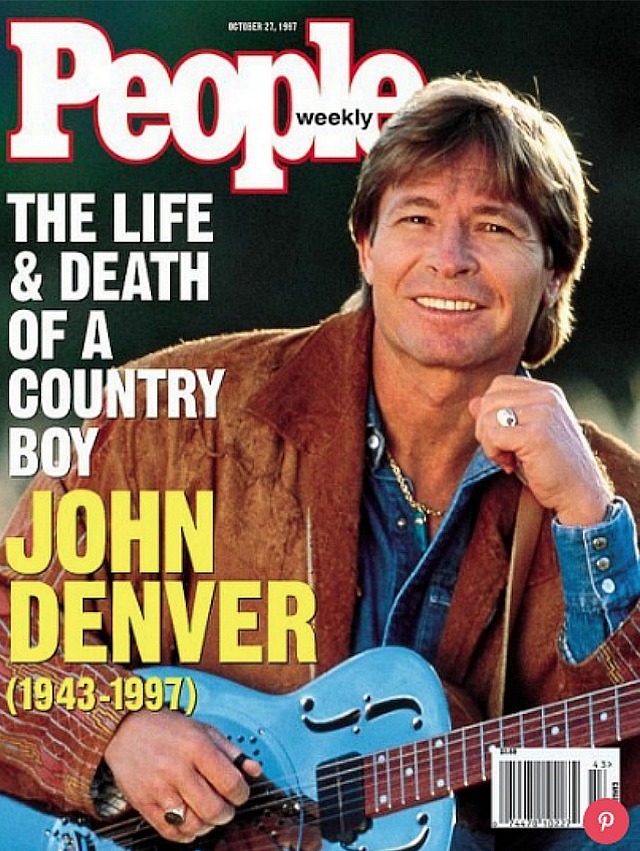 “An amusing, at times hilarious monster-hunt thriller, and at the same time highly attuned to and in fact feeding off social currents and attitudes of the late ‘80s…disdainful of country music and ghetto blasters, mindful of cocaine and the assholes who were still snorting it back then, and seriously in love with muscle cars.” — tweeted yesterday about a 12.21 Digital Bits review of the Warner Archive Bluray for The Hidden.

The other night I streamed a handsome high-def version of George Stevens‘ Gunga Din on Amazon. I still love it for the nicely choreographed action in the first half-hour and the serious tension of the final 40 minutes (prisoners, snake pit, hostage, Sam Jaffe‘s “stupid courage,” triumphant defeat of Thug army, Kipling’s poem, Jaffe resurrected in a corporal’s uniform). That leaves 47 minutes of material that isn’t exactly tiresome or “bad” but which taxes your patience in certain ways.

I’m probably wrong in thinking that Gunga Din was the first big-budget Hollywood adventure to mix acrobatic adventure, winking humor and servings of serious drama in one package, but it was certainly one of the first. Stevens knew about laughs and slapstick choreography from having worked for comedy producer Hal Roach in the early ’30s, and he certainly used those skills here. 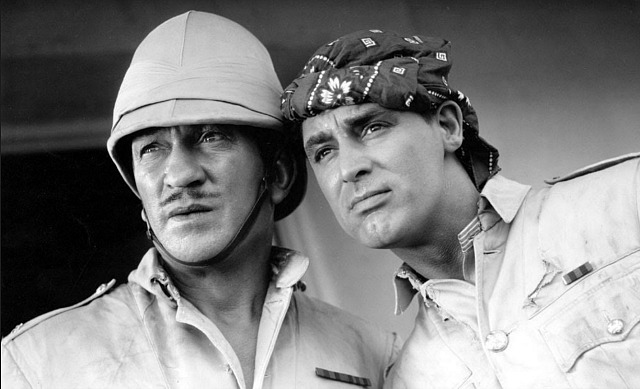 Is there a single Millenial out there who’s even heard of this film, much less seen it beginning to end? I wonder. It doesn’t even begin to speak their language. But the afore-mentioned hour-plus (especially the opening 30) delivers so much dash and zest. You can’t help but marvel at how the individual cuts and pieces fit together just so.

In a piece called “It’s Criminal,” New Republic critic Otis Ferguson severely criticized Gunga Din for celebrating the authority of British colonialism without hesitation and at the same time depicting the “thuggee” terrorists (anti-colonialists who were more or less a late 19th Century version of India’s Viet Cong) as mere cutthroats. “So much for the content,” Ferguson concluded. He added as an afterthought that the “form” of Gunga Din is quite entertaining, rousing, thrilling, etc.

N.Y. Times critic B.R. Crisler addressed only the form in a N.Y. Times review that was published on 1.27.39:

“At its best, Gunga Din is an orchestration, taut with suspense and enriched in the fighting scenes with beautifully timed, almost. epigrammatic bits of ‘business‘ and a swinging gusto which makes of every roundhouse blow a thing of beauty.

I’m almost teary-eyed with nostalgia for time I spent in New York City during the 2013 Christmas holiday. Six or seven days, whatever it was. I took a friend to see The Wolf of Wall Street at the gone-but-not-forgotten Ziegfeld on a Saturday night, and it was just heaven. The whole night was actually. The energy, the air, the aromas…all of it. Christmas isn’t really Christmas unless you’re roaming around midtown and lower Manhattan at night, and then maybe taking a train to visit friends in the suburbs for a day or two. Or if you’re roaming around London, which I was lucky enough to do in December of ’80. Nippy weather, overcoat, gloves, etc. The chillier the air, the better the holiday. 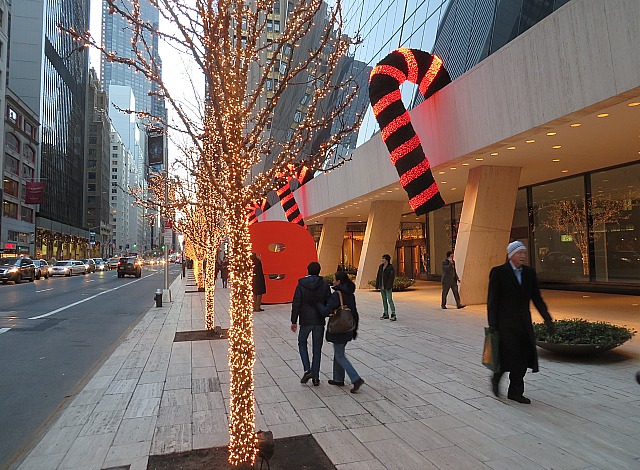 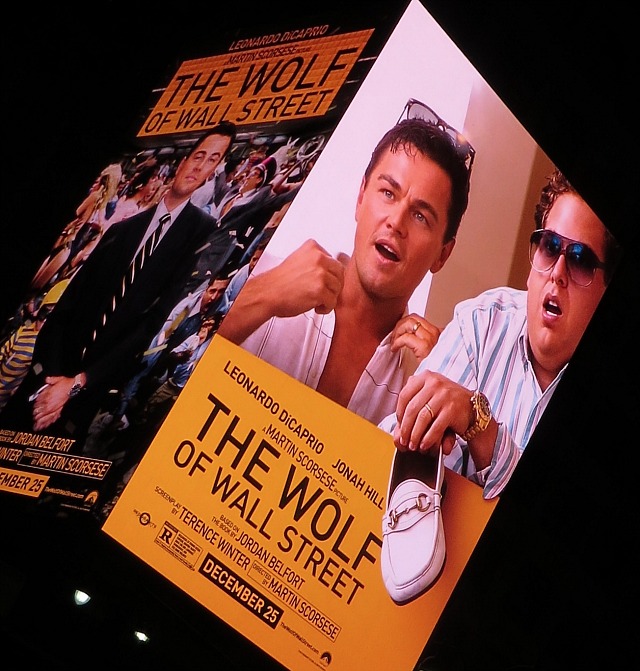 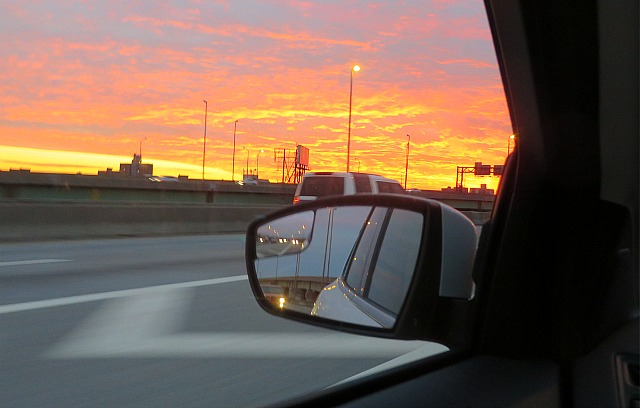 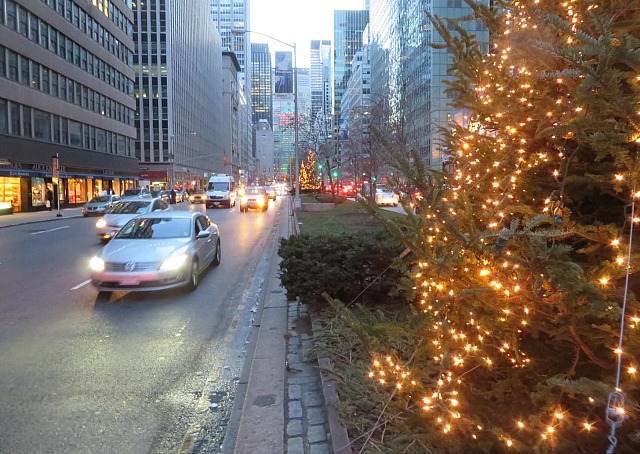 It’s been 13 and 1/2 months since Donald Trump was elected President, and my anger about what’s happened to this country since 1.20.17 has been tempestuous. But the root of my rage is still, the night before Christmas, aimed at older GenX and boomer-aged establishment Democrats who advanced and financed the candidacy of Hillary Clinton, and eventually locked it down in the spring of ’16.

I voted for Clinton for all the usual sane, forward-looking reasons, but Hillary and the genderists and especially the entrenched Democratic mafia types who muscled her through the primary and delegate-pledging process…they are the main reason we’re currently stuck in the psychotic hellscape of the here-and-now. For Hillary is and was so polarizing, so hated by the bubbas, so unable or uninterested in trying to reach out to poor whites. The bumblefucks voted for Trump, yes, but a significant majority of them, I’m convinced, mainly voted against Clinton, and there can be no forgiving the liberal establishment donor class for making this scenario inevitable.

Any viable, dynamic woman candidate who wasn’t Hillary…if only someone had pushed through.

An anecdote from a six-month-old podcast between Washington Post columnist Jonathan Capeheart and Justin Gest, author of “The New Minority: White Working Class Politics in an Age of Immigration and Inequality,” which explains the dug-in, deep-down mindset of rural bumblefucks who supported Trump and who will continue to support him despite the psychotic poison he and his cabinet have been spewing for the last 11 months.

Gest: “[For poor, working-class whites] racism has become an instrument of silence…it is a way of invalidating people…white working class people are not the silent majority, they are the silenced majority…many of them feel silenced by the political correctness brigade…Democrats used to be pro-union and pro-working class [but] since the late ’80s and early ’90s they’ve become [increasingly] allied with the financial class…there are 660 counties in the U.S. that are 90% or 80% white, and earning below the median income in the U.S….of those poor counties, how many did Hillary Clinton win? The answer is two.”