N.Y. Times reporter Brooks Barnes has investigated the bizarre pay discrepancy between Mark Wahlberg and Michelle Williams for the All The Money In The World re-shoots, with Wahlberg being paid $1.5 million and Williams doing it more or less for free.

Barnes writes that while Williams and Wahlberg had agreed to appear in All the Money in the World for less than their standard fee, “[they] took different approaches to the reshoots.

“Because of the circumstances, Williams quickly agreed to return. The people briefed on the matter said that she did so believing that other participants had made the same decision. She ultimately worked over Thanksgiving, racing to London on an overnight flight after arranging for her 12-year-old daughter, Matilda, to spend the holiday without her.

“’They could have my salary, they could have my holiday, whatever they wanted,’ she said of the production team at the time. ‘Because I appreciated so much that they were making this massive effort.’

For the 47th (or is it the 48th?) time the three greatest films of 2017 are Luca Guadgnino‘s Call Me By Your Name, Chris Nolan‘s Dunkirk and Greta Gerwig‘s Lady Bird. Why then are so many predicting that Nolan and possibly Gerwig will be nominated tomorrow by the Directors Guild of America, but aren’t even allowing that Guadagnino is a possibility?

I get the Guillermo del Toro and Martin McDonaugh noms as their films, The Shape of Water and Three Billboards outside Ebbing, Missouri, have become across-the-board soft defaults, but…wait, Get Out‘s Jordan Peele is among the likelies? Did somebody put something in the water? Is the seed-pod situation I described yesterday worse than I realized? 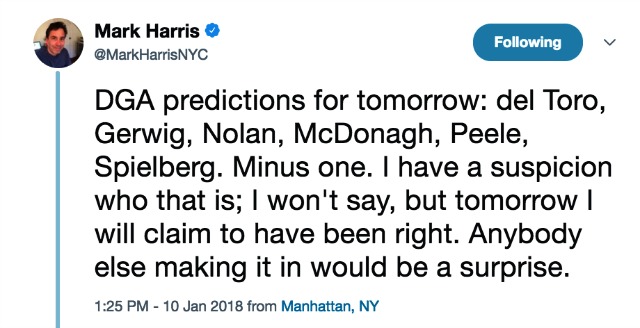 The DGA has added a “first-time director” category, and this is where Peele belongs, at best. Peele barely pulled his film together from a script that he himself wasn’t entirely sure belonged in the horror or comedy realm, an uncertainty that lingered even during post-production. Get Out obviously came together and made a lot of money, okay, but Peele deserves a DGA nom more than Luca Guadagnino?

Awards Daily‘s Sasha Stone is predicting the following five DGA noms as of this time tomorrow: McDonagh, del Toro, Nolan, Peele and Gerwig. She’s saying the fifth slot “could” also go to Guadagnino or The Post‘s Steven Spielberg. She suspects that Guadagnino, along with The Florida Project‘s Sean Baker and Phantom Thread‘s Paul Thomas Anderson, may be a better bet for the Academy rather than DGA.

It was reported yesterday that residents of Zermatt, the Swiss ski town that lies in the shadow of the Matterhorn, had to be airlifted out due to extra-heavy snow, non-running trains and a fear of avalanches. Gee, that’s too bad. Five and 2/3 years ago Hollywood Elsewhere had a very irritating experience with this precious little hamlet, which is why I feel no sympathy. Here’s the tale once more:

Ever since seeing my first image of the Matterhorn when I was eight or nine I’ve wanted to stand in its shadow and just go “whoa.” So yesterday the guys and I drove the wrong way (i.e., four hours over winding mountain roads) from Lauterbrunnen to Zermatt, the affluent ski town that lies at the base of it.

The trip turned out to be mostly a disaster. Because of an innocent mistake I almost got slammed with a 350 Swiss franc traffic ticket — thank God I was able to talk my way out of it.

The signs on the long and winding approach to Zermatt fail to explicitly point out a basic fact — you can’t drive into town unless you’re a resident or a cab driver or a city worker. You have to park in Tasch, an ugly little settlement about six kilometers north of Zermatt, and take a train or a taxi in. Fine, no problem, but there are no signs that clearly say this, and certainly none in English.

When I see a sign that says “park here,” I say to myself, “Okay, that’s an option, fine. It’s not something I necessarily intend to do as I am the sole master of my fate, but it’s nice to know it’s there.”

HE suggestion to Zermatt brainiacs: The words “Non-resident passenger vehicles are not allowed in Zermatt” would definitely be understood if you said as much on a road sign. Or how about an image of a car with a big red X or a circle slash across it? Idiots.

From 1.10.18 N.Y. Times piece by Julie Hirschfeld Davis and Nicholas Fandos [see 8:35 mark]: “President Trump on Wednesday declined to commit to being interviewed by the special counsel investigating whether his campaign colluded with Russia to sway the 2016 election, backing off a promise he made last year to talk to Robert S. Mueller under oath.

‘“I’ll speak to attorneys,’ Trump told reporters in the East Room during a news conference with Prime Minister Erna Solberg of Norway, when asked whether he would speak with Mr. Mueller without preconditions. ‘We’ll see what happens.’

The dodge was a marked change from last June, when Mr. Trump defended his firing of the F.B.I. director, James B. Comey, denying that it was related to his handling of the Russia investigation, and said he would ‘100 percent’ be willing to give a sworn statement to Mr. Mueller.

“The president called Mr. Mueller’s probe and the ones being pursued by the Republican-led Congress a partisan ‘witch hunt’ and a ‘Democrat hoax.’

“’For 11 months, they’ve had this phony cloud over this administration, over our government, and it has hurt our government,’ Mr. Trump said. “When they have no collusion, and nobody’s found any collusion at any level, it seems unlikely that you’d even have an interview.” 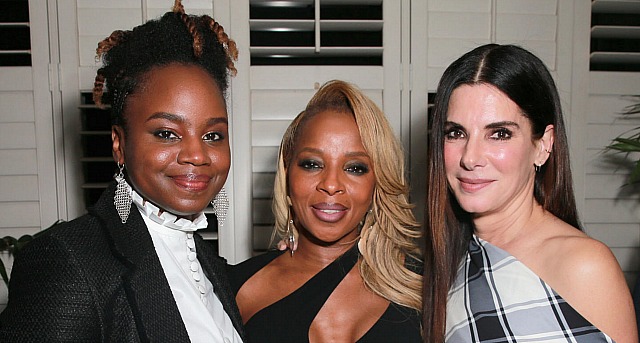 The idea was to remind Academy members who haven’t yet filled out their nomination ballots (Friday, 1.12 is the final day) that Mudbound is (a) one of the year’s most awarded and nominated films, (b) that Blige is a serious Best Supporting Actress contender, and (c) that the striking cinematography by ASC-nominated Rachel Morrison deserves a nom of its own.

Ask ten film historians about David Lean‘s Ryan’s Daughter, and they’ll all say it nearly killed Lean’s career. Slow and stately, over-indulged, visually pompous and old-schoolish to a fault. And that awful, Oscar-awarded village-idiot performance by John Mills. Magnificent Freddie Young cinematography, okay, but otherwise a sudden fall from grace. Not even close to the realm of Lawrence of Arabia or Brief Encounter or Bridge on the River Kwai or even the respectably second-tier Dr. Zhivago or A Passage to India.

But you know what? Last night I began watching an HD Amazon stream of Ryan’s Daughter on my Sony 65″ 4K TV. I was sitting there like a 12 year-old and studying the Super Panavision 70 detail and just marvelling at how good it looks. The HD transfer was apparently taken from a 35mm source but it’s staggering all the same. It looks much better than what I recall from some half-forgotten viewing at some Massachusetts or Connecticut bijou (i.e., not a 70mm house).

And I realized that the trick to watching Ryan’s Daughter is to watch it on a monitor like mine, and to ignore as much of the story and the dialogue as possible (not to mention the bland British officer performance by Christopher Jones) and just focus on the visuals and the music.

That opening shot of the steep Irish cliffs near Dingle Bay, and that tiny little ant (i.e., Sarah Miles) running left to right as she approaches the edge…my God! And that footsteps-in-the-sand sequence with Robert Mitchum. 20th Century filmmaking rarely exceeded this level of immaculate care and visual eloquence.

Listen to the kettle and snare drums during the first 14 seconds of this Taxi Driver clip. I so love it when a musical score, the right kind of musical score, tells an audience to sit up and hold onto their armrests because something’s about to go down. Bernard Herrmann was such a champ in this regard, and this kind of just-right set-up — call it “warning music” or “dread scoring” — seems to have all but disappeared from musical scores for the most part. Maybe I’m wrong.

By the way: Herrmann used a kind of low, downbeat sound along with the drums, but what musical instruments am I hearing? Oboes? Bassoons?

The first 24 hours of Fandango pre-sales for Black Panther tickets have set a new MCU record blah blah. Hollywood Elsewhere says “fine but calm down — the second weekend is what counts.” That said, my suspicion is that the first all-black superhero flick — a super-charged concept if I ever heard one — is going to perform like gangbusters for at least two or three weeks, if not four or five. Depending on how good it is. I was initially revved, but the trailers have suggested a fleet, flash-bang quality…a little too gleaming and shiny-car. That said, it looks, sounds and feels like a legitimate, high-throttle superhero vehicle. And my faith in director Ryan Coogler (Creed, Fruitvale Station) has never been shaken.