From a director/screenwriter friend: “I’ve seen The 15:17 To Paris. It’s basically the sort of made-for-cable movie that National Geographic airs with Keifer Sutherland doing the narration. Paul Greengrass probably could have found the meat alongside these potatoes. It’s hard to critique the non-actors playing themselves, as they’re bona fide heroes. United 93 used the actual FAA guy (Ben Sliney) and that was amazing. That same verisimilitude doesn’t happen here.”

Variety‘s Owen Gleiberman: “It’s all startlingly matter-of-fact. For a few minutes, the film rivets our attention. Yet I can’t say that it’s transporting, or highly moving, or — given the casting — revelatory. The film keeps telling us that what took place aboard that train was the fulfillment of something, but neither the event nor the three people re-enacting it seem entirely real. They seem like pieces of reality trapped in a movie.

“It doesn’t take long to grow accustomed to Stone, Skarlatos, and Sadler’s casual semi-non-acting, because they’re appealing dudes, quick and smart and easy on the eyes. The oddity of the movie — and this is baked into the way Eastwood conceived it, sticking to the facts and not over-hyping anything — is that this vision of real-life heroism is so much less charged than the Hollywood version might be that it often feels as if a dramatic spark plug is missing. I’ve long argued for authenticity in movies (especially when they’re based on true stories), but

Last night’s Outstanding Directors of the Year tribute at Santa Barbara’s Arlington theatre went just fine. 90 minutes, over and out. Moderator Scott Feinberg asked interesting, intelligent, well-phrased questions of Christopher Nolan (Dunkirk), Greta Gerwig (Lady Bird), Guillermo del Toro (The Shape of Water), Jordan Peele (Get Out) and Paul Thomas Anderson (Phantom Thread). There were a couple of technical snafus — a Dunkirk clip ran without sound, and a clip that Feinberg introduced was ignored. But overall it was a fine, tight show. At evening’s end SBIFF director Roger Durling sang praises and presented the trophies. 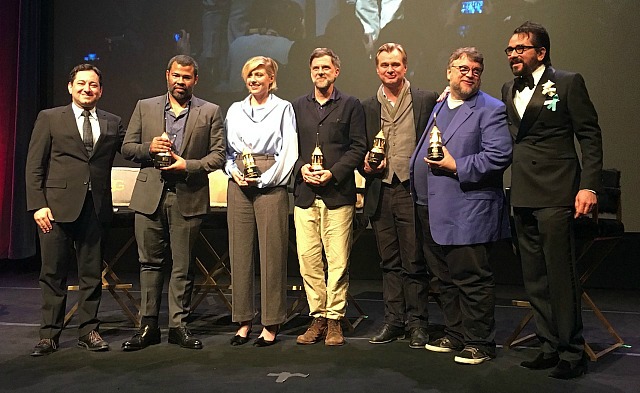 Life Of The Party (Warner Bros., 5.11) is the latest comedy from Melissa McCarthy and husband/co-screenwriter Ben Falcone. The trailer is selling another coarse McCarthy vehicle, this one about a klutzy divorced woman who returns to college to get her degree, much to the chagrin of her daughter (Molly Gordon). Everyone’s been referencing Rodney Dangerfield‘s Back To School (’86), about a wealthy but amiably crude fellow who does the same thing, much to the chagrin of his son (Keith Gordon). But the first film to run with this story (I think) was High Time (’60), in which Bing Crosby played a successful resturateur (i.e., hamburgers) and widower who goes back to college at age 51. 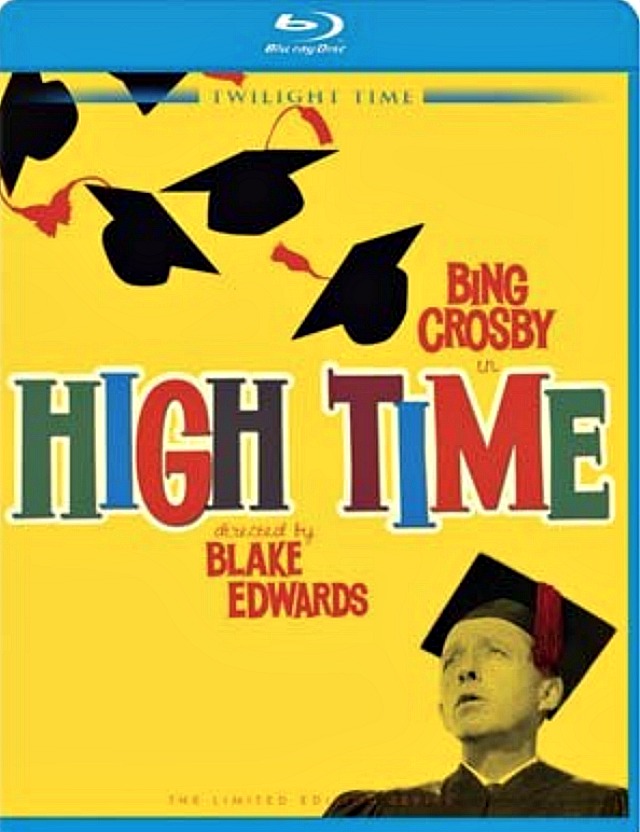 In his 30s, director James Foley was in a pretty good groove. I’m talking about an eight-year period in the ’80s and early ’90s. The R-rated Reckless (’84) was nothing to get overly excited about, but then came At Close Range (’86), which I’ve long regarded as Foley’s near-masterpiece.

Next was Who’s That Girl (’87), a mostly misbegotten screwball comedy with Madonna, followed by an edgy, hard-boiled noir called After Dark, My Sweet (’90), which I don’t even remember. But then Foley rebounded big-time with the flinty, hard-boiled, universally admired Glengarry Glen Ross (’92).

And then — aahck! aahck! — Foley returned to features last year by directing 50 Shades Darker, which no one paid the slightest attention to, and then he doubled down on this dubious association with the about-to-open 50 Shades Freed.

I re-watched At Close Range last year and really re-admired it, and everyone swears by Glengarry Glen Ross. We all have to pay the rent, the butcher and the plumber, but it seems a shame that the guy who finessed these two films and made them into semi-classics is currently reduced to the 50 Shades realm.

Wes Anderson‘s Isle of Dogs (Fox Searchlight, 3.18) will premiere at the 2018 Berlinale on Thursday, 2.15, at 7:30 pm. (Reviews will of course appear that day in the States.) A little more than a month later it will screen as the closing-night (3.18) attraction at South by Southwest.

So Ron Howard‘s Solo: A Star Wars Story is going to be a kind of goofy adventure romp…right? Clearly, Anthony Breznican‘s EW cover story is conveying this and then some. Solo won’t just be witty or bantery or sporadically amusing but “the funniest Star Wars movie yet.”

Have previous Star Wars films been “funny”? They’ve all been occasionally nudgy or quippy to some extent, and were never 100% dramatic (even The Empire Strikes Back had moments of humor). You could argue that The Last Jedi has been the most digressively humorous of all the installments, but it still couldn’t be called comedic. 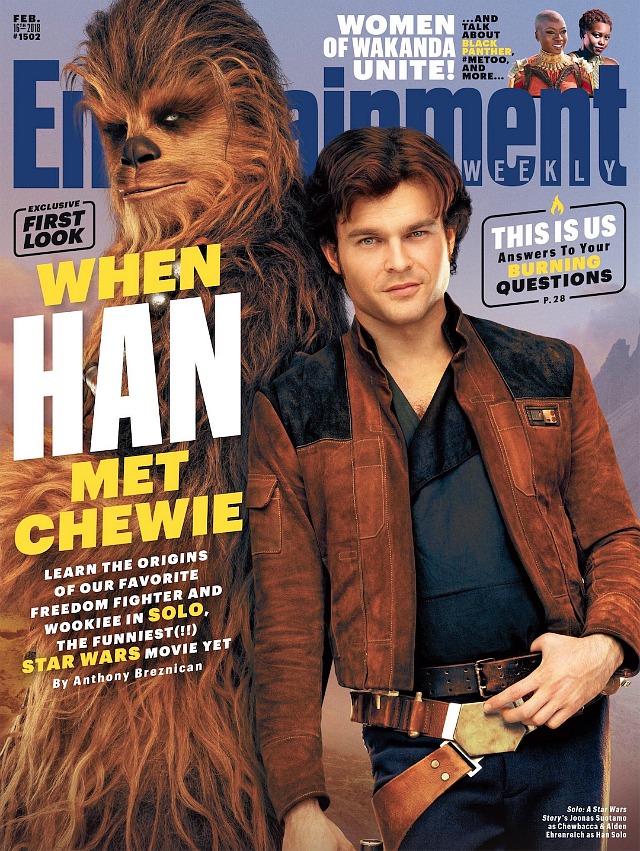 Then again a humorous approach was what original directors Phil Lord and Chris Miller, fired by producer Kathy Kennedy on 6.20.17 and replaced by Ron Howard, had in mind all along…right?

Last summer’s stories about the whacking of Lord and Miller seemed to agree that while Lucasfilm, Kennedy and Solo screenwriter Lawrence Kasdan believed the duo would be supplying a certain comedic flavor, Lord and Miller more or less believed they were hired to make an adventure comedy.

A 6.22.17 Breznican-authored EW story reported that “ever since filming began back in February ’17, Lord and Miller, who are known primarily for wry, self-referential comedies like The LEGO Movie, 21 Jump Street and the pilot episodes for Brooklyn Nine-Nine and Last Man on Earth, began steering the Han Solo movie more into the genre of laughs than space fantasy.”

The presumption was that Howard would be modifying Lord and Miller’s comedic approach, at least to some extent. But now EW‘s cover is all but calling Solo a laugh riot.

67 Comments
If They Say So

Call me a wimp or a candy-ass but I’ve just deleted two posts about Jean-Pierre Jeunet‘s lament about a short sitting-down-dance sequence in Guillermo del Toro‘s The Shape of Water mirroring a similar sequence in Jeunet’s Delicatessen (’91). Too many people I trust and respect told me they thought it was dirty pool to bring it up. I didn’t “bring it up”, of course — Jeunet did in a French newspaper. I simply re-posted because Jeunet seemed (emphasis on the “s” word) to have a valid or at least an arguable point. When too many friends are frowning at you, a little red light goes on and you give things a re-think. So I let it go.

A 2.6 Washington Post story says President Trump wants to stage a big, aggressive, Kim Jong-il– or Mussolini-like military parade down Pennsylvania Avenue. Trump was inspired by witnessing France’s military parade on Bastille Day, but the primary association is with authoritarian regimes looking to strut and sabre-rattle. A just-posted Slate piece says that “impromptu displays of military might are a sign of deep national weakness and insecurity.”

In what realm does a three-word title — Mission: Impossible — Fallout (Paramount, 7.27) — require a colon and a dash? For years I’ve been profoundly irritated by that absurd colon between Mission and Impossible. It was decided upon as a kind of macho symbol — a decisive mark or manly brand, two studly bullet holes — by TV series creator Bruce Geller.

Normally the noun would follow the adjective (i.e., impossible mission) but Geller switched them around. The colon was pointless, of course, but semi-tolerable, I suppose, as a stand-alone title of the CBS TV series (’66 to ’73). But when you add a franchise title (Fallout, Ghost Protocol, Rogue Nation) the marketers were obliged to add a dash, and it’s just not right.