The Academy of Motion Picture Arts and Sciences announced Tuesday evening that an accusation of inappropriate touching against Academy president John Bailey has been investigated and found wanting. In other words Bailey is officially off the hook — i.e., Henry Fonda during the last ten minutes of The Wrong Man.

Bailey’s accuser hasn’t been identified and most likely never will be, but this sounds like the first high-profile accusation of sexual misbehavior to have been discredited in quite a while.

In an in-house memo distributed on Friday, 3.23, Bailey stated that a woman had complained about a single incident that happened more than a decade ago. She alleged that Bailey had “attempted” some sort of inappropriate physical contact while she and the legendary dp were riding in a transport van on a movie set.

“Shot on 35mm, and full of odes to the greatness of analog technology, Kodachrome isn’t nearly as cranky as it sounds, and thanks to likable performances from Sudeikis, Harris and Elizabeth Olsen, it’s an entirely watchable if entirely by-the-numbers throwback to the sweet-and-sour Sundance-style indie films of yore. But there’s a blurry boundary between ‘vintage’ and simply ‘passé,’ and Kodachrome is too often caught on the wrong side of that line.” — from Andrew Barker‘s Variety review, posted on 9.8.17.

I’d see this if I knew that Olsen’s character doesn’t wind up boinking Sudeikis or, better yet, doesn’t do Sudeikis at all but shows Harris a little third-act mercy because he’s dying of liver cancer. Or she does them both — how about that? Anything unusual would suffice.

If only I’d surrendered myself to the guitar in my early to mid teens. Then I could’ve been the cool guy who could play like this at parties, and I could’ve done much better with the girls. Instead I became a mediocre trumpet player and then, in my late teens and early 20s, a mediocre drummer. I was a half-decent writer in junior and senior high, but the light didn’t go on. I got into sketching around eight or nine, but I never felt the current. When I was 16 or 17 I took a summer class at Silvermine Arts Center; part of the curriculum was sketching nude female models. Then I helped edit a 16mm film called “Beyond Embarassment.” Then I got into writing again in my early 20s, and finally I began to feel it. But I still feel bad about not learning guitar.

“Are we really going to have only capital punishment?,” IAC chairman Barry Diller asks Maureen Dowd in 3.24 N.Y. Times profile. “Because right now, that’s what we have. You get accused, you’re obliterated. Charlie Rose ceases to exist.”

I was going to say something along these lines, but I was afraid of the Robespierres. Sexual harassment and misconduct are really bad things, and should never be waved away. But so is driving under the influence, which flirts with destruction and death and all kinds of horrible. If you’re busted for D.U.I. you’ll get fined, your license can be suspended for up to six months and you could go to jail (48 hours to six months). But if the D.U.I penalty was the same as that for sexual harassment or misconduct, the inebriated offender would be taken straight to the hanging tree. 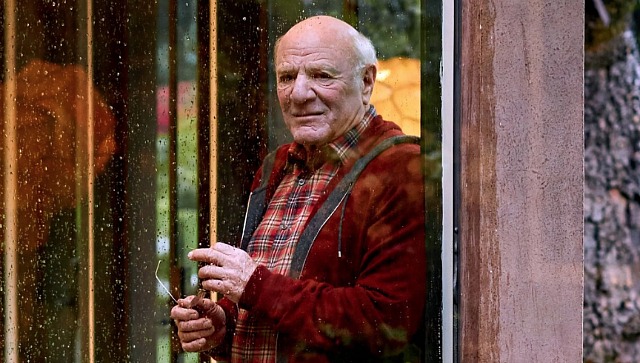 Barry Diller, as pictured in the 3.24 Dowd profile.

Sexual offenders should receive stiff or even harsh punishment, depending on the particulars, but I don’t think their throats should be slit like chickens. After a suitable penalty and/or period of discomfort they should be allowed to show contrition, to demonstrate their remorse and willingness to grow and transcend, to show that they’re not arrogant hooligans. The punishment, in short, should be stern but not overly savage.

“I see it in our companies, where the relationships between people are changing,” Mr. Diller says. “We recently had a formal complaint made by a woman who said that she was at a convention with her colleagues and she was asked to have a drink with her boss. Period. That was the complaint. And we said, ‘Here’s the thing. Anybody can ask you anything, other than let’s presume something illegal, and you have the right to say ‘Yes’ or ‘No.’ If it’s ‘Yes,’ go in good health and if it’s ‘No’ then it’s full stop.’

The title of Adam McKay‘s forthcoming political drama about the diabolical and Machiavellian Dick Cheney is Backseat — not Back Seat. Annapurna will release it on 12.14.18, which is a little late in the season.

What intrigues me about Succession, an upcoming HBO original series launching in June, is that it comes from irreverent British writer Jesse Armstrong (The Thick of It, In the Loop, Four Lions). The Big Short‘s Adam McKay directed the pilot, executive produced with Will Ferrell.

Within ten seconds you want Jeremy Strong‘s character, a Type-A prick and Son of the Big Man who wants it all, to be crushed. The imperturbable Brian Cox plays Big Daddy. Costarring Kieran Culkin, Sarah Snook, Nicholas Braun, Matthew Macfadyen and Hiam Abbass.

Yesterday on Facebook HE’s own Jordan Ruimy lashed out at the shallowness and repetition of the twenty-teens. “As the end of the decade approaches, I fear we’ve basically gone through the worst decade for American movies since the ’80s. It’s a good thing TV is going through an incredible golden age that far surpasses most of the stuff being released in theaters.”

Naturally there’s a corresponding Hadley Freeman piece in the Guardian today: “From Top Gun to Stand By Me: Why the 1980s Is My Favorite Film Decade.”

Remember that Paul Schrader quote from a 2016 Little White Lies interview: “In the ’70s it wasn’t that the films were better, it was the audiences.”

Ruimy response from Tony Joe Stemme: “It’s easy to blame Hollywood for the lack of substantive, reality-based movies that get made, but the blame is squarely on audiences. They’re the ones that have made adult-themed dramas and comedies practically extinct. Folks see only superhero, sci-fi, fantasy and animated features? That’s what Hollywood is going to make. Kramer vs. Kramer made $400M in adjusted gross to today’s dollars. FOUR HUNDRED MILLION. For a divorce drama. Would a movie like that make even a quarter of that today?? Doubtful. Look in the mirror.”

The size of the diner in Edward Hopper‘s “Nighthawks“, particularly for one allegedly based on an actual diner somewhere in the West Village, has always struck me as cavernous. More like an art gallery abruptly transformed into a greasy spoon. Sure enough, in a 1962 interview with Art Institute of Chicago’s Katherine Kuh, Hopper said the painting “was suggested by a restaurant on Greenwich Avenue where two streets meet.” He added, “I simplified the scene a great deal, and made the restaurant bigger.”