Support on Patreon Follow @wellshwood
20 Comments
Thomson Back To Billson

Thomson questioned whether Hitchcock’s 1958 masterpiece is an acceptable fit in the #MeToo era. He said that given Hitchcock’s creepy attitudes toward women on-screen (and his behavior toward Tippi Hedren in the early ’60s) he doubts Vertigo will be #1 again when Sight & Sound critics vote in 2022.

Billson replied that Hitchcock “created many strong and perceptive female characters,” as I summarized yesterday, “and that many of his male characters are weak and vacillating.

“For a so-called misogynist, his films feature a lot of intrepid heroines,” Billson writes. “Even when the women are nominally just love interests, they are unusually plucky and quick-witted.” 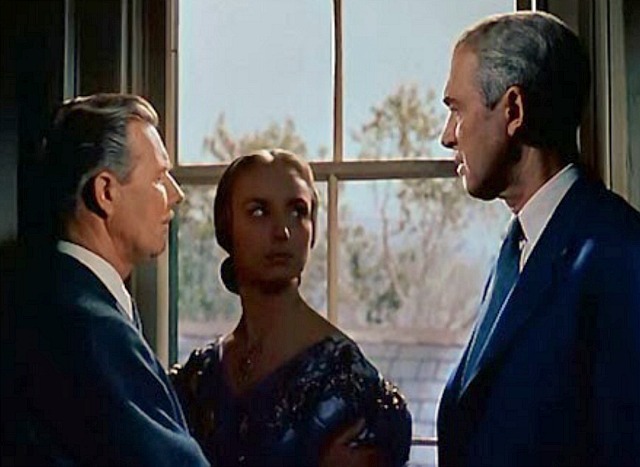 Thomson replied today as follows: “I enjoyed Anne Billson’s article and I agree with a lot of it. But I find it hard to see [Kim Novak‘s] Judy Barton in Vertigo as a ‘strong’ character.

“After all, she has come to San Francisco to survive. She is not quite young any more and there are hints of failure along her way. So she gives herself to a fanciful and very cruel plot. She is being hired (and paid surely) to destroy two people — Madeleine Elster and Scotty Ferguson. There seems every likelihood that she has become Elster’s mistress in that process.

“In other words, she is a tool, being manipulated, and giving up her self. So when she starts to fall for Scotty, she cannot admit it. And after that, dumped by Gavin, she lingers in San Francisco, as if to wait for Scotty to notice her, as Judy. But then she has to be Madeleine again. With further disaster, including her death.

“It’s hard to think of a clearer case of victimhood. or a film so in love with romantic tragedy.”

I felt a slight surge of excitement when I first heard that a woman was climbing up the Statue of Liberty. How can anyone scale a smooth copper statue that doesn’t have any footholds to speak of? Then, of course, the headline turned out to be bullshit. Seven or eight people with Rise and Resist had unfurled an anti-ICE banner at the bottom of the statue, and were then arrested. Then a single woman wearing bright pink shoes climbed up to the base of the statue, and the news media went crazy. Except it was nothing.

Rise and Resist organizer Martin Joseph Quinn told CNN that the woman in question “climbed without our knowledge…it was not part of our action…we are deeply concerned for her safety.” Deeply concerned about what? A woman sitting and chatting with the cops who had climbed up to the same area on a ladder. And yet Liberty Island was evacuated, and at least a couple of news networks treated the incident as a possible act of terrorism.

Here’s a two-year-old Great Escape piece that I have a special affection for. I’m posting it because there’s a vague association between this 1963 John Sturges classic and the 4th of July holiday.

I loved The Great Escape as a teenager and 20something but not lately. Lately it feels too smug and self-satisfied, too much jaunty humor. It’s almost played on a Hogan’s Heroes level. Cast to audience: “We may be portraying POWS but we’re a bunch of cool-attitude 30something actors and we can pretty much do anything we want within reason. (Including making our own potato vodka and throwing a 4th of July party.) It’s like high school, this prison. The German guards and officers are hugely irritated geometry and math teachers. ”Who’s throwing spitballs? Apparently some people in this room want detention!”

The only bad thing that happens during the entire camp portion (or about 65% to 70% of the film) is when one of the three tunnels is discovered by the Germans. That’s it! No other mishaps or mistakes except for the shooting of Angus Lennie‘s Archibald Ives, except in my book that’s a good thing. Because I hate his Brigadoon Scottish accent.

(1) The German camp commanders are far too lenient with the prisoners, who after all have been put into this super-camp because they’re all disobedient bad apples with a high likelihood of trying to escape.

(2) Why oh why don’t the Germans simply post two guards inside each of the barracks so as to spot any possible digging going on?

(3) I despise Richard Attenborough‘s “Big X” character, such that I always feel a slight pang of pleasure when he gets machine-gunned to death near the end (not that the other 49 other prisoners being killed isn’t a tragedy, but at least Attenborough has been shut up for good).

(4) That scene when McQueen and Ives explain to their superiors how they intend to dig their way out under the fence like moles is completely absurd and not even vaguely funny, and McQueen’s delivery of his dialogue is straight out of The Honeymoon Machine.

17 Comments
The Agony of Being Called Passe

In a two-week-old interview the BBC’s comedy honcho Shane Allen said what any programming exec in any major urban city would say about diversity and inclusion.

Allen on the approaching 50th anniversary of Monty Python, a product of Cambridge University grads: “If you’re going to assemble a team now it’s not going to be six Oxbridge white blokes. It’s going to be a diverse range of people who reflect the modern world.”

Allen explained that he was part of “an industry-wide impetus” for people to be “telling stories that haven’t been told.” In other words you have to move on, engage, catch the next wave. On top of which Allen wouldn’t have his job for very long if he wasn’t saying “diversity…hey-ho!”

Naturally this didn’t sit well with former Python Terry Gilliam. Speaking at the Karlovy Vary Film Festival, the director of The Man Who Killed Don Quixote said the following:

“[Allen’s] statement made me so angry, all of us so angry. Comedy is not assembled, it’s not like putting together a boy band where you put together one of this, one of that and everyone is represented. This is bullshit. I no longer want to be a white male, [and] I don’t want to be blamed for everything wrong in the world. I tell the world now I’m a black lesbian…my name is Loretta and I’m a BLT, a black lesbian in transition.”

The great Dutch-born cinematographer Robby Muller has passed at age 78. He was a kind of outlaw stylist, drawn towards urban funk and fringe-y milieus. Muller shot shorts in the mid to late ’60s, and then became Wim Wenders‘ favorite dp in the ’70s and early ’80s (Summer in the City, The Goalkeeper’s Fear of the Penalty, Alice in the Cities, Kings of the Road, The American Friend, Paris, Texas). It was Muller’s noirish-gloom lensing of The American Friend that made me sit up and take notice. My second favorite Muller-shot film was Alex Cox‘s Repo Man. I loved his black-and-white lensing of Jim Jarmusch‘s Down By Law and Dead Man; ditto William Friedkin‘s To Live and Die in L.A. and well as Lars Von Trier‘s Breaking The Waves and Dancer in the Dark. There was nothing very “stylish” about his lensing of John McNaughton‘s Mad Dog and Glory (’93), but it’s one of my favorite ’90s films. Muller’s last fully-shot feature was Michael Winterbottom‘s 24-Hour Party People (’02). He co-shot Jarmusch’s Coffee and Cigarettes (’03), and then apparently retired.

Less likely to be nominated is Judge Amy Coney Barrett, 46, who is strongly favored by devout social conservatives whereas the pro-business crowd is more supportive of Kavanaugh.

From N.Y. Times: “[Kavanaugh’s] work in the George W. Bush administration; the perception that his opposition in his judicial opinions to abortion and Obamacare was insufficiently adamant; and even a 1991 clerkship with Judge Alex Kozinski, a former federal Ninth Circuit judge who retired last year after accusations of sexual misconduct, have all come into question.

“At the other end of the spectrum is Judge Barrett, who has emerged as a favorite candidate of many conservative Christian leaders — both evangelicals and Catholics — who have championed her cause. During her confirmation hearing for the appeals court position, Senator Diane Feinstein questioned Judge Barrett about her public statements. “You have a long history of believing that your religious beliefs should prevail,” Feinstein told Barrett. “The dogma lives loudly within you.”

I miss Sen. Al Franken (third video down) so much that it hurts.