The notion about Die Hard being a great Christmas film has always been lame, favored by mock-ironists. Over the weekend Bruce Willis declared that Die Hard “isn’t a Christmas movie — it’s a goddam Bruce Willis movie.” That puppy has been put to bed.

Initially posted on 11.27.15: The best thing about this photo, which was shot somewhere on the Lower West Side during the spring of ’77, are the folds in the woman’s stockings. That and the eye contact between us and my no-worries expression. And the cigarette. I wasn’t a constant smoker (I would guiltily indulge from time to time and then quit again) but I was definitely stinking of tobacco and nicotine when this shot was taken, and it didn’t seem like a problem. I was half-miserable at the time, but approaching an even more miserable chapter, which was my first three years in NYC (’78, ’79 and ’80) — restaurant jobs, freelance assignments for next to no money, a cockroach-infested apartment on Sullivan Street and then a one-room misery studio on West 4th Street near Jane, bad food (next to no vegetables, tons of sugar), getting half-bombed every other night, typewriter ribbons and white-out, a ghetto blaster and a couple of dozen cassettes for music. And yet for all the fretting and struggling and my particular form of weltschmerz, I was batting somewhere between .333 and .400 with the ladies. 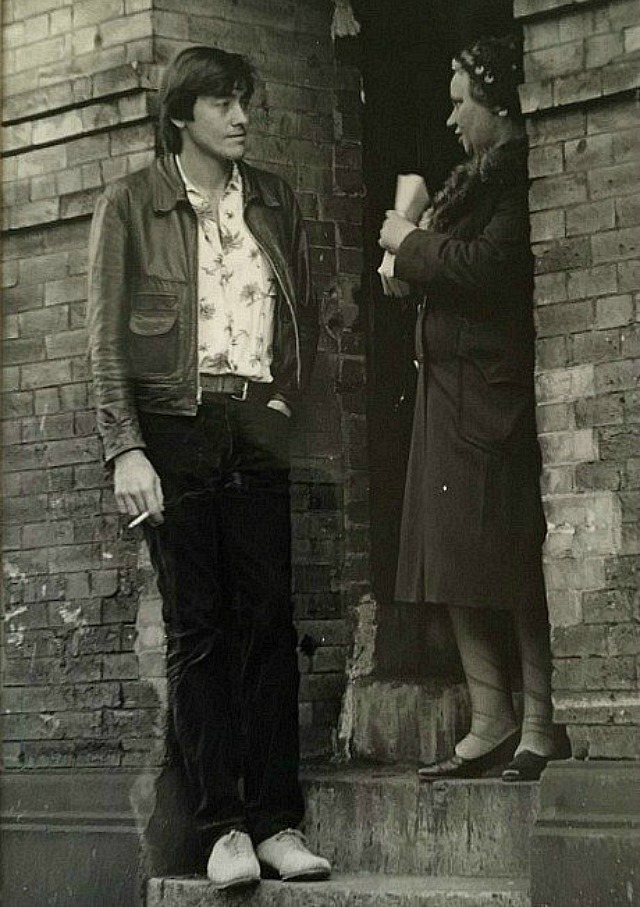 Right now Sen. Elizabeth Warren appears to be the front-runner for the 2020 Democratic presidential nomination, according to a 7.15 N.Y. Times story — “Warren Is Preparing for 2020. So Are Biden, Booker, Harris and Sanders” — by Alexander Burns and Jonathan Martin. But she doesn’t have that dynamic aura of inevitability that Barack Obama had in ’06. Nobody has that.

I resent Warren for not mounting a tough challenge against Hillary Clinton in ’15 and ’16. If she had she might’ve saved us from Trump. That aside she has a passionate, humanist voice, and is tough and scrappy. I like Sen. Kamala Harris a little more than Warren because she’s even scrappier — you could use the term prosecutorial — and I love the idea of a whipsmart mixed-ethnic woman of 53 (she’ll turn 55 on 10.20.19) running against the dessicated, pot-bellied, none-too-bright Donald Trump, who’ll turn 74 on 6.20.20. Feisty Bernie Sanders will be 78 and 79 in 2020 — a little too old. Ditto the mellow and avuncular Joe Biden, who will turn 77 on 11.20.19. Sen. Cory Booker would be the youngest of them all — he’ll turn 51 on 4.27.20 — but I’m somehow not feeling the fervor.

I’m basically okay with Warren but I like Harris more.

12 Comments
Punch His Lights Out 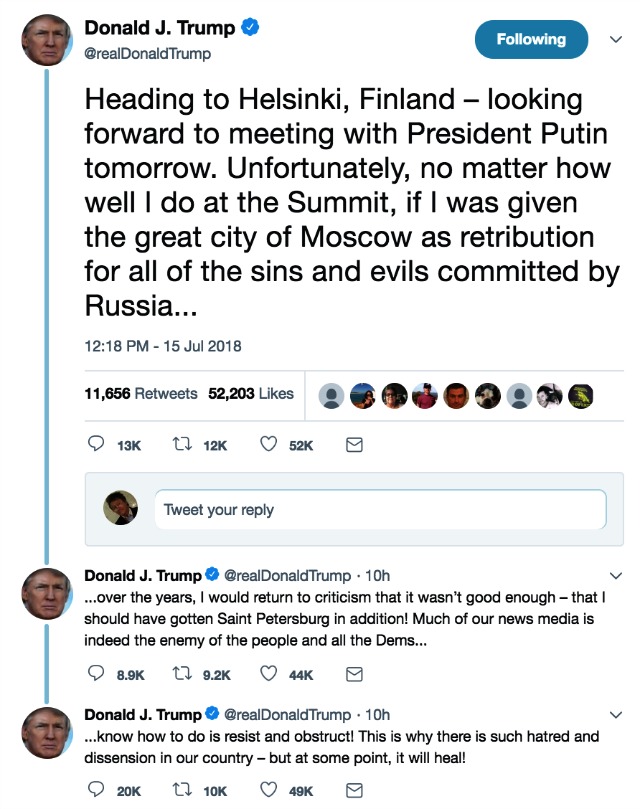 There’s a story behind this fight scene from a YouTube guy named Craig H. I don’t know if it’s true but it sounds good: “Spencer Tracy‘s use of judo was actually suggested by Ernest Borgnine. The latter was talking to director John Sturges about how a one-armed man was going to defeat a strapping two-armed fighter. ‘What about judo?’ Borgnine asked, having learned the martial art in the Navy. So Sturges had Borgnine work out the scene with the stunt men and his double.

“During rehearsals the screen door was left open with Borgnine falling onto mattresses, but during the shooting Sturges locked it. Borgnine plowed into the door and fell to the ground. He was literally dizzy when his character got up and attempted to throw his last punch, which Tracy turned into a one-arm judo flip.” HE quibble: I don’t believe the “literally dizzy” part.

Bilge Ebiri has called Bad Day at Black Rock “one of the greatest films ever made.” I wouldn’t go that far, but it’s definitely a solid stab at a ’50s-styled slow-burn melodrama. Stranger arrives, town sizes him up, hostility simmers, shit hits fan.

Posted on 2.8.17: “What the hell are the residents of Black Rock, California — the tiny hole-in-the-wall ghost town in John Sturges‘ Bad Day at Black Rock — doing there in the first place? No soil, no industry, no oil, no trees, no gold mine, not much groundwater except for the well that the late Kimoko discovered, no lake, no tourists — nothing but rocks and heat and nothing to do except sit around, play cards and scowl.

“What are Robert Ryan, Lee Marvin, Ernest Borgnine, Anne Francis, Walter Brennan and the rest doing there? Are they all…what, living on government relief checks? Why is there a hotel in Black Rock? Who the hell would ever visit?

“Another issue: Are you telling me that in the middle of this parched desert moonscape that Francis’s Liz, the 20something sister of John Ericson‘s Pete, isn’t married or (ahem) ‘seeing’ anyone in town? In a town this dead you know that someone would have stepped up and wooed his way in, and yet Liz could have been played by Thelma Ritter or Mildred Dunnock for all the action she’s getting.

So a few months before they collaborated on the script of Paths of Glory, Stanley Kubrick and Calder Willingham wrote a screenplay adaptation of Stefan Zweig’s “The Burning Secret“, a 1913 novella involving a mother, her adolescent son and a romantic suitor. The script was submitted to the MGM script department on 10.24.56, but MGM execs didn’t like it and the project fell through. Soon after Kubrick and Willingham co-wrote Paths of Glory and the rest is history.

In 1987 or thereabouts Andrew Birkin, who had worked with Kubrick on 2001: A Space Odyssey and Napoleon, wrote and directed his own film of Burning Secret, also based on the Zweig novella and costarring Klaus Maria Brandauer, Faye Dunaway and David Eberts. It came out in ’88 but didn’t cause much of a stir. And what?

As long as we’re talking about dormant Kubrick projects, whatever happened to the idea of HBO producing a version of Kubrick’s Napoleon, which Cary Fukunaga was going to direct with Steven Spielberg producing? It was announced a little more than two years ago.

14 Comments
“Even Plastic Surgery For Dogs…”

You may or may not believe that a healthy percentage of wealthy ostentatious showoffs in this country suffer from a kind of soul cancer, but I sure as hell do. Just look at their drained expressions, re-sculpted faces and horribly misjudged clothing choices…these people are not in a good place. If I had their dough I would casually stroll around with a lot more grace and understatement, for sure.

So I really didn’t know what to do with Lauren Greenfield‘s Generation Wealth (Amazon, 7.20), which is basically a documentary version of her same-titled photography book that came out a year ago. I was saying to myself “I get it, I get it…these people are wretched gargoyles with a lot of inner sadness.” It’s partly a cavalcade of grotesque Kardashian or Trump wannabes making you want to throw up, and partly Greenfield taking a stab at self-examination as she considers her values, upbringing, workaholic lifestyle, family issues.

I respect Greenfield for the ambition behind her doc, but at the same I was shuddering with revulsion. I was also wondering why the wise and wonderful Anthony Bourdain hung himself in a bathroom when it’s obvious that Greenfield’s subjects are the ones who should be having the necktie parties. They’re straight out of Trump Satyricon, and these conspicuous-consumption Americans, Greenfield is telling us, are hastening the fall of Rome. All I can say is that I really wanted to take a shower after it ended.