In last night’s “Best Picture Race Is Over Then?” piece, I expressed shock and disappointment about Kris Tapley‘s 9.4 Variety column, “Oscar Voters Are Sure to Go Gaga for Bradley Cooper’s A Star Is Born.” Tapley said that A Star Is Born has “the muscle to achieve what only three films in movie history ever have: Win all five major Academy Awards (picture, director, actor, actress, and screenplay)…it’s that kind of accomplishment.”

I said I’ve nothing against the idea of Cooper’s film sweeping the Oscars, but I find it deflating to read such a declaration (a) only four days into September, (b) before the Toronto Film Festival has even begun and (c) with awards season having kicked off only six or seven days ago.

Tapley comment-thread response to HE: “[What I wrote is] not a prediction; it’s a description of the film’s capabilities. I would’ve thought that obvious. Who would predict the Best Picture winner right now?”

HE to Tapley: Have you declared that one or two of the other apparent or presumptive Best Picture contenders this year “have the muscle” to achieve “what only three films” have managed in history, which is to win the top five Oscars — Best Picture, Director, Actor, Actress and Screenplay? You said it’s “that kind of accomplishment and more.” What other 2018 award-season release has, in your opinion, brandished this kind of potential or pedigree thus far?

Tapley to HE: “I have not. But that still doesn’t make it a prediction. I also said in the year of pandering with a ‘popular’ Oscar it would be quite the moment to hand a movie like Roma the Best Picture Oscar. That’s not a prediction either. If me saying ‘I’m not predicting this will win Best Picture, I’m just saying it has what it takes to do so’ isn’t enough, well, shit. What’s a guy to do?”

Kris Tapley‘s 9.4 Variety column, “Oscar Voters Are Sure to Go Gaga for Bradley Cooper’s A Star Is Born,” has left me feeling stunned and a little bit down.

A Star Is Born isn’t just “an across-the-board Oscar contender,” he says, but a film with “the muscle to achieve what only three films in movie history ever have: Win all five major Academy Awards (picture, director, actor, actress, and screenplay). It’s that kind of accomplishment, and even more, it makes you realize what this well-worn, Oscar-winning material was capable of all along.”

I’ve nothing against the idea of Cooper’s film sweeping the Oscars. If a film really works and delivers the goods then so be it. But hearing a savvy industry guy like Tapley say, only four days into September and before the Toronto Film Festival has even begun and with awards season having kicked off only six or seven days ago, that the Best Picture Oscar race is over is…depressing? It’s certainly deflating.

Here’s a conversation of President Trump apparently lying to “Fear” author Bob Woodward about how nobody ever told him Woodward wanted to talk to him for the book, etc. I would respect Trump on a certain level if he’d told Woodward something like “look, I strongly suspected your book would be a hit job no matter how I played my cards so I figured fuck it, write what you want and make all kinds of mistakes but I won’t help you.” But no — Trump claims no one ever told him that Woodward wanted an interview. He always wimps out and spreads the horse manure. All kinds of rage and bluster on Twitter, but otherwise a side-stepper and a candy-ass during one-on-one discussions. 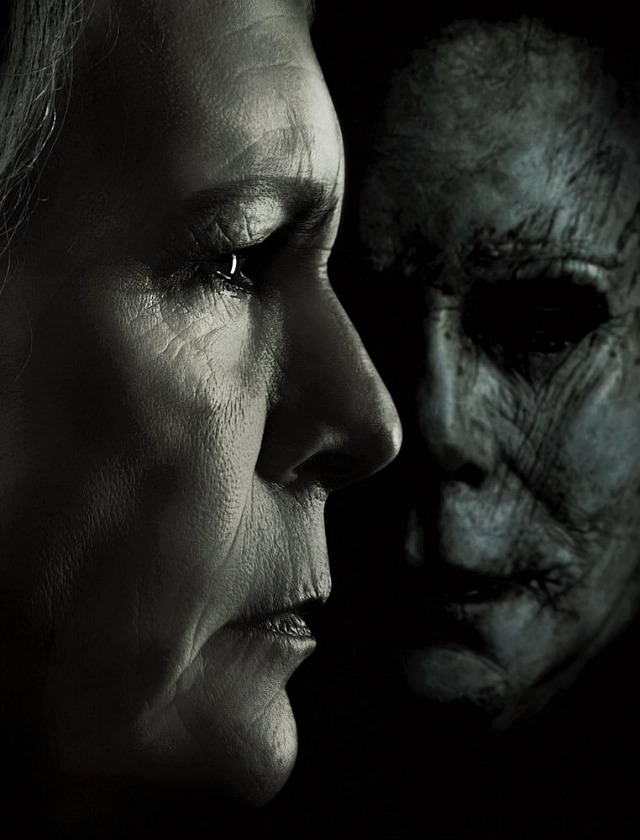 Loads of crappy films have been shot in Monument Valley. The worst are Gore Verbinski‘s The Lone Ranger and Seth McFarlane‘s A Million Ways To Die in the West. The last decent one was Ridley Scott‘s Thelma and Louise. For all their tedious eccentricity and Irish sentimentality, the John Ford films — My Darling Clementine, Fort Apache, She Wore A Yellow Ribbon, The Wagon Master, Rio Grande, The Searchers and Sergeant Rutledge — are still the best. 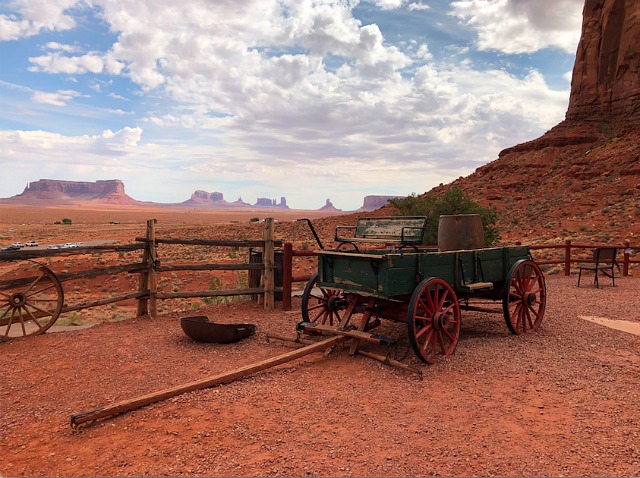 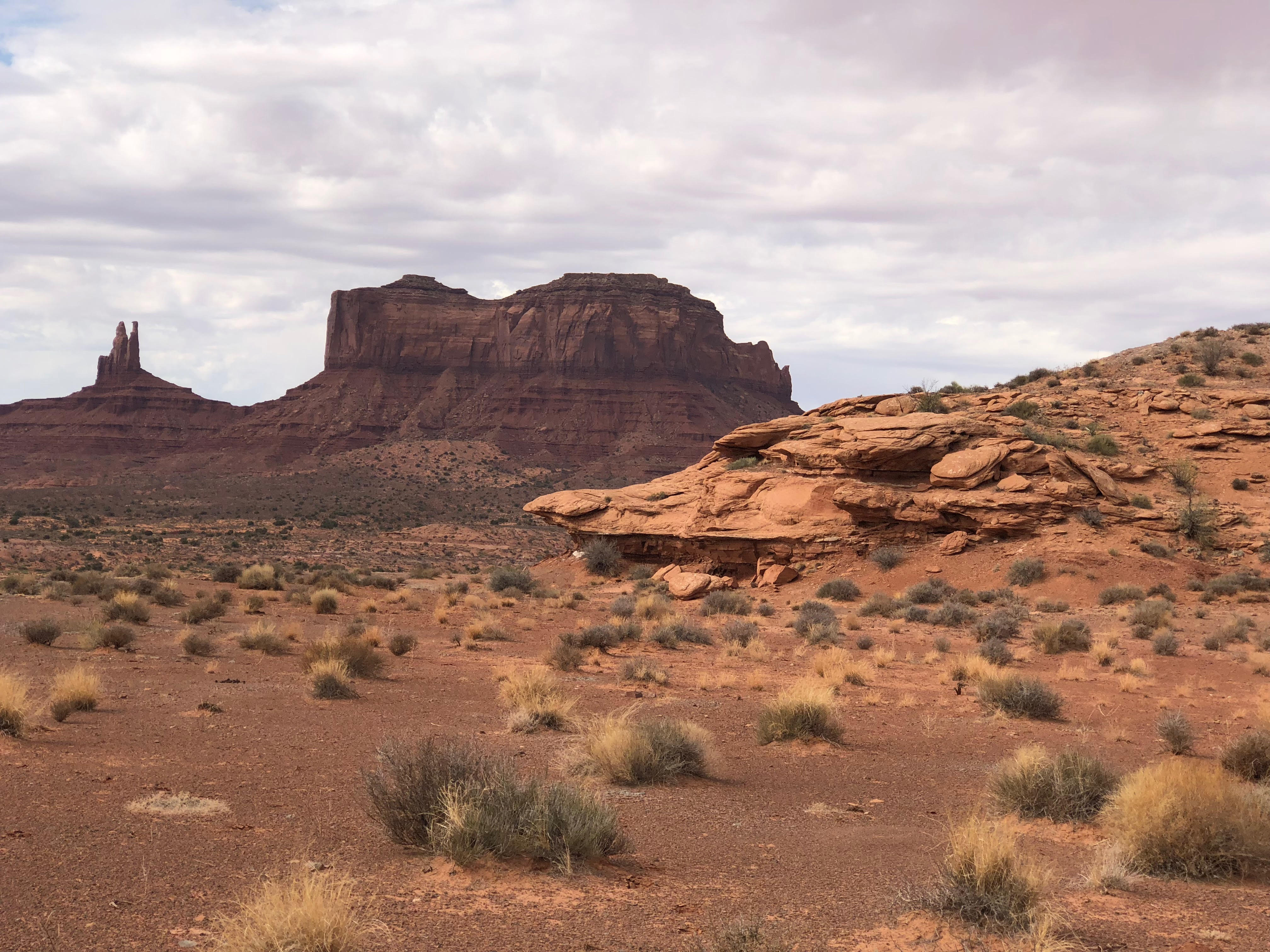 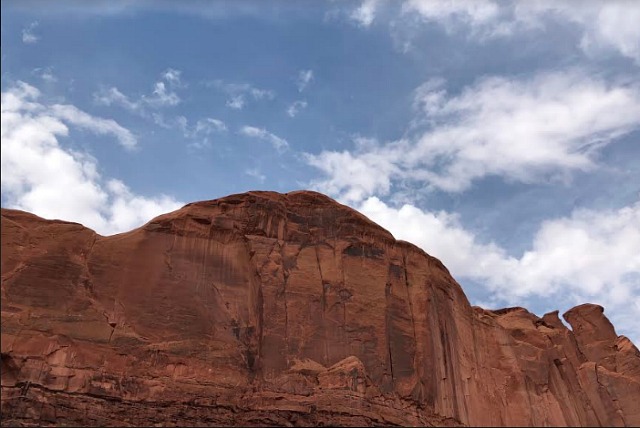 Hollywood Elsewhere agrees with the 44% of critics polled by Indiewire that Alfonso Cuaron‘s Roma was the best film of the 2018 Telluride Film Festival, and with the 50% who named Cuaron as the festival’s best director.

I also agree that Damien Chazelle‘s First Man ranked a close second, but I differ from the pack in having chosen Marielle Heller‘s Can You Ever Forgive Me? as the festival’s third-best film.

The greatest performance, hands down, was given by Melissa McCarthy in Heller’s film. I had an amusing time with Yorgos Lanthimos‘ The Favourite, and thought Olivia Colman‘s performance as the ailing Queen Anne was Telluride’s second best. I also approved of the Favourite perfs by Emma Stone and Rachel Weisz.

Jason Reitman‘s The Front Runner struck me as hugely satisfying in a complex, layered, adultly-seasoned way. I’m sorry I didn’t get to Orson Welles‘ The Other Side of the Wind, and I worshipped Rob Garver‘s Pauline Kael doc. The two biggest disappointments were David Lowery‘s The Old Man and the Gun and Karyn Kusama‘s Destroyer.

I meant to send my answers in to Indiewire‘s Eric Kohn, but I was furiously posting my own stuff between yesterday’s screenings, and then I couldn’t get a decent signal as Chris Willman and I were driving last night from Telluride to Mexican Hat.

34 Comments
No One Wants Anonymity

Cameron Diaz shared this in 2013, when she was 41 going on 42. She wasn’t wrong, but it sounded disingenuous. Some may understand that fame can be a kind of plague or albatross, but everything Diaz has in life came from the fountain of Hollywood success and worldwide fame. HE to Diaz: “Okay, you’ve convinced us, but if you could suddenly become anonymous and divested of all the perks you’re currently enjoying by clapping your hands three times, would you clap your hands three times?”

Pasted on 3.15.18: People‘s Mike Miller has posted a story about how the 45 year-old Diaz “is loving her life outside the Hollywood spotlight.” Quoting “a source”, Miller writes that Diaz and her 39 year-old, tattoo-covered musician husband Beji Madden are “great” and “both very happy living the quiet life.”

Translation: Diaz’s career is in eclipse but she doesn’t want anyone thinking she’s not ready to return if the right part comes along.

New Favourite poster to Joe and Jane Popcorn and Millennials In Particular: “We’re a witty upmarket award-season comedy set in the 17th Century. We realize you may find the idea of two hours of arch, wicked humor slightly intimidating, but rest assured you’ll be quite comfortable. And don’t worry about the sepia-toned colors in the poster — our film is actually bursting with lovingly lighted, Barry Lyndon-like compositions, each glowing with God’s natural palette.” 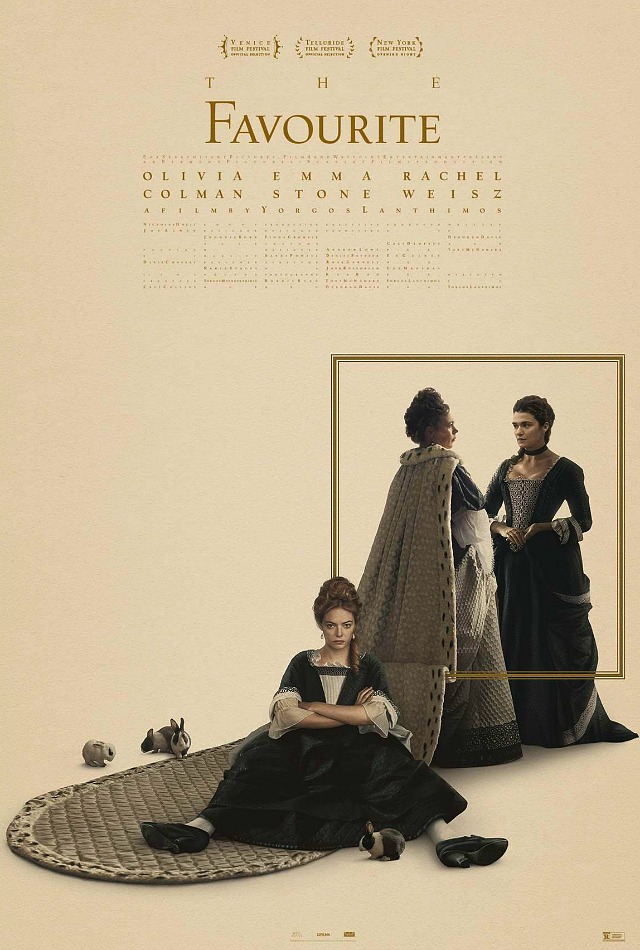 In this trailer for Paul Greengrass‘s 22 July (Netflix, 10.10), I can feel the fleet hand of editor William Goldenberg (Zero Dark Thirty, Argo, Detroit). Not so much an account of the 7.22.11 far-right terrorist attacks but “one survivor’s physical and emotional journey to portray the country’s path to healing and reconciliation,” to go by the notes. Greengrass directed and wrote.

22 July is one of the Netflix films that got yanked from last May’s Cannes Film Festival as a result of that now-infamous dispute.

One of the reasons I’ve seen United 93 eight or nine times is Barry Ackroyd‘s cinematography + the editing by Clare Douglas, Richard Pearson and Christopher Rouse. Remember the “too soon!” crowd? They needed more than five years after the 9/11 catastrophe to sit through a first-rate recreation. I was knocked dead flat.

7 Comments
Overpriced Motel With A View 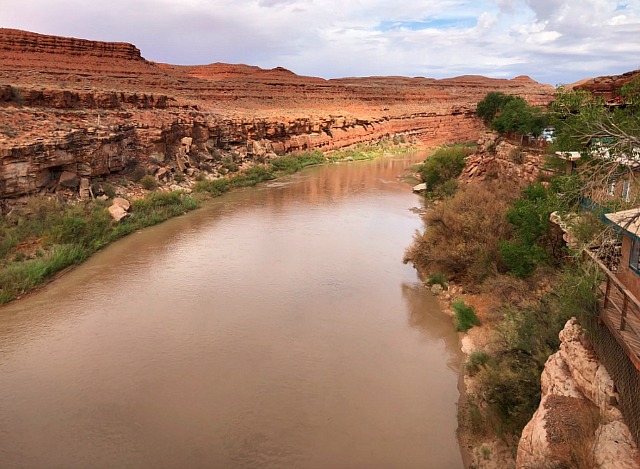 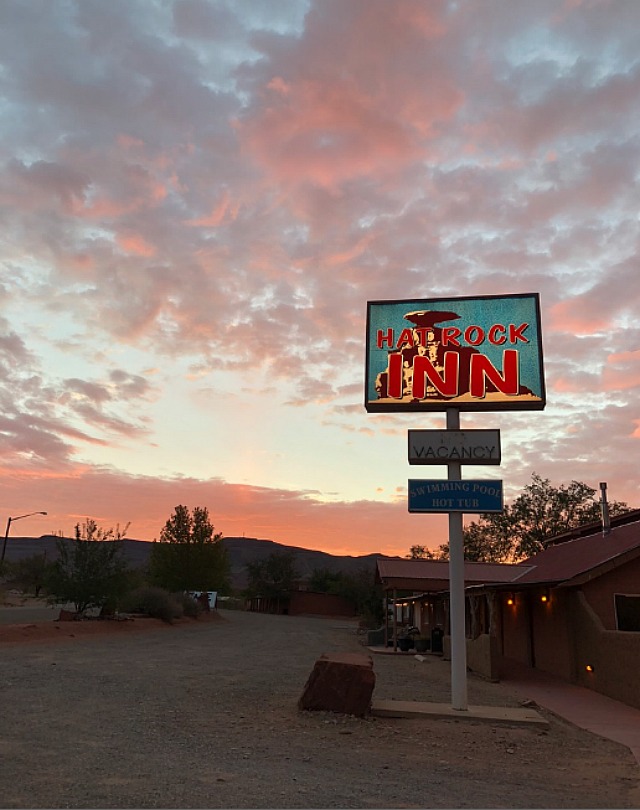 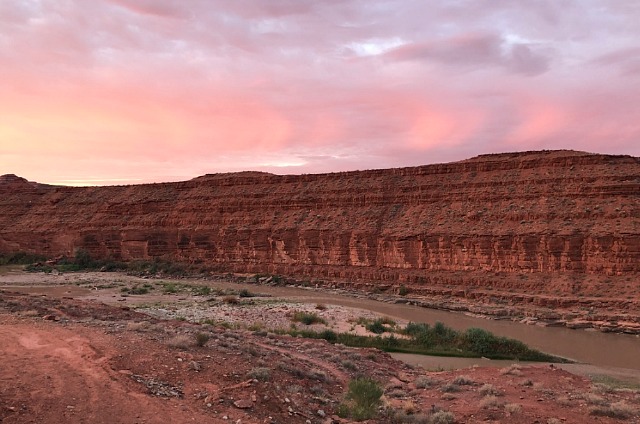 World of Reel‘s Jordan Ruimy suspects that down the road there may be an SJW backlash against Yorgos Lanthimos‘ The Favourite. When someone describes the film in November as a drama about three lesbians being horrid to each other, a Twitter brigade may respond that this kind of negative representation is unhelpful and even arguably homophobic.

I don’t see this happening as the film is obviously delivering a certain kind of dry black comedy that requires venal behavior for the humor to kick in, but never underestimate the snowflake capacity for taking offense. The scheming, viper-like nature of Rachel Weisz and Emma Stone‘s characters is, of course, just an aspect of the same perverse, mean-spirited shit Lanthimos puts in all his films.

Emphasizing: I did not bump Close down to third place. Well, I did but that wasn’t the intention. The Gold Derby format doesn’t allow for ties and, as noted, I’d just seen Can You Ever Forgive Me? when I voted and was feeling a Telluride contact high.

Repeating: I put The Favourite‘s Olivia Colman into my #2 slot, but Colman’s performance doesn’t belong in the Best Actress category. She’s totally supporting. If you regard The Favourite as a kind of palace-intrigue con movie, Queen Anne is the “mark” while Rachel Weisz and Emma Stone are the con artists. Colman is being played the whole time, and lead actors are always the players, not the played.

I’m not saying Weisz and Stone are hoodwinking the queen a la Robert Redford and Paul Newman conning Robert Shaw in The Sting, but ask yourself this: If you were in charge of The Sting‘s Oscar campaign, would you put Shaw up for Best Actor?