HE to Indiewire podcasters Eric Kohn, Anne Thompson: I’m listening to a Best Actress discussion on your latest Screen Talk podcast, and waiting for a mention of The Wife‘s Glenn Close, whom 22 out of 25 Gold Derby spitballers regard as a prime Best Actress contender and whom Deadline‘s Pete Hammond has predicted a nomination for.

Olivia Colman, Lady Gaga, Melissa McCarthy, Charlize Theron, Rosamund Pike and even Hereditary‘s Toni Collette are discussed, but not Close. And all I can say is “you guys are amazing.”

Is this because of Anne’s unfortunate opinion that The Wife is okay but not exceptional? But it is exceptional and actually rather riveting. It’s a “play,” yes, but a very well written and expertly performed one, with a nicely layered build-up to the big payoff at the end. It works, it delivers, it knocks people out.

And what about the metaphor of Close’s character — the brushed-aside but stronger, smarter and more talented wife who lets her husband have it at the end? It fits right into the zeitgeist in a certain sense (i.e., silver-haired women have had it up to here) and is hugely popular with the over-55 set. I’ve attended two screenings with a somewhat older industry crowd, and Close’s performance is a very big thing with them. The after-buzz was palpable both times, trust me, and you guys are ignoring this?

Don’t tell me you’re giving it the Indiewire brush-off because Sony Classics opened The Wife in August. That’s so shallow, so herd-mentality.

Look at this holiday-themed Starbucks cup. Those are flames. You can say “yes, the flames of a living-room fireplace as dad throws another log on and mom serves cups of egg nog.” But one could just as easily say these are the flames of hell. One could argue that flames are more commonly associated with the caverns of Hades than they are with the family hearth. If you were marketing vp for Starbucks would you have signed off on this? On some level the artist who composed this may have been channeling the social hate currents of the Trump era. 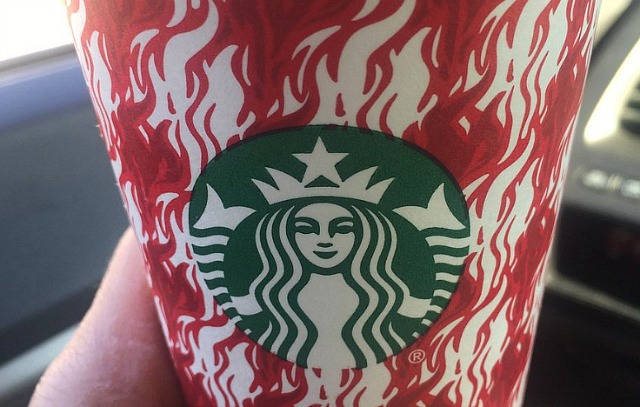 There are some fellows who are a bit irked that Bohemian Rhapsody doesn’t depict Freddie Mercury‘s amorous escapades in franker terms. It’s not gay enough, they mean. Too sanitized. Why not a heifer-ramming scene or a splooge shot a la Taxi Zum Klo? There’s no question the film feels a bit chaste — it probably needed to be a bit ruder, darker, crazier. And maybe a little Mine Shaft action. Hard to say. Then again if Bohemian had been shot in a way that would have been gotten a Guy Lodge stamp of approval it probably wouldn’t have earned nearly $50 million this weekend.

“[Mercury’s] carnal wants, by all accounts prodigious, are reduced to the pinching of a waiter’s backside, plus the laughable glance that Freddie receives from a bearded American truck driver at a gas station as he enters the bathroom. With its PG-13 rating, and its solemn statements of faith in the band as a family, Bohemian Rhapsody may be the least orgiastic tribute ever paid to the world of rock. Is this the real life? Nope.” — from Anthony Lane‘s New Yorker review.

From director-screenwriter friend in Los Angeles: “Quentin Tarantino‘s Once Upon A Time in Hollywood has proven a boon to some local merchants. At least to some extent. A friend’s restaurant was closed down for some recent filming, and the friend wound up making more in a day from Quentin’s film than he does in a month.”

The Robin Hood legend is just that — a one-size-fits-all bag of mythical bullshit that each culture re-imagines and re-invents to suit its own agenda, and then casts a certain sort of dashing fellow — Errol Flynn, Richard Todd, Sean Connery, Kevin Costner, Russell Crowe — to fill the shoes.

But Otto Bathurst‘s Robin Hood flick is obviously an abomination — a lazy, ludicrous, video-game-level wank with Taron Egerton, Jamie Foxx and Ben Mendelsohn in the leads. A Robin Hood fantasy that not only ignores any semblance of historical auras and atmospheres, but totally spits in the face of anyone who’s ever felt a twinge of respect or affection for the previous versions. “We’re totally ripping the past to shreds,” Bathurst is saying. “We don’t care about anything except ideas and attitudes that synch with our 21st Century jizz-whizziness…we don’t care, we don’t care, we don’t care.”

Anyone who finds this shit entertaining needs psychological counseling. Lionsgate will release Robin Hood on 11.21.18.

The dishes riff [roughly the 6:50 mark] is beautiful. Partial transcript: “Sometimes I’m at home and I’m doin’ the dishes. And I say [to Michelle], ‘Hey look, I’m doin’ the dishes.’ And she says, ‘That’s the first time in a month that you’ve done the dishes. Don’t brag about it.’ [But] I’m puttin’ a positive spin on things! Then she asked me, ‘What’d you do wrong? Otherwise you wouldn’t be doin’ the dishes.'”

20somethings could really make a significant (perhaps a crucial) difference on Tuesday, but will they? 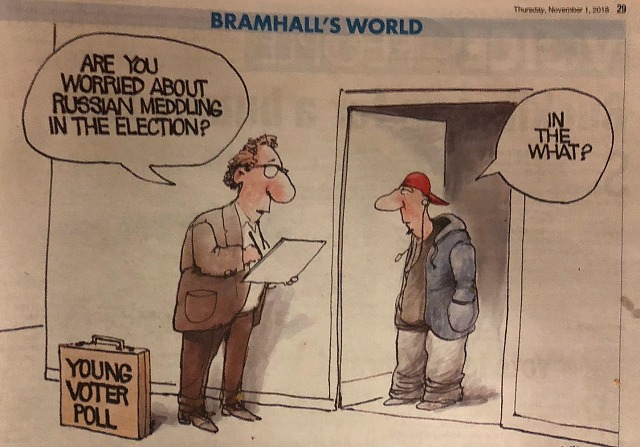 Yesterday morning pugnacious Alec Baldwin was arrested in downtown Manhattan after allegedly punching a guy over a street-parking dispute. People always blame Baldwin for being ill-tempered (which he obviously can be from time to time), but street fights are always about the particulars. This morning I read TMZ’s initial account of the altercation, and sure enough it contains the “obiter dicta” — words in passing — that reveal what really happened.

Baldwin may have slugged the 49 year-old guy who took his parking spot on East 10th Street near Fifth Avenue, but the person he really wanted to wallop was “a friend who was holding the spot for him” but failed in this minor duty.

TMZ: “Our law enforcement sources tell us Alec had a friend holding the spot for him, but the other man swooped in.”

What kind of parking-spot-protecting “friend” lets a stranger “swoop in”? Honor requires that you protect the spot with your life. You stand there like the Colossus of Rhodes, like a Lee Marvin-styled linebacker and hold your arms up when a stranger tries something — “Forget it, dude.” But Baldwin’s friend candy-assed out.

Baldwin was almost certainly shattered and crestfallen that his friend would let him down, but nobody punches someone in his own corner so Baldwin transferred his anger and punched the other guy. Except he was really punching his friend…see? Heightened emotions can be tricky and complex.

If I was Baldwin I would offer this explanation to the guy he slugged along with an apology, and it would all go away. And then I would drop the “friend.”