Best Actress: Toni Collette in Hereditary.
HE comment: Collette’s performance is top-grade, but I’m surprised they didn’t give it to The Wife‘s Glenn Close.

Best Documentary: Hale County This Morning, This Evening
HE comment: Haven’t seen it..

Bingham Ray Breakthrough Director Award: Bo Burnham, Eighth Grade
HE comment: Should have been a tie between Burnhamn and Hereditary‘s Ari Aster.

Audience Award: Won’t You Be My Neighbor?
HE comment: Sure.

Since Federico Fellini‘s La Strada, what films have ended similarly? The main protagonist finally realizing who and what he is, and with no path to redemption.

There’s Woody Allen‘s Sweet and Lowdown, of course, but the ending was a fairly blatant homage to Fellini’s original. You could argue that the ending of The Godfather, Part II fits the description. A slow dolly-in upon Michael Corleone, alone at his Lake Tahoe manse, thinking back to who he was 19 years earlier, right after the 12.7.41 Japanese attack on Pearl Harbor. Except the frosty Michael doesn’t indicate an emotional reaction. (It’s not in him.) And there was a creepy episode (#15) of Boris Karloff‘s Thriller series called “The Cheaters”, and it ended with the lead protagonist (played by Harry Townes) looking at himself in a mirror and seeing a beast. Others?

The Rene Magritte-like Birds of Passage poster speaks for itself. I believe that’s a skull under the red tunic. The Bumblebee poster looks odd, off. An absence of clarity, of balance. Randomly thrown together. Hailee Steinfeld is anguished about something? John Cena seems forlorn about something. 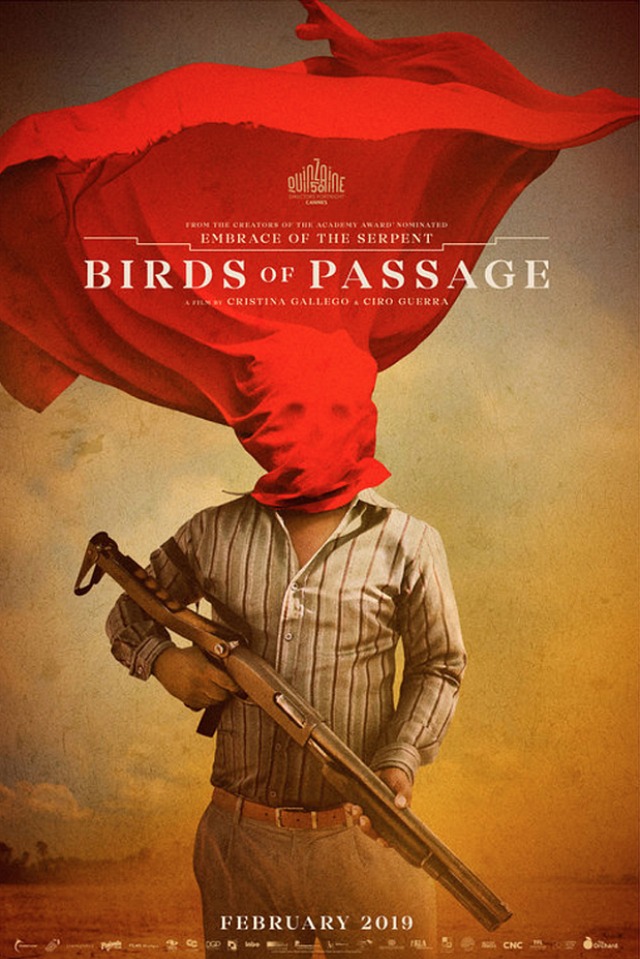 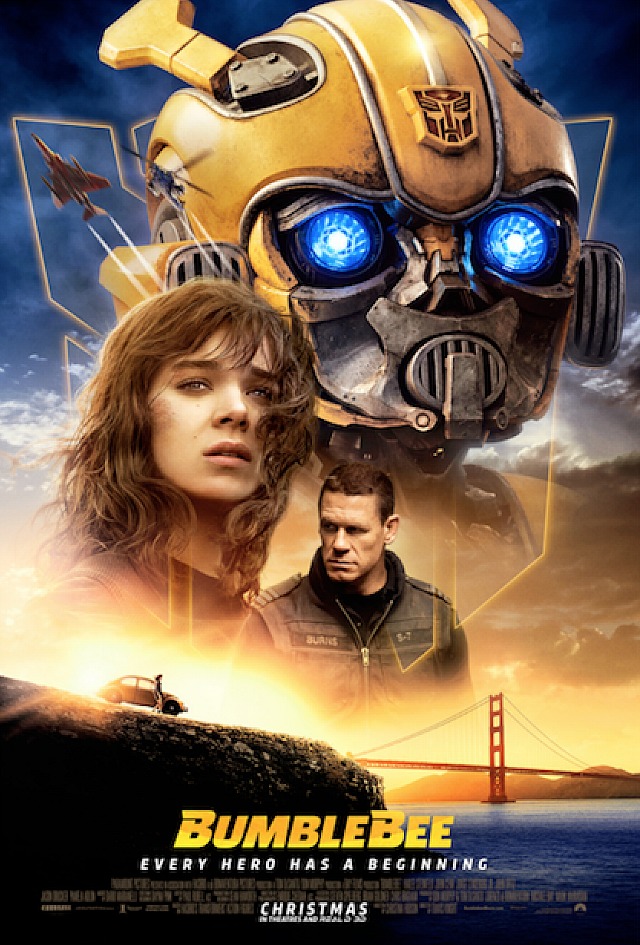 On 11.22 Hollywood Elsewhere posted a grand tally of just under 90 2019 films (“The Whole Shebang“) — The Irishman, Once Upon A Time in Hollywood, Gemini Man, You Are My Friend, Triple Frontier, Official Secrets, Greyhound, Little Women, The Woman in the Window, etc. The presumption is that a significant portion of these will probably feel at least moderately satisfying to smarthouse viewers.

Here’s an alternate-universe rundown of 2019 hotties, courtesy of @ComicBookRumors: 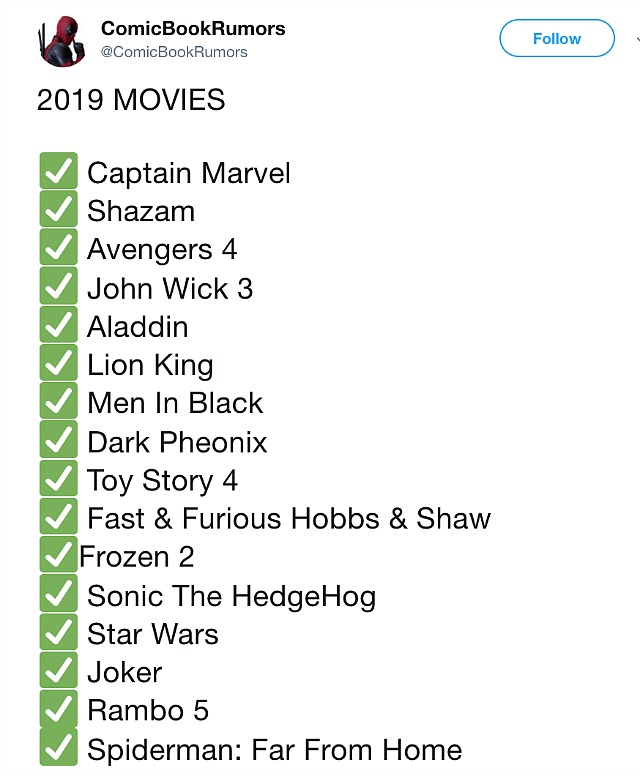 From AP’s Bernardo Bertolucci obit, posted in today’s N.Y. Times: “‘Maybe I’m an idealist, but I still think of the movie theater as a cathedral where we all go together to dream the dream together‘ — Bertolucci upon receiving a DGA award for The Last Emperor (’87).

From “Reverence, Churches and Moon Dust,” posted on 7.17.06: “Every time I walk into a plex or a screening room it’s like entering St. Patrick’s on Fifth Avenue or Sacre Coeur in Paris. If you’re not feeling awe as you enter a theatre, why go? What is moviegoing if not a ritual about great possibility? The chance that something jolting or transcendent might happen?”

Posted on 5.12.18: “Late last night I saw Cristina Gallego and Ciro Guerra‘s Birds of Passage, an indigenous drug-dealing film that’s been justly celebrated as a fresh nativist take on the Columbian drug boom of the ’70s and ’80s, using the perspective of the Wayuu culture.

“The dramatic theme is roughly the same we’ve been seeing in drug-dealing movies for decades, which is that (a) dealing will pollute your soul and (b) sooner or later anyone who seeks to profit from big-time drug dealing will wind up dead on the floor. Sooner or later all dealers form gangs and go to war with each other, etc. The principal Wayuu characters start out simple and pure and just looking to better their lives, and by the end they’ve all taken a bullet or several.

“The perspective is interesting, but it’s basically the same bouillabaisse. During the last third you’re saying to yourself, ‘Okay, everyone’s gonna die, this scourge will consume itself, the black birds of death are circling.'”

I was raised to understand that life is generally not a breeze or a bowl of cherries, and that you won’t experience much in the way of fulfillment or security without putting in a lot of hard work and also applying a fair amount of discipline and caution at all times, at least during weekdays.

I was also brought up on the idea that the best women work just as hard as men, and that the best marriages — the ones that work out, at least — are partnerships based on two ideas. One, life is nothing without joy, kindness, caressings, imagination, optimism and healthy diets. And two, neither party can lean too much on the other and that both have to contribute what they can and pull their own weight, etc. What’s past is past, and it’s best to look forward.

Throughout my 20s I had a fairly low opinion of shrinks (i.e., psychologists, psychiatrists). And for good reason, I felt. It had to do with my assessment of a certain suburban therapist — a chilly, officious guy in his 40s whom my parents arranged for me to see on a weekly basis when I was 17.

I had a regular weekly appointment with this asshole on Tuesday or Wednesday evenings at 7 pm, and as it happened one of my meetings came right after suffering a brutal beating from my dad. Our fight had erupted in the kitchen during dinner and had resulted in a gash on the side of my head and a good amount of blood soaking my shirt.

There were five distinct Bertolucci eras or episodes — early, earthy, scruffy (The Grim Reaper, Before The Revolution), Glowing, Sensual, Perverse Perfection (The Conformist, The Spider’s Stratagem, Last Tango in Paris, 1900), The First Stumblings (La Luna, Tragedy of a Ridiculous Man), Return to Glorious Form (The Last Emperor, The Sheltering Sky) and the Long, Gradual, Modestly Respectable Downfall (Little Buddha, Stealing Beauty, Besieged, The Dreamers, Me and You).

For 90% of his followers, Bertolucci’s lasting glory stems from episodes #2 and #4 — the other three don’t count. If he had only made The Conformist, Last Tango in Paris, The Last Emperor and The Sheltering Sky, his world-class reputation would be assured.

Bertolucci talked like a Communist in the ’60s and ’70s but from the early ’70s on he loved going first class. He was a delirious sensualist, a colorist, a composer, a wearer of the finest clothing, a pageantist, and always a maestro of tracking shots. He and Vittorio Storaro, hand in hand, joined at the hip…brothers of the softest light and the most magical of colors (particularly amber).

If there’s one term or phrase that sums up Bertolucci’s spiritual or directorial signature, it would be “exquisitely composed decadent luxury.”

Remember that elegant party in 1900 when a huge white horse is led into a living room full of rich swells sipping champagne, and the owner tells everyone that the horse is named Cocaine? That was Bertolucci. He was every element in that scene…the guests, the horse, the cocaine, and certainly the audacity of leading a magnificent four-legged animal into a beautifully decorated living room and saying quite calmly “say hello to my gentle friend…for he is you and you are he and we are all together.”

Bertolucci was an absolute God between the releases of The Conformist, which opened stateside on 10.22.70, and Last Tango in Paris, which opened on 2.7.73. Two and a half years of being the absolute Zeus of filmmakers, and everyone on the planet was bowing down, including the lordly-at-the-time Norman Mailer.

If you want to taste a bit of what was going on after Tango opened, read this Mailer essay — “A Transit to Narcissus” — which appeared in the New York Review of Books.

Hugs and condolences to family, fans, friends, colleagues…this is a big one. And no, the ridiculous twitter outburst of 2016 over misinformation about shooting the Last Tango butter scene isn’t worth reviewing. 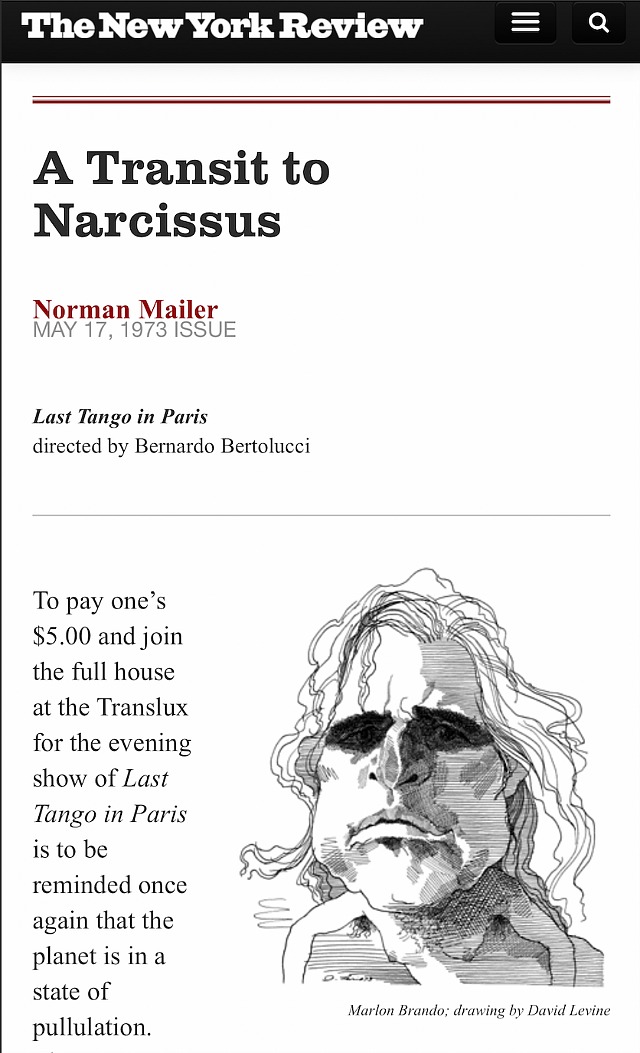 This shot (taken by whom?) is an instant classic — right up there with that horrific shot of Phan Thi Kim Phuc (i.e., the Vietnamese “napalm girl“), taken by AP photographer Nick Ut in 1972. This image is stamped upon Donald Trump‘s legacy — he’ll own it for the rest of his life, and just as certainly it will own him. 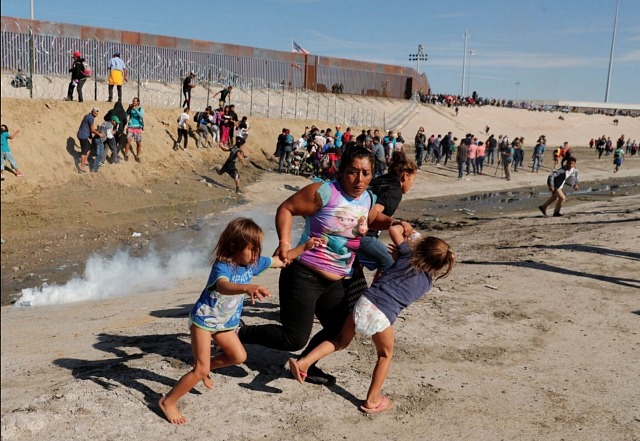