I’m not a fan of Josie Rourke‘s two-week-old Mary, Queen of Scots (Universal, 12.7), but this, no shit, is one of best red-carpet photos mine eyes have ever beheld. Seriously. Great angle, perfect lens, whatever. Here’s my 11.16 review. 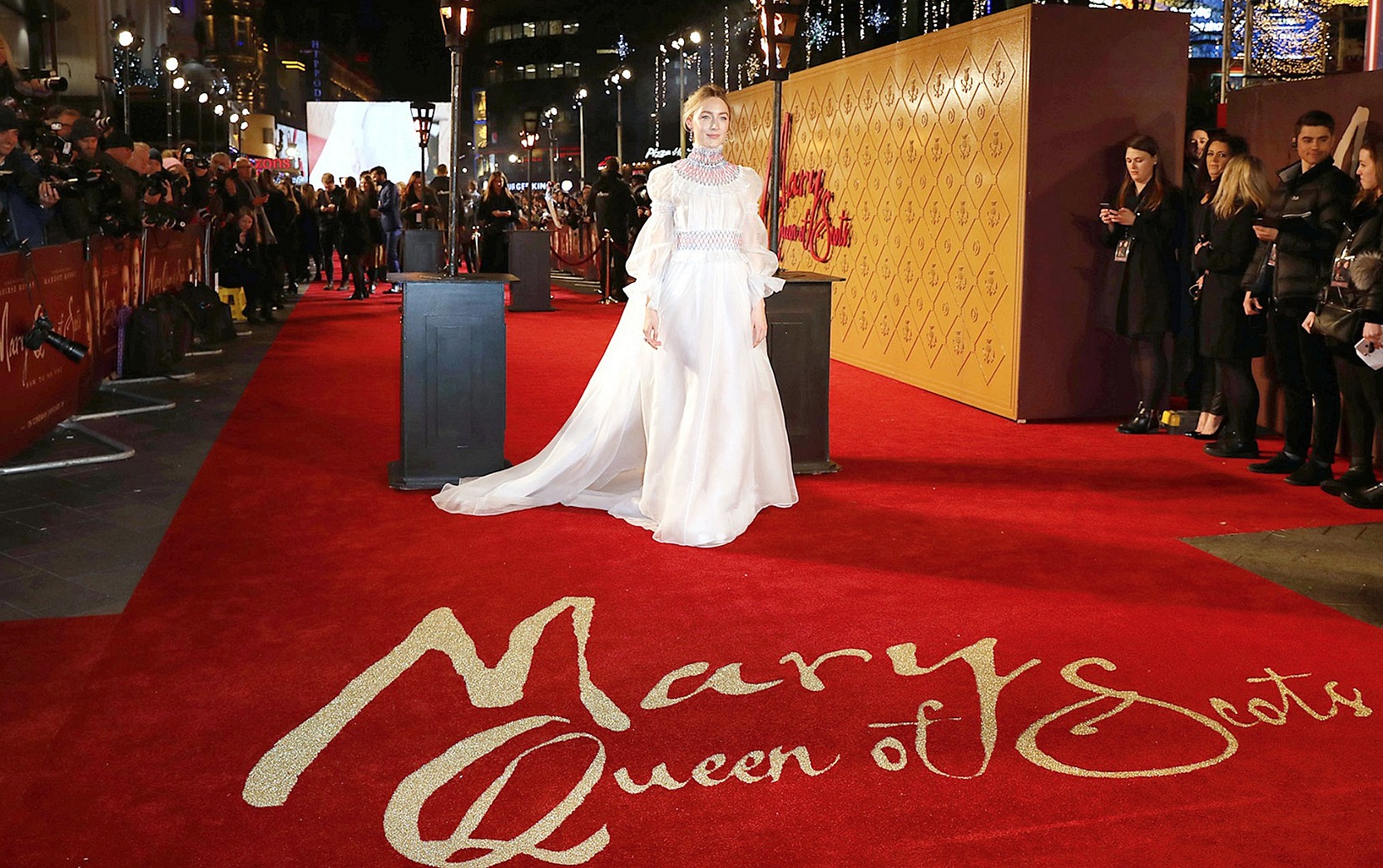 You’re a seasoned screenwriter on retainer with a prominent studio-based producer. He/she is excited by the Nuro-designed, driverless, grocery-delivering bot, and has told you to either (a) integrate the bot into an existing thriller screenplay that’s waiting green-light status or (b) create your own thriller in which the bot is part of action sequence of some kind. He/she wants some ideas written out before he/she leaves for a lunch appointment at 12:30 pm. You have 90 minutes to deliver. And…?

The moral and ethical tongue-lashings of Homeland Security Secretary Kirstjen Neilsen, delivered on 12.20 by Rep. Luis Gutierrez (D-Illinois) and Rep. David Cicilline (D-Rhode Island), were, to my ears, musical. I didn’t really savor them until this morning, but whatever.

This yuletide-and-jungle-bells Die Hard trailer isn’t a parody — it was created by 20th Century Fox marketing.

The best thing about this jerk-off trailer is the holiday-decorated title art that appears at the end.

Posted on 7.15.18: “The notion about Die Hard being a great Christmas film has always been lame, favored by mock-ironists. Over the weekend Bruce Willis declared that Die Hard “isn’t a Christmas movie — it’s a goddam Bruce Willis movie.” That puppy has been put to bed.”

During a 12.12 Ankler podcast, Richard Rushfield and I were coming to the same conclusion about the Best Picture race, which was that things seemed to be gradually tilting in Black Panther‘s favor. It may be the most compelling Marvel superhero film ever made, but it’s not the year’s best by any stretch. (I’ve said over and over that it has a great final hour.) And that’s not the main consideration.

What matters is that it seems to have the strongest (i.e., most progressive) Best Picture narrative. Voting for Black Panther will make a lot of Academy voters feel good about themselves, more so than if they vote for Roma or A Star Is Born or Green Book. And that’s the bottom line.

Earlier in the season I was telling myself that Ryan Coogler‘s film would certainly be Best Picture-nominated, if for no other reason than the fact that Black Panther is the only 2018 contender that historians will be readily discussing 50 years from now. As I wrote on 11.11, it’s “obviously an historical groundbreaker, the greatest African-American mythology film ever made, and” — I was mocked for this — “the most socially and emotionally resonant Marvel film ever released.”

But the more I meditate about the Best Picture race, the more it hits me that Black Panther is holding the best cards.

“The tools of conquest do not necessarily come with bombs and explosions. There are weapons that are simply thoughts, attitudes, prejudices. For the record, prejudices can kill and suspicion can destroy, and a thoughtless search for a scapegoat has a fall-out all its own. And the pity of it is that these things cannot be confined to the Twilight Zone.”

Just as Republican dirty-trickster Lee Atwater offered death-bed apologies for his attack-dog zeal in ruthlessly torpedoing Democratic opponents (including Michael Dukakis and Gary Hart), the day will come when certain “woke”-sters will be experiencing similar guilt pangs and looking to explain their Salem-witch-trial attitudes, and specifically for having helped to eliminate or smother or otherwise push out of the way those who were fingered as imperfect or flawed or insufficiently woke.

“Weinstein, Moonves, Louis C.K. and the others…good riddance,” some former SJW will say from his or her hospital bed in 2053. “The 20-teens ignited a cultural sea-change that was necessary and cleansing, and I’m enormously proud of that. But I didn’t mean to be so zealous in going after those who didn’t live up to the woke paradigm outside the sexual harassment and assault realm.

“I wasn’t trying to hurt anyone, not really — I just felt that society needed to be more inclusive and Hollywood product to be more representational, and I felt at the time that ruining the lives of certain people who didn’t seem to be ‘on the team’…I felt that destroying a few careers was a reasonable price to pay for making the world into a better, fairer place. Like a lot of others at the time, I was using the age-old rationale that ‘you can’t make an omelette without breaking a few eggs.’ But I’m sorry now. I didn’t intend things to get out of hand.”