Yesterday Variety‘s Matt Donnelly reported some particulars about what a lousy year 2018 was for Megan Ellison‘s Annapurna. Three wipeouts and a total loss of around $37 million, give or take.

Why? Because Ellison is famously into quality for its own sake, and doesn’t (or didn’t, at least) believe in greenlighting possible commercial successes as much as smart, sensitive, upmarket films that will delight film festival crowds along with her enlightened, SJW, politically correct hipster colleagues and feminist friendos.

The biggest calamity was Adam McKay‘s Vice, which cost $65 million to make but lost between $15 and $20 million.

Be honest — you’re the final “yes or no” person at Annapurna, and certain voices want you to greenlight an adaptation of a 1974 James Baldwin novel that, despite Jenkins’ intention to bathe it in Wong Kar Wai-styled lighting, others regard as a serious downer. It’s basically about a young black couple in Harlem who are totally in love with each other, but then the young husband gets jailed for a rape he didn’t commit and he winds up staying in the clink for the rest of the film, in part because his wife’s mother is unable to persuade a Puerto Rican woman who misidentified the husband as the culprit to recant her testimony.

In all honesty, would you greenlight Beale Street?

And would you greenlight a hardboiled police thriller with Nicole Kidman as a gray-faced zombie cop who goes from one encounter to another speaking in an affected, raspy-voiced, all-but-unintelligible Clint Eastwood whisper? A movie that was shot in order to prove that a crusty, hard-boiled undercover woman detective can be just as existentially blighted and inwardly destroyed as any male badass cop — would you say “yeah, sounds like a winner”?

If you’re enjoying a taco or a burrito with a nice lady in some outdoor location, you’re not allowed to lick your fingers between bites. If you do that, two things will happen. One, you will become an eternal pig in her eyes. And two, you will absolutely and irrevocably forfeit any chance of ever having sex with this woman for the rest of your life. Licking your fingers while eating is in the same realm as farting loudly and then pulling your pants down, wiping your ass with a newspaper and then fanning the air in order to dissipate the aroma. Forget it, finito, you’re done. 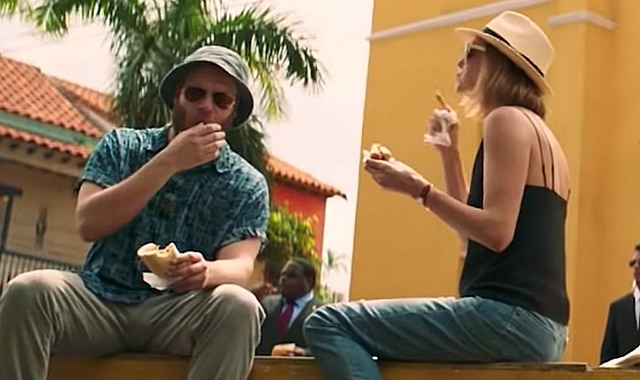 It’s been just under a month since my agonizing fall in the Sierra Nevadas (slippery snow, flat on my back). I’m happy to report that I’m somewhere between 65% and 70% recovered. I still walk around like an 80 year-old, but without a cane. Simple exertions that caused horrible pain two or three weeks ago (getting out of bed, climbing out of a car, coughing or sneezing) don’t hurt as much now. Lifting anything heavy (like groceries) is still a dicey idea, but at least I’m off the pain meds. I won’t be able to leap into the air and click my heels like Fred Astaire for another couple of weeks, but the worst is over. Right now I’m just trying not to bang into anything or, God forbid, slip on a banana peel.

HE colleague Jordan Ruimy is hearing whispers that Dexter Fletcher‘s Rocketman will have a big Cannes Film Festival premiere, possibly an opening-nighter, almost certainly out of competition.

For the fifth or sixth time, Hollywood Elsewhere is foursquare-opposed to this Elton John biopic for the simple fact that (a) I loathe Taron Egerton, who has the titular role and (b) the singing (either by Egerton or someone else) sounds like a cruise-ship John imitator. Rami Malek actually sounded like Freddie Mercury so what was the problem this time?

Bryan Singer might be a serial sexual abuser and difficult as hell to work with, but at least he got the Bohemian Rhapsody singing to sound right. My insect antennae can just sense that he’s a much, much better director than Fletcher ever will be. Rocketman may to be a decent film in other respects, but the absence of a vocal-sound-alike element is a huge negative.

Ruimy also reports that “two separate sources” confirm that Quentin Tarantino‘s Once Upon A Time in Hollywood (Sony, 7.26) is indeed going to the festival. I forecasted this possibility on 2.26.

One thing good about Beto O’Rourke intending to finally announce his Presidential candidacy this week (not at some big staged rally but on social media, according to a source) is that at least he’ll have declared before Uncle Joe “Mike Pence is a decent guy” Biden pulls the trigger. At least that.

Said it before, saying it again: Biden’s candidacy will be strictly about his legacy and his mostly boomer-aged supporters doing a farewell nostalgia lap. Boomers (Trump, Biden, Elizabeth Warren and Bernie Sanders included) are finished as far as steering this country into the future is concerned. The 2020 Democratic nominee has to be youngish (Beto or Kamala realm) and reflective of the spirit and convictions of under-45 voters.

WATCH: If Beto O'Rourke makes a 2020 run, what lane does he occupy in the race? #MTPDaily@TexasTribAbby: "Reminds me very much of Obama '07…you can feel the ground shake as he comes in, in a way that was different from previous candidates entering." pic.twitter.com/4oUmDrUpmS

With curly, carefully styled, longish but not too long hair. And probably shiny moussed.

The History Channel series is called Jesus: His Life (debuting 3.25), and the actor portraying him is Greg Barnett, who could play a young Felix Cavaliere in a biopic of The Rascals, or perhaps a good friend of Anthony Soprano, Jr. 15 years ago. He could certainly portray any 2019 resident of Jersey City, Hoboken, Asbury Park or Fort Lee on a reality series. His face screams “PATH train.”

Any way you slice it Barnett looks as much like a first-century Judean as did Jeffrey Hunter in King of Kings or Willem Dafoe in The Last Temptation of Christ or Max Von Sydow in George Stevens‘ The Greatest (and Most Absurdly Miscast) Story Ever Told.

38 Comments
Please Lock Me Away

And don’t allow the day. Here inside. Where I hide. With my loneliness.

This morning in a follow-up sentencing for related crimes, federal Washington Judge Amy Berman Jackson gave Manafort a 73-month sentence, part of which will run concurrently with the Ellis sentence. Boiled down, Manafort will do and 7 and 1/2 years behind bars. Ellis gave him nearly four years, and Jackson, who expressed strong condemnation and very little sympathy for Manafort in her sentencing statement, added 3 and 1/2 years.

Right after the Jackson sentencing Manhattan District Attorney Cyrus Vance Jr. announced an indictment of Manafort on charges “related to mortgage fraud and falsifying business records in order to obtain millions of dollars.” The idea is to ensure that gout foot will still face prison time if President Trump pardons him for his federal crimes.

“Please let my wife and I be together,” Manafort begged Jackson before sentencing. “Please do not take away any longer than the 47 months. If not for me, then for my family.”

In a Los Angeles Review of Books piece titled “Kompromat: Or, Revelations from the Unpublished Portions of Andrea Manafort’s Hacked Texts,” Maya Gurantz explores allegations by Manafort’s daughter that he arranged (i.e., paid) for his wife Kathleen to be gang-banged in a hotel room by black dudes, while Manafort watched.