There’s a line in the second, French-subtitled trailer for Long Shot in which Seth Rogen explains to a security guard that the pot he’s carrying is medically prescribed, and for alleviating anxiety. If there’s one thing I know about getting ripped (which I haven’t done since I accidentally ate the wrong kind of brownie 14 or 15 years ago), it’s how easy it is to slip into edginess or paranoia or even (God forbid) “the fear.” If I was a physician and a patient wanted something to contain anxiety, I would never advise medical marijuana. I would give them Percocet or Oxycontin or something in that realm.

Earlier today I asked author, filmmaker and Hollywood Reporter critic Todd McCarthy for a certain Apocalypse Now recollection, which he was a little fuzzy on. Then I asked about his long history with the Cannes Film Festival, and the following d just poured out. Magnificent I-was-there stuff.

“My first Cannes was actually 1970, when I was a student spending the year in Europe. I was a film critic for The Stanford Daily (Roger Corman recently told me that he reviewed films for the Daily when he was enrolled there after WWII, and he thinks his first review was of My Darling Clementine; mine was Belle de Jour). I knew I wouldn’t be able to get credentialed in Cannes from a school paper, so my pal Ralph Gleason at Rolling Stone offered to credential me even though he had no intention of publishing anything about Cannes — he didn’t give a shit about it. 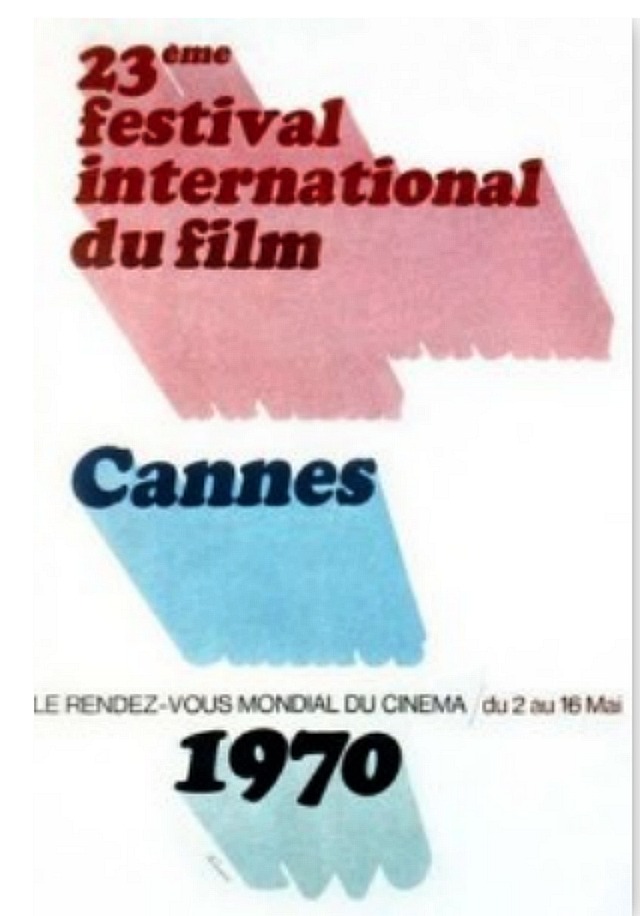 “I saw more than 40 films that year, met everyone (Otto Preminger, Arthur Penn, Joe Dallasandro, Candice Bergen, Helmet Berger, Romy Schneider, Robert Altman, plus a blind date with the then-unknown Margot Kidder). The American 6th Fleet was in the harbor so the back streets were jammed every night with sailors and hookers, and one’s alarm clock was always the U.S. jets on board the aircraft carrier firing up their engines around 6 a.m.

“Then Kent State happened, and Altman, Michael Wadleigh and Stuart Hagman organized for everyone to wear black armbands for a couple of days. It was all an amazing scene — no publicists restricting access, even the biggest names just strolling down the Croisette with no hassles.

“An amazing fact in retrospect is that, in those days, almost no American critics or journalists attended Cannes. Charles Champlin went occasionally, and in the 1970s Vincent Canby showed up two or three times. Richard Corliss and Roger Ebert started sometime in the early-to-mid ’70s.

“But in 1970, the New York Times just sent two Paris stringers, the married couple Richard and Cynthia Grenier, and the only Yank critics who actually crossed the pond to attend were Rex Reed and Kathleen Carroll. I had drinks or lunch with them a few times, and this was when Rex was at his preening peak, one month before the release of Myra Breckenridge. He was pretty hilarious company and Kathleen couldn’t have been nicer.

“But best of all was my evening with William Wyler. He had his last film, the misfired The Liberation of L.B. Jones, about to come out, but was just tooling around Europe with his brother Robert and decided to pop into Cannes for a couple of days.

“Early one evening I wandered through the Carlton Bar to see who was around and saw my buddy Albert Johnson of the San Francisco Film Festival, sitting with a couple of old gents. Albert waved me over and introduced me to the Wyler brothers. I could scarcely believe my great good fortune.

“After a couple of drinks Albert proposed dinner, so 20-year-old moi got to enjoy a four-hour repast with one of classical Hollywood’s greatest directors. (I’d actually already seen nearly all of his films and had written a 20-page paper about him for a film class). Although famously hard of hearing because of his final WWII bombing mission, Wyler was excellent company and amazingly self-deprecating. So that made my year.

Uncle Joe doing his usual shpiel on decency, unions, “this country,” regular middle-class guys, saying thanks to those who repair busted water mains at 2 am. Feeling the old fire. “I’ve been saying this for 45 years…some people are afraid to use the word…not me!”

Robin Bissell’s The Best of Enemies (STX, opening today) isn’t a dramatic knockout or any kind of game-changer, and yes, a contrarian could describe it as an old-fashioned, over-simplified racial rapproachment period drama that isn’t woke enough, to put it mildly, and probably shouldn’t have been made because it was doomed to piss off the wokesters from the get-go.

But given the basic material and what it tries to do, The Best of Enemies is relatively decent. Really, it is. Somebody tell LexG.

Last night I bought my damn ticket to a 7:30 Hollywood Arclight showing. I went in with a sulking, eye-rolling, fuck-me attitude, but damned if this unassuming film didn’t half win me over. It doesn’t blind you with cinematic genius or audacity, but it’s a lot better than I expected it to be, what with the 48% Rotten Tomatoes rating and the general reluctance of STX to screen it for people like me. Why distribute an indie-ish, character-driven film if the plan is to basically hide it from the press?

I was mostly won over because I was so completely knocked out by Sam Rockwell‘s C.P. Ellis, a real-life gas-station owner and Ku Klux Klan cyclops who managed to turn some kind of corner during a 1971 conflict over integrated schooling in his home town of Durham and experienced…I hate the word “awakening” but it was apparently something in that realm.

Rockwell is always good in a low-key way, but this time he’s calibrated things just so, letting us share in a subtle but gradual character arc that really takes hold at the end. In the right way, I mean. Very little is traditionally “performed” or even visually signalled. You either detect the internals or you don’t.

I know I’m not supposed to succumb to racial fables like this because they’re regarded as a little too pat and preachy, but I sorta kinda did. I wasn’t knocked out or levitating but I was going “hmmm, yeah…not bad.”

I’m also not supposed to like The Best of Enemies because wokester critics (the same hardline Stalinists who took shots at Green Book all through Oscar season) heartily disapprove. Those guys can really go fuck themselves. Nobody has to jump up and down and cheer The Best of Enemies, but to put it down because it isn’t saying what they want it to say or because it’s too old-school or not forward-thinking enough or it doesn’t condemn the Klan characters enough…God, I hate these people.

I’m sorry but Bissell’s script is decently written as far as it goes. And the direction is plain and unfettered and doesn’t get in the way. To me the film didn’t feel the least bit false or phony-baloney except during the final scene. Yes, the Field of Dreams-like gas-station scene with the long line of cars. For all I know this may have actually happened.

Several weeks ago Woody Allen filed a $68 million lawsuit against Amazon for failing to release A Rainy Day in New York.

It’s common knowledge that Amazon welshed on their distribution deal with Allen because they were terrified of angering the #MeToo community in the wake of Dylan Farrow‘s #MeToo reboot of her 1992 sexual-assault allegation.

Allen contended in his lawsuit that Dylan’s accusation is “baseless,” as the facts overwhelmingly indicate. Alas, Amazon execs didn’t care about the facts and history or the holes in Dylan’s account or Moses Farrow’s May 2018 essay or anything else.

Facts, logic and likelihood be damned. Amazon only knew that the #MeToo community wanted Allen dead, and that they’d never forgive Amazon if it went ahead and distributed Rainy Day regardless.

Two days ago Amazon filed a mind-boggling response to Allen’s lawsuit. Attorneys claimed that Allen’s public comments about the #MeToo movement, one of which expressed concern about a possible “witch hunt atmosphere,” made it “impractical” to release and promote A Rainy Day in New York.

Allen is hardly the only person to express concern about a Crucible-like atmosphere coming out of #MeToo allegations. Bill Maher and N.Y. Times columnist Bari Weiss have shared the same thought, but Amazon is nonetheless saying that because Allen didn’t weep and theatrically “confess” and throw himself upon the church steps and beg for mercy…because he stood his ground and repeated the verified facts and refused to abase himself before the #MeToo mob, they were justified in refusing to honor the deal.

Allen’s February lawsuit states that Amazon was “well aware of the allegations” against him when it signed him to the agreement and that these accusations are without the slightest factual merit. Again — Amazon bailed because a few actors who’d previously worked with Allen said that they wouldn’t go there again, including Greta Gerwig and Rainy Day star Timothee Chalamet.

** Wonder Wheel didn’t die because of the #MeToo climate. It died because it felt oddly labored and out of time. It was warmed-over Tennessee Williams with a delusional and unsympathetic lead character (Kate Winslet‘s Ginny) and because it ended on a note of tragic despair.

From my 10.13.17 review: “It’s basically a thrown-together stew of familiar Allen-esque elements and influences — a little Chekhov-Seagull action, a little re-frying of Blue Jasmine desperation mixed with A Streetcar Named Desire, a dash of Mary Beth Hurt‘s ‘Joey’ character in Interiors, some gangster seasoning from Bullets over Broadway plus some onions, garlic, celery and sauteed peppers and a little Crimes and Misdemeanors.”

As reported on 3.14, a technically upgraded version of Francis Coppola‘s Apocalypse Now — remastered in 4K with Dolby Vision and Dolby Atmos from a 4K scan of the original negative — will screen at the Tribeca Film Festival (actually the Beacon theatre) on 4.28.

If you go to the Tribeca Film Festival website and search under the A to Z rundown of films, the Apocalypse copy announces that Coppola’s Vietnam War-meets-Joseph Conrad-meets-LSD classic “will celebrate its 40th Anniversary at the festival with a screening of a new, never-before-seen restored version of the film, entitled Apocalypse Now: Final Cut.” 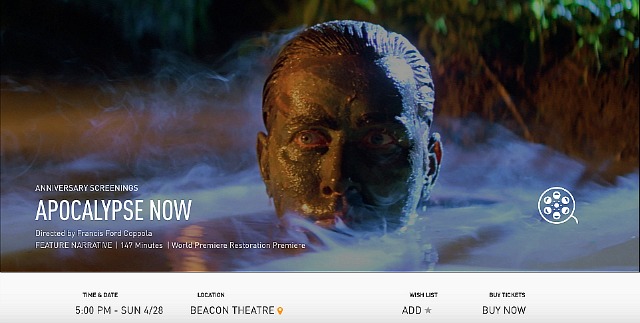 As I wrote in the afore-mentioned article called “Apocalypse Now: Spit Shined“, the Final Cut title was misleading.

Because, as I accurately reported, the new version contains “no new footage, and has nothing to do with re-editing or extra bells and whistles — it’s strictly a technical upgrade thing. Hollywood Elsewhere urges Coppola to remove the words ‘final cut’ and replace them with ‘spit-shined.’ Because that’s what this is.”

The impression created by the term “final cut” has lingered. An industry friend recently speculated that the Tribeca version might be a new cut that is somewhere between the 147-minute original version (the 153-minute running time was a result of closing credits that appeared on the 35mm wide release prints) and Apocalypse Now Redux, which ran 202 minutes.

This morning a Tribeca rep sent me another web page with different info. The words “Final Cut” have disappeared. The new term is “World Premiere Restoration Premiere.”

It also confirms that the version Tribeca is showing (147 minutes or 2 hour, 27 minutes) is the original 70mm version sans credits.

Just to recap, the 70mm Ziegfeld theatre version (no closing credits except for the words “Omni Zoetrope” at the very end) that premiered on 8.15.79 ran 147 minutes. The wide-release 35mm version with closing credits ran 153 minutes. Apocalypse Now Redux (’01) ran 202 minutes, or 49 minutes longer than the 35mm version w/ credits.