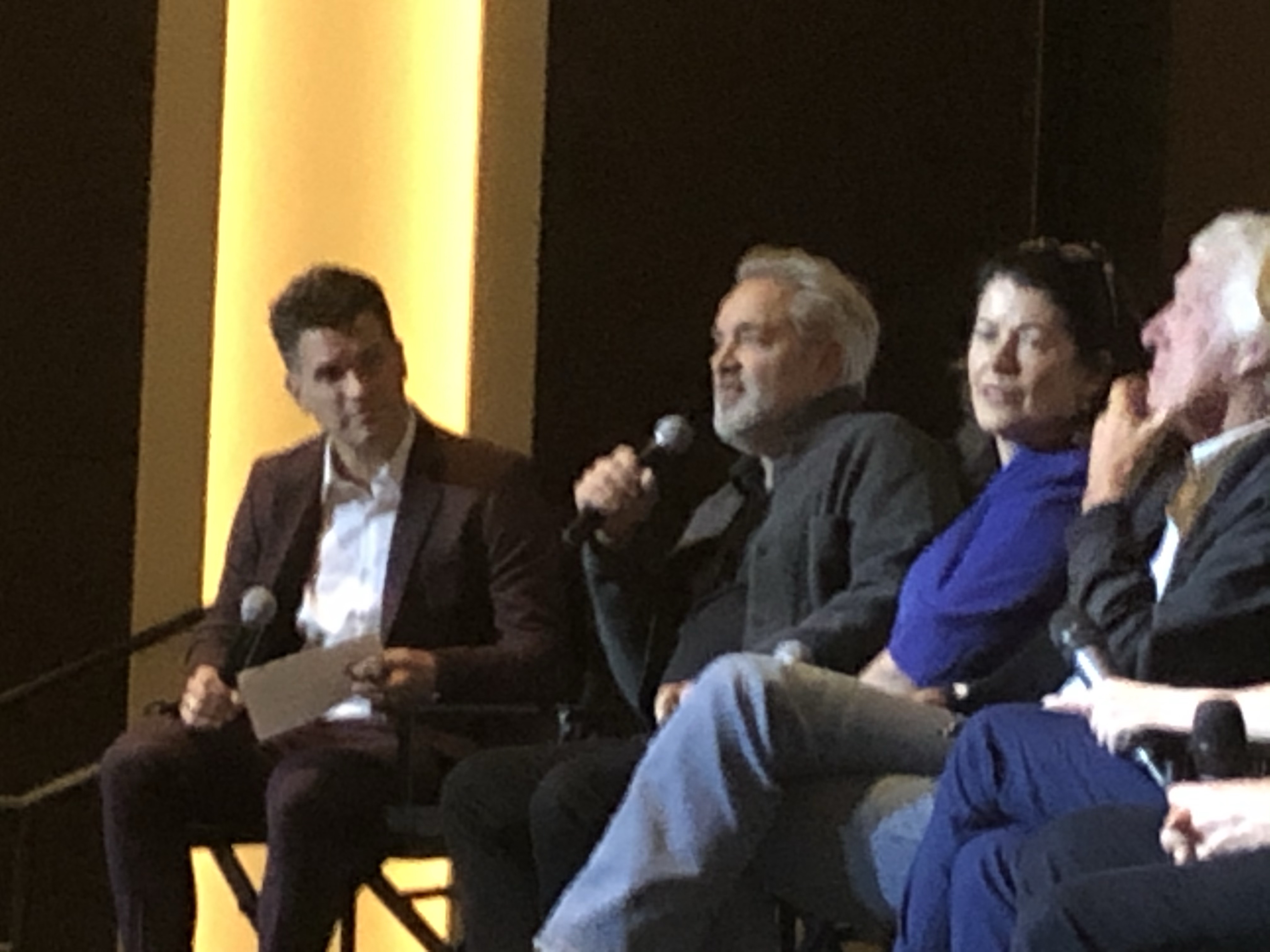 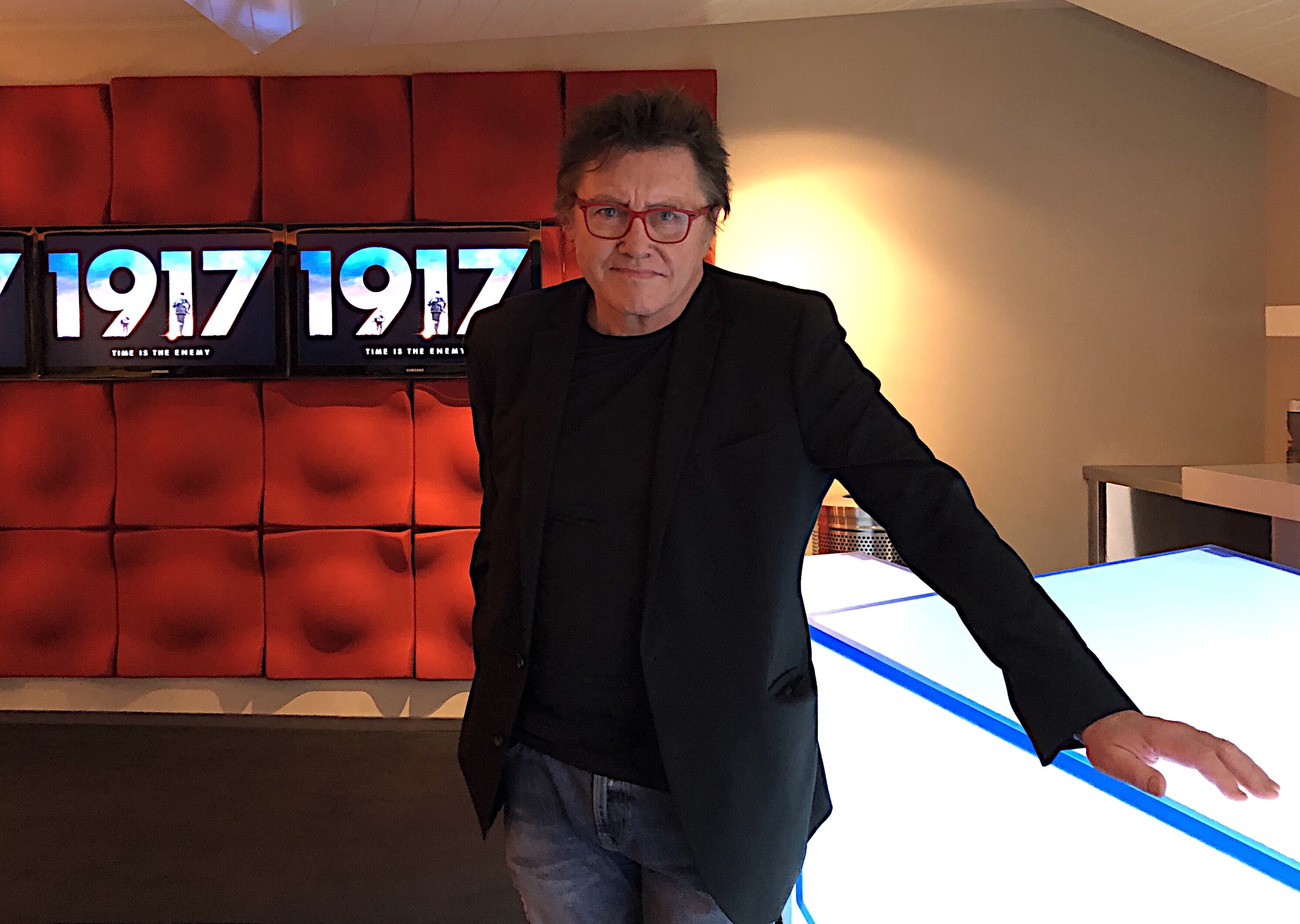 One of the coolest swag items — mementos — of the 2019/20 Oscar season…wooden, seemingly hand-crafted ruby slippers from LD Entertainment’s Judy. Presumably sent at the urging of Oscar strategist David Pollick, who has been with Garland-channeller Renee Zellweger from the get-go. Somebody worked very hard to create these. Real “ruby” sequins, etc. Now hanging from VW Beetle’s rearview mirror. 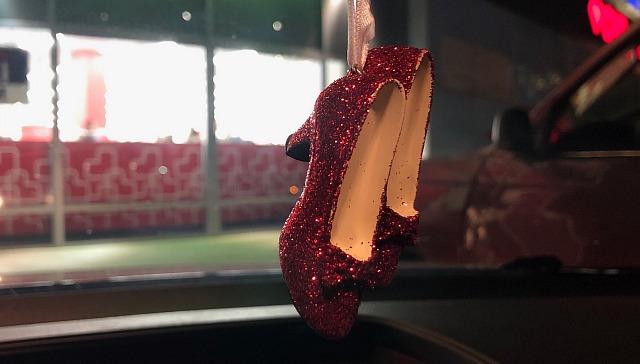 Sopranoscon (i.e., Comic-Con meets The Sopranos) is happening this weekend at the Meadowlands Exposition Center in Secaucus. (Or, as Joe Pesci‘s Tommy pronounced it in Goodfellas, “SEE-kawkus.”) “Sopranos Sessions” co-authors Matt Zoller Seitz and Alan Sepinwall were the Sunday stars.

Sidenote: Among all the classic Sopranos lines immortalized on the wall [pictured below], I don’t see “they don’t sell hot dogs here — they took the bleachers out two years ago.” 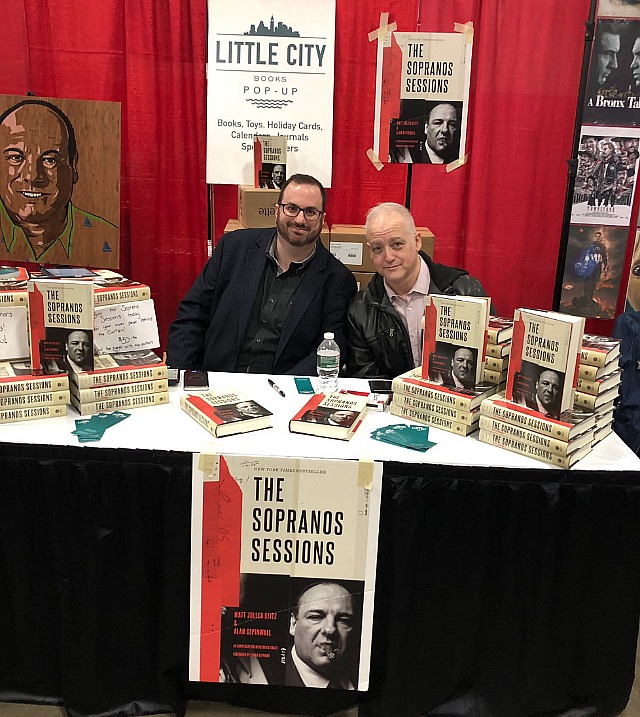 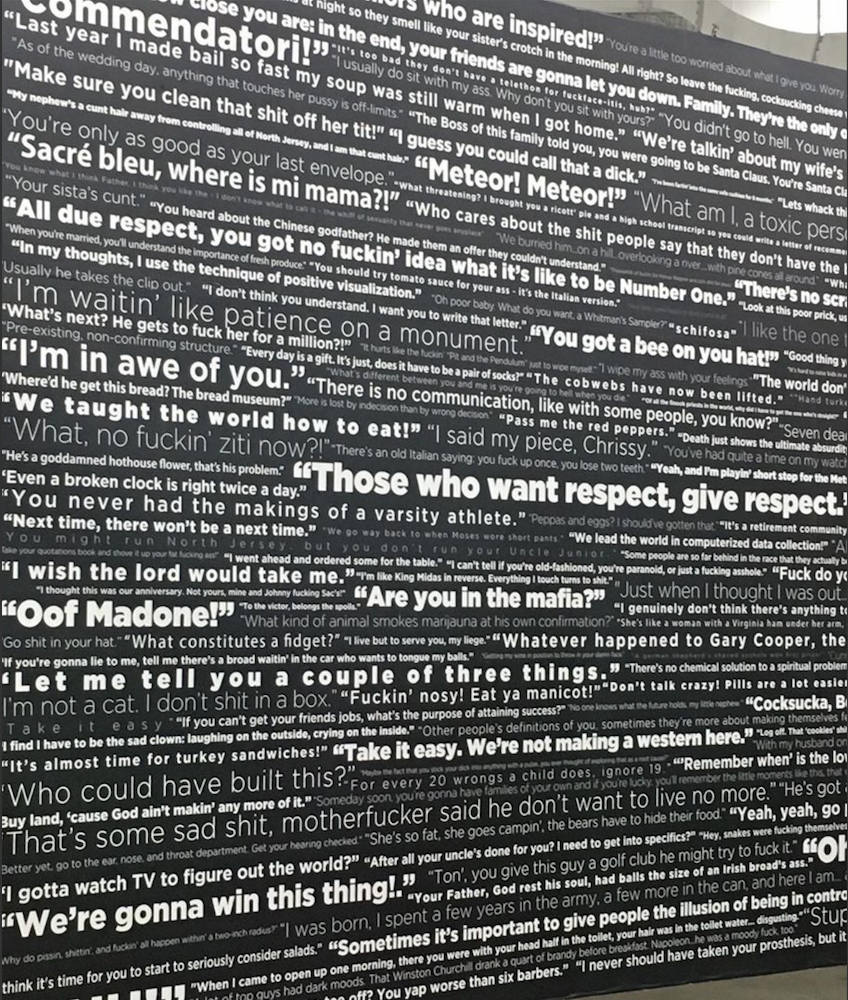 Mike Bloomberg has entered the Democratic presidential nomination because he sees an opening. The top four candidates have serious weaknesses. No major consensus candidate is riding the crest of the wave. Younger voters don’t relate to Droolin’ Joe, African Americans are refusing to support Pete Buttigieg, the far-left agendas of Elizabeth Warren and Bernie Sanders are scaring Midwestern battleground voters.

And so Bloomberg, who would certainly be a saner, restorative, more progressive president than Donald Trump and whom I’d vote for in a New York minute if he was the Trump-opposing candidate, is looking to buy his way in at this late date.

From “Peak billionaire: a billionaire tries to purchase a party nomination to outflank anti-billionaires so he can run against another billionaire,” posted by Boingboing’s Cory Doctorow on Sunday, 11.24.19 at 7:27 am:

“The plutocrats — Time‘s Anand Giridharadas calls them ‘plutes’ — spent 40 years telling us that anything that doesn’t embrace the above is ‘socialism,’ with the inevitable and totally foreseeable outcome that Americans now embrace socialism at rates not seen since the New Deal.

“As Giridharadas writes: “History is the story of conditions that long seem reasonable until they begin to seem ridiculous.”

“So now the plutes are panicking: the Business Roundtable is promising a new form of capitalism (but refusing to even consider kicking out or even censuring members who violate that promise). Michael Bloomberg is buying his way into the Democratic race because he’s worried that the frontrunners ‘aren’t plutophilic enough,’ leading to peak plute: ‘A billionaire deciding to possibly attempt to purchase a party nomination because of his fear that some candidates in the race aren’t plutophilic enough, and then running against a maybe–billionaire who promised that being a billionaire would make him specially incorruptible and now is in impeachment proceedings over his alleged corruption.”

I for one was seriously impressed with the Once Upon A Time in Hollywood clip of “Rick Dalton” playing Cpt. Virgil Hilts (the role Steve McQueen actually played) in The Great Escape. The implication is that Dalton (Leonardo DiCaprio) screen-tested for the Hilts role or perhaps had even been cast before director John Sturges changed his mind and gave the role to McQueen. McQueen’s voice was deeper than Dalton’s — he had the surly-insolence-mixed-with-confident-swagger thing down pat. The Great Escape clip wasn’t ready when OUATIH premiered in Cannes or, as far as I know, opened last summer. Thanks to Aurora for posting this a couple of days ago.

You can tell by the tone of the conversation that mouthy hoodie guy (white) and furious skull-cap, yellow-green parka guy (black) aren’t debating the merits of Melina Matsoukas‘ Queen & Slim or the obstinate, bordering-on-self-destructive refusal of African-American voters to give Pete Buttigieg a fair shake. I’m pretty sure hoodie guy is using the “n” word, and is therefore the asshole in this dispute. Yellow-green guy landed four or five punches before it was broken up. This doesn’t look like a New York MTA car — is it? If not, any guesses as to what city?

Ok, I kind of live for the ballsy white guy who jumps right in the middle and says “We’re on public transportation – get your SHIT together”