Support on Patreon Follow @wellshwood
5 Comments
Hurts To Hurt Someone

This is probably a minority opinion, but speaking as a guy who’s been dropped cold or given the casual brush-off by many fetching women during my hound-dog heyday (mid ’70s through late ’90s, not counting my four-year marriage from ’87 to ’91), it’s a bit more painful to dump than to get dumped.

Is it unfair to presume that the budding romance between John Boyega‘s Finn and Kelly Marie Tran‘s Rose Tico, which ignited in The Last Jedi, was squelched because old-school fanboys attacked Tran online for this and that, to such an extent that she quit Instagram? We all know that’s what happened, on top of which Rose has significantly fewer lines and screen time in The Rise of Skywalker so what else are we to think? I’m open to interpretations. 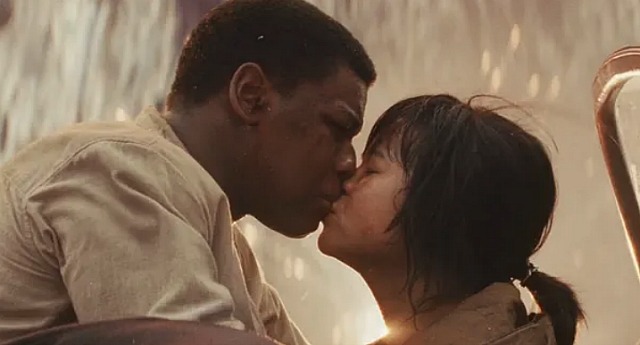 “A two-story establishment, smack dab in the heart of the diamond district…on the ground floor you could buy some jewelry, get your jewelry cleaned, buy the film’s official VINYL, and they even had some mini-furbies on display that’ll be sold online come January. There was an official Uncut Gems x A24 Magazine that was being given out that includes some interesting stories/images,” etc.

This is A24 for you — they’ll spend God knows how many thousands on a diamond district pop-up that will maybe catch the attention of some schmuck tourists, but they won’t spring for a Phase One HE advertorial or straight ad buy for a lousy $5K or $8K. 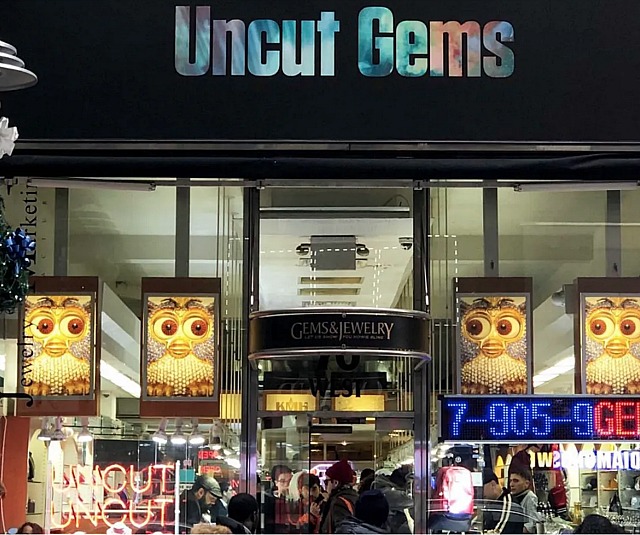 Director Tom Hooper hadn’t fully finished Cats when it was time to duplicate prints, so he completed the job a few days later. And now Universal is sending out DCPs and satellite feeds of the corrected version (i.e., one in which Judi Dench has cat paws instead of human hands) to theatres.

“An unheard-of move for a finished film already in release,” THR‘s Pamela McClintock derisively snorted. But if you were in Hooper’s shoes wouldn’t you do the same?

I stayed awake throughout last week’s all-media screening of Cats, and I didn’t notice Dench’s naked hand, much less her wedding ring. Or maybe I noticed it and shrugged it off. (HE in 12th row at Chinese plex: “Dench has a human hand…aahh, whatevs.”)

Many films haven’t really been finished (at least in the minds of their directors) until after their commercial opening. Steven Spielberg‘s Close Encounters of the Third Kind, Oliver Stone‘s Alexander, etc. 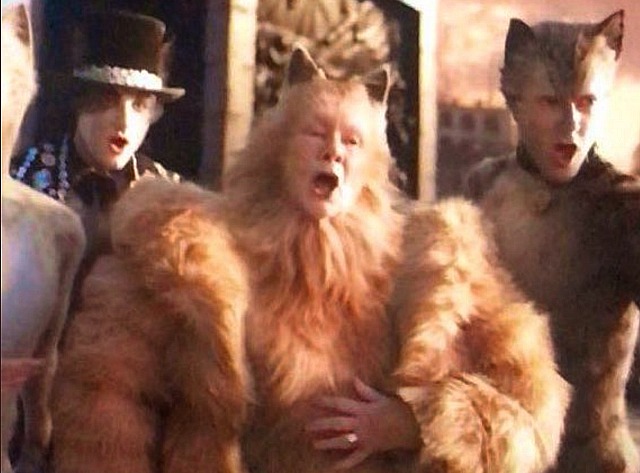 The Christmas downshift began two days ago, and won’t end until Thursday, January 3rd, or 12 days from now. The twitter conversation is certainly slowing to a crawl. I wish I was in Manhattan now because at least I’d have that rumbling energy to draw upon. I always love roaming around in the days before Christmas, particularly in the stores and during walks around town in the late afternoon and especially at night. But the post-Christmas doldrums, a seven-day period that will begin on Thursday, 12.26, and end seven days later are hell. Okay, not “hell” but it always feels glorious when they’re over. The one thing that made me smile yesterday? The below black-and-white N.Y. Times pic of an angry Donald Trump. 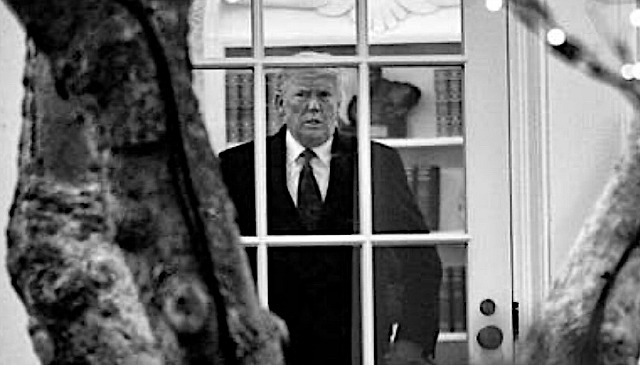 I’m trying to recall my first viewing of A New Hope, back when it was called Star Wars and nobody knew any better. I was a Westport, Connecticut lad at the time, and I’m fairly sure I attended a Manhattan showing right after the opening on 5.25.77, probably at Loew’s Astor Plaza.

Seeing a film like Star Wars in some dinky Fairfield County venue was unthinkable. Only the finest big-city venues had truly tip-top projection and sound back then. Dolby stereo sound had only been introduced a couple of years previously, the first-out-of-the-gate test case being Robert Altman‘s Nashville.

You can immediately feel the grip and the pull from these clips. There’s something vital going on, and the great Alec Guinness lent a veneer of class. I liked Star Wars but within its genre arena; in my eyes it wasn’t its own thing but a winking homage to Flash Gordon-style space adventures.

Two or three weeks later I saw William Friedkin‘s Sorcerer, and immediately told my friends “this is it…easily the best film of the year!” Maybe it was, but the infantilization of mainstream cinema had taken hold, and films like Sorcerer no longer had the mojo. Little did I know at the time…

11 Comments
Before Driver’s “Being Alive”

The look of contempt that Poe Dameron gives Kylo Ren at the 33-second mark is perfect. His eyes say three things: (1) “Is this cowboy-hatted dude…whatever he thinks he’s doing is lame”; (2) “Did he used to sing with the Jordinaires?”; (3) “And he’s recording with us?” I laughed at Oscar Isaac‘s disdain when I first saw Inside Llewyn Davis six and a half years ago, and I bought it all over again when I re-watched it last night. A 100% genuine moment, one human being to another. I’m sorry but it sank in more deeply than any single moment in The Rise of Skywalker. Plus the instrumentation sounds extra-great with headphones, especially with the stand-up bass.

Nine films were nominated for 2013 Best Picture Oscar, and Inside Llewyn Davis wasn’t one of them? Seriously? The Best Picture winner, 12 Years A Slave, is a masterpiece, but who re-watches the other eight nominees and to what extent?

I will never, ever watch Gravity again. (Sandra Bullock going “aagghh!” in a haunted house, and space is the ghost.) Nor will I ever watch David O. Russell‘s American Hustle again. (But I’ll watch Silver Linings Playbook any day of the week and twice on Sundays.) Captain Phillips was over-rated. Dallas Buyers Club is a good film — I’d watch it again. Spike Jonze‘s Her is also special, but I haven’t re-viewed. The best thing about Alexander Payne‘s Nebraska was that song, “Their Pie.” Dernsy screwed himself out of an Oscar by insisting that his grouchy old cuss was a Best Actor thang. Inside Llewyn Davis should have been nominated instead of Philomena. Martin Scorsese‘s The Wolf of Wall Street is the 2013 Best Picture nominee that people will be re-watching 50 years hence.

Eddie Murphy‘s young, lithe and slender “Mr. Robinson” was hilarious in the early ’80s. But last night’s rebooted version? It’s funny when a 20something wise-ass skips on the rent but less so when an older, paunchy guy does the same thing. Not to mention stealing 72-inch flatscreens from his white-ass neighbors. The “toasting our loving family at Christmas” skit was the best. Buckwheat was funny; Gumby was noteworthy for the following ad-lib: “I’m the one that made that Eddie Murphy a star. He was just a regular coon boy until I saw him.”

Second complaint: The amiable Colin Jost, 37, is a valued SNL comedy writer in addition to his “Weekend Update” anchorship. He’s also moderately good looking, is engaged to Scarlett Johansson, and bunked with Pete Buttigieg at Harvard. But he’s the blandest SNL news reader ever. A confident “Weekend Update” personality just says it — clever is clever whether it gets a huge laugh or not. But Jost always seems to wait for audience approval, and then glows with contentment when he gets it. Plus his undercut (aka “Hitler youth”) is unflattering. Some of Jost’s forebears had the requisite impudence — Chevy Chase, Dan Aykroyd, Jane Curtin, Bill Murray, Norm Macdonald, Seth Myers, etc. Yes, I know — Uproxx’s Steven Hyden posted a riff along these lines last April (“Why Does Everyone (Still) Hate SNL’s Colin Jost?“).