Judd Apatow and Pete Davidson‘s The King of Staten Island will begin streaming on Friday, 6.12. The embargo finally lifts on Monday, 6.8.

A good film is a good film under any viewing circumstance, but as someone who’s streamed KOSI twice I would pay any fair price to be allowed to watch it with a theatre full of appropriately spaced all-media types and/or early adopters. Just to “feel the room”. I’m very sorry that’s not in the cards.

I booted his sorry ass last night, and let me tell you it feels really good to have done that. This site is now a tad cleaner and prouder and less cluttered with the musings of prickly asshats.

The final two episodes of Ben Mankiewicz‘s “The Plot Thickens” podcast about the life and career of Peter Bogdanovich (#6 and #7) are extremely sad and deeply moving. An account of a truly terrible tragedy and a calamitous fall from grace.

I was especially touched by Bogdanovich’s singing of a Sinatra song (“I’ll Be Seeing You“) at the end of episode #7.

It makes you want to re-read Andrew Goldman‘s q & a session with Bogdanovich (Vulture, 3.4.19). Posted on 3.6.19: “It’s the kind of interview that almost never happens — the kind in which the interview subject says exactly what he thinks. Exactly as in ‘fuck it, I don’t care.'”

The idea of never deploying regular military troops to deal with domestic disturbances goes all the way back to ancient Rome, or at least back to Laurence Olivier‘s thoughts about same in Stanley Kubrick and Kirk Douglas‘s Spartacus (’60).

Olivier’s Marcus Licinius Crassus to John Dall‘s Glabrus: “Have you forgotten Rome’s most sacred law, that a general may never bring his troops within the city walls?” Dall: “Sulla did.” Olivier: “Sulla? To the infamy of his name! To the utter damnation of his line!”

My first thought was that this new Da 5 Bloods poster is an attempt to link Spike Lee’s new film to the George Floyd uprising, et. al. Yes, many if not most African-American Vietnam combat soldiers probably came to a similar conclusion between the mid ’60s and early ’70s, thinking perhaps of the words of Muhammud Ali (“I ain’t got no quarrel with them Vietcong“). And this would fit right in, of course, with the story of four 60something vets returning to Vietnam and reconsidering their shared history. If I’m mistaken I apologize, but I don’t recall reading or hearing that “this ain’t our fight!” is a major theme of this soon-to-stream film until today. Da 5 Bloods will be on Netflix starting June 12th. 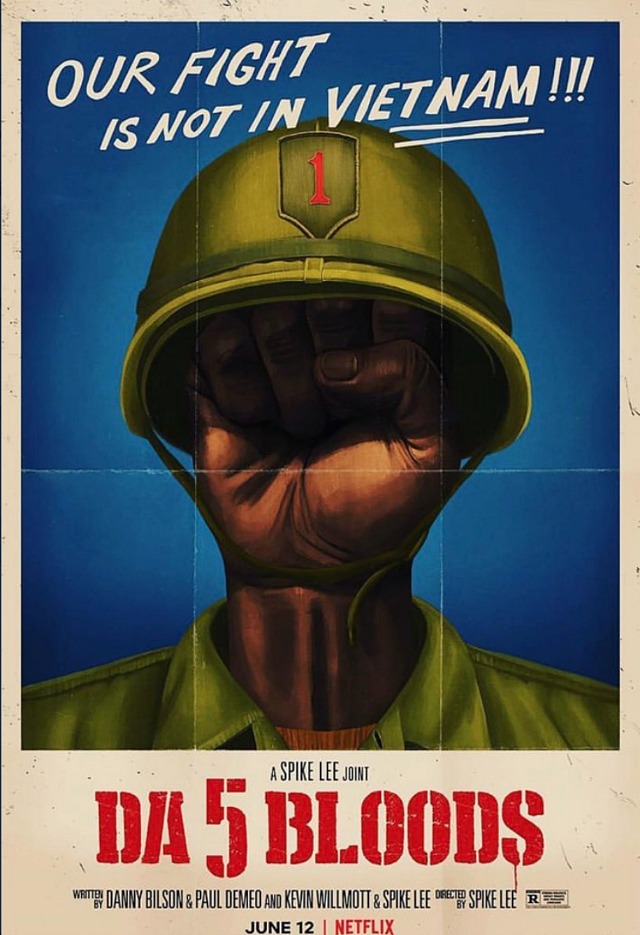 More fencing going up around the White House complex early this morning pic.twitter.com/VLBRnx1lgz

I recently fell in love with an HE-thread comment about “lily-white anarchist cosplay riotbros**,” but now I can’t find the source. Either way this two-day-old CBS News story about a white Chicago guy, Timothy O’Donnell, having been popped for setting fire to a Chicago Police SUV in the Loop district last weekend fits the profile perfectly.

Because O’Donnell was wearing a Joker mask while igniting the vehicle, and was photographed in the act. A telltale neck tattoo (“PRETTY”) led to his arrest.

It would appear, in short, that O’Donnell was inspired as much by Heath Ledger and Joaquin Phoenix as the murder of George Floyd and the nationwide protests that followed, if not more so. The basic anarchist impulse was fueled, of course, by nearly three months of quarantined isolation. Without covid would street insurrections still be happening as we speak? Doubtful.

Poor Chicago…just starting to reemerge from quarantine a couple of weeks ago, only to be trashed and plywood-shuttered by the protests and especially by the looters. Same goes for Los Angeles, New York…all over, right? 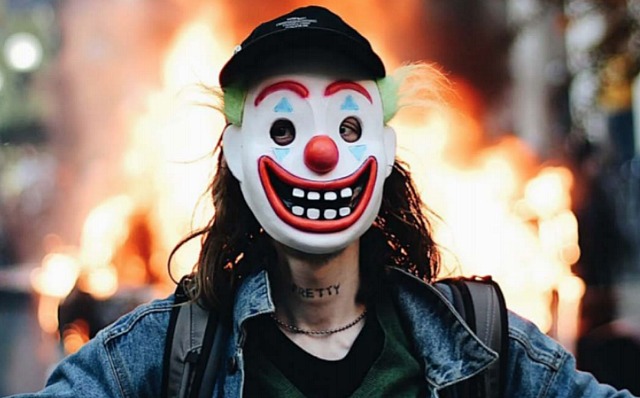 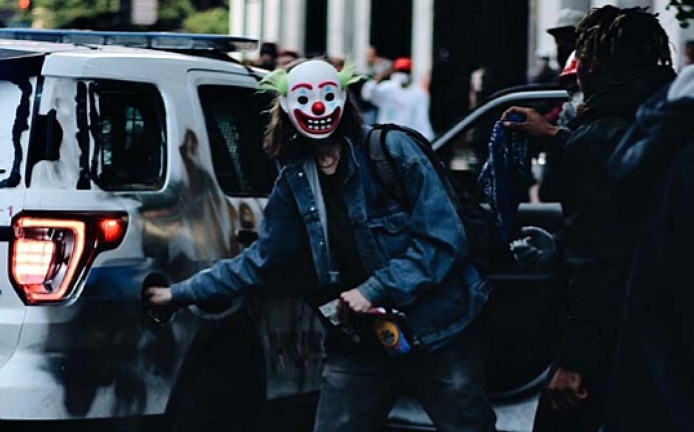 ** “Riotbros” being from the same temperamental family previously identified as “virusbros” and “Berniebros.”