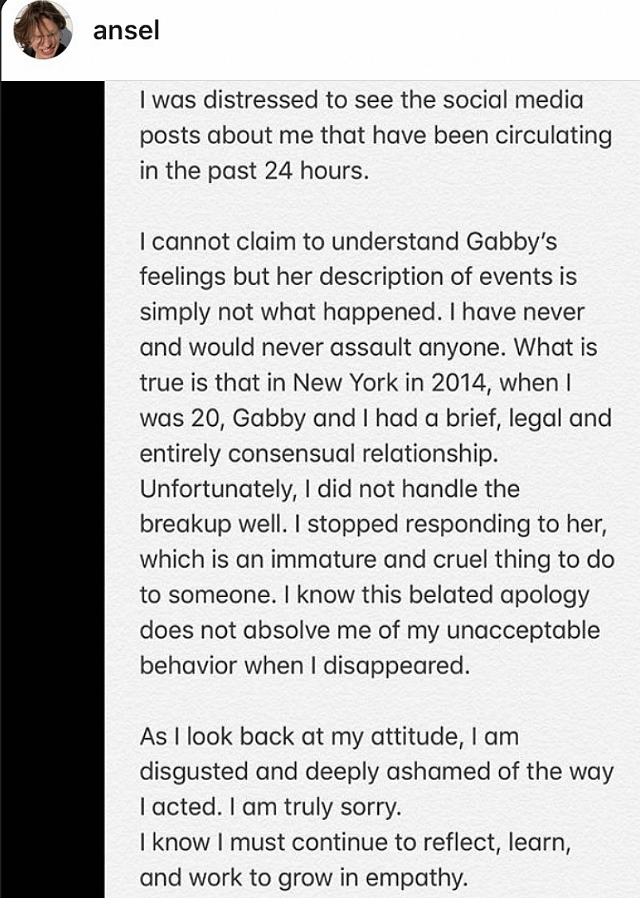 The crowd at Donald Trump‘s big Tulsa rally seems a little light. Is it fair to say “sparse”? Plenty of roaming-around room on the main floor. Acres of empty seats in the upper decks. [Filed at 4:34 pm Pacific.] 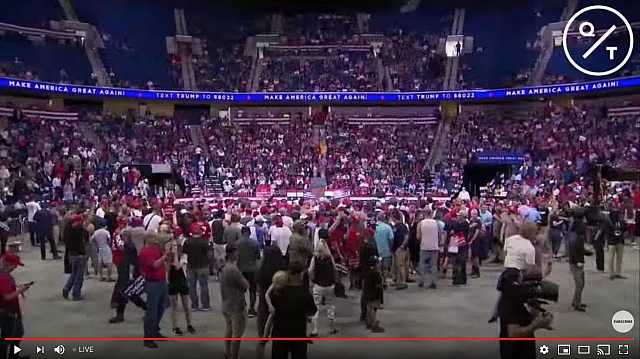 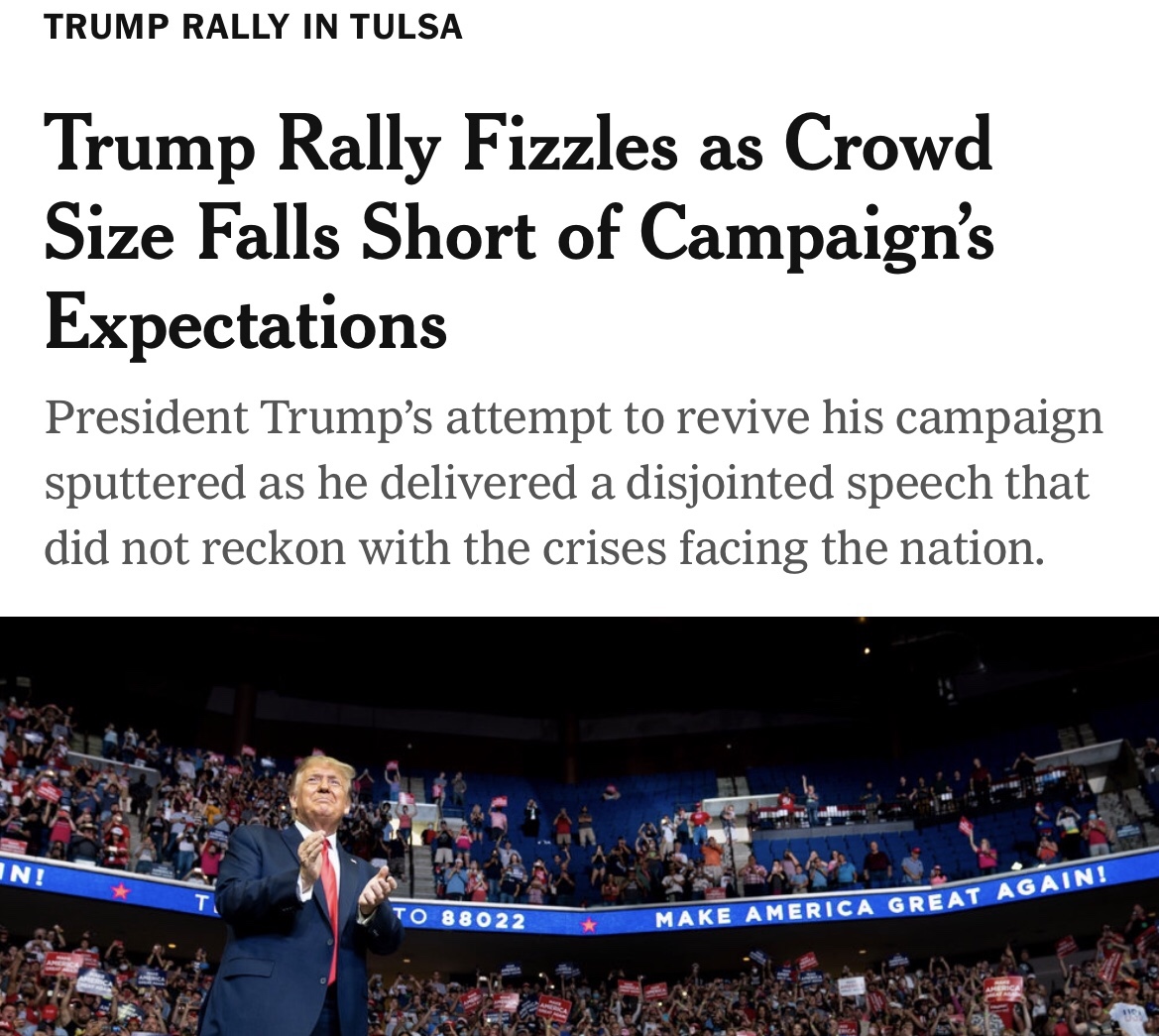 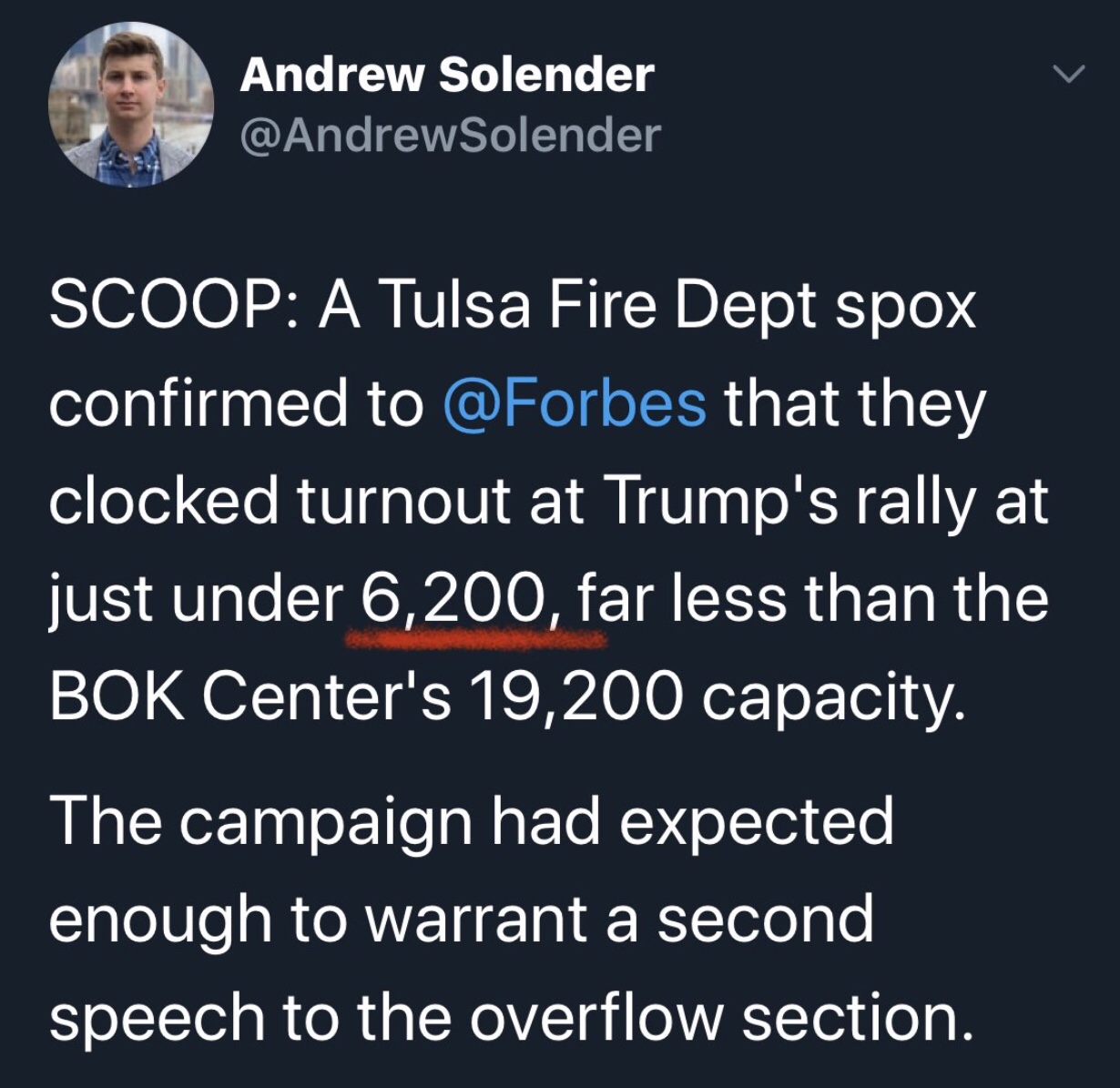 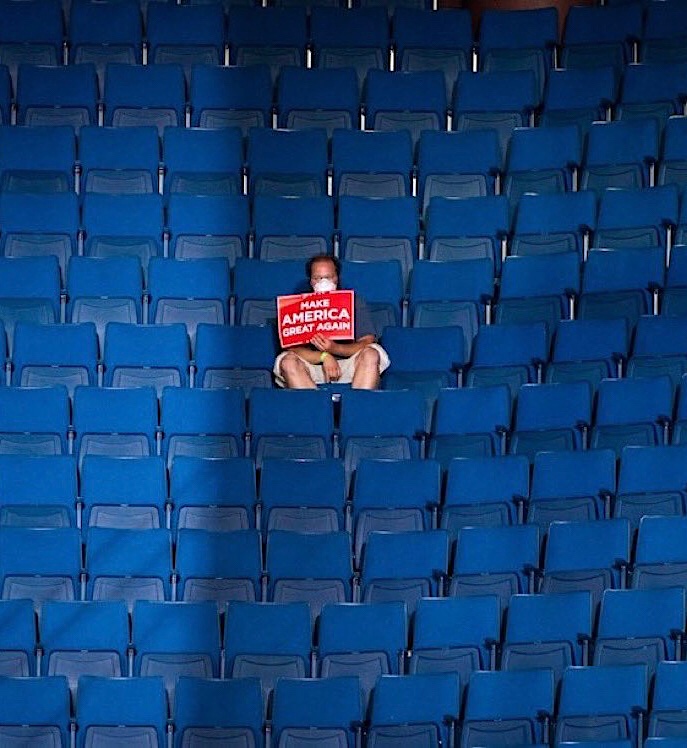 Sasha Stone, Jordan Ruimy and David Poland were roughed up on Twitter yesterday, but Sasha got the worst of it. And for no rational reason. Let’s backtrack and review what actually happened.

According to an account posted yesterday morning by a 23 year-old New York woman named “Gabby”, she had sex six years ago with West Side Story star Ansel Elgort. It happened sometime during the month of December 2014, just after her 17th birthday. As the liason apparently happened in New York State, where the age of consent is 17, there was nothing illegal about it.

There was, however, something distinctly unpleasant and painful about it, according to “Gabby”. It was, she says, her first time. And six years after the fact, she’s incensed that Elgort wasn’t gentler with her, and that he failed to stop despite her anguish.

Her account, to be clear, doesn’t say that she pleaded with him to stop — it notes that he failed to note her physical discomfort and stop of his own accord. Awkward and unfortunate as the encounter may well have been, it seems to resemble the Aziz Ansari sexual misconduct episode — bad or insensitive sex followed by anger and resentment on the woman’s part.

An immediate reaction among some Twitter fanatics yesterday was that Elgort had shown himself to be a pedophile, which of course he hadn’t as the encounter (New York State law is very clear about this) was legal, not to mention the fact that he and “Gabby” were separated in age by only three and a half years.

Others amended this accusation and called Elgort an “ephebophile” — i.e., guilty of ephebophilia, which is defined as an adult (which Elgort technically wasn’t at the time, being 20 years old) who has a sexual interest “in mid-to-late adolescents, generally ages 15 to 19.”

Okay but as I pointed out, the 20 year-old Paul McCartney did the same thing 57 years ago when he become romantically involved with the 17-year-old Celia Mortimer. At the time the age of consent in England was also 17.

Yesterday morning Awards Daily‘s Sasha Stone tweeted that the Elgort-Gabby thing was not a case of pedophilia. (She didn’t mention ephebophilia.) Stone was and is 100% correct, but for the unforgivable crime of passing along an incontestable fact, she was savagely attacked all day long by a gathering of ignorant excitables (which, if you wanted to be mean about it, could also described as a pack of rabid, snarling, salivating Twitter dogs).

David Poland and World of Reel‘s Jordan Ruimy, both of whom had questioned the hysteria triggered by “Gabby’s” statement, were also kicked, beaten and spat upon by wokester Twitterati.

Here’s a sampling of some of the Sasha-hating tweets that were posted yesterday: 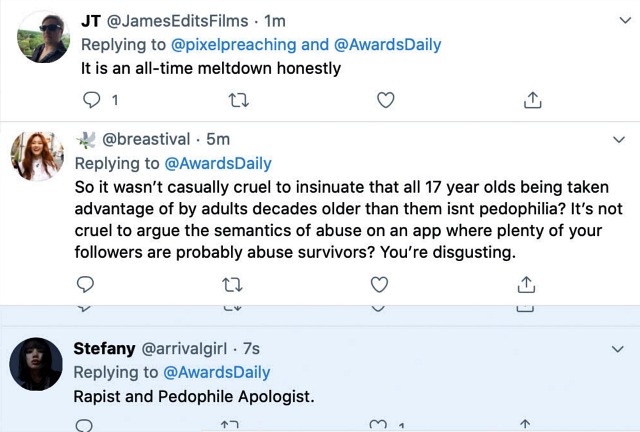 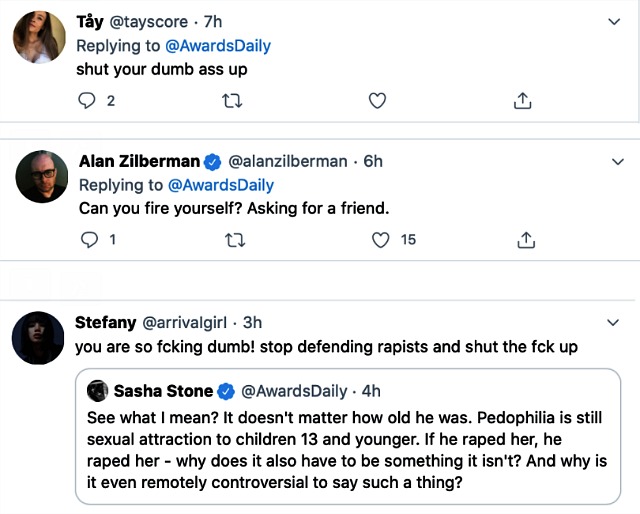 Here’s Sasha’s own account of what happened — the piece is titled “Mass Hysteria, Twitter and the Fate of West Side Story.”

This morning [Saturday, 6.20] Captain Chaos fired the United States Attorney in Manhattan, Geoffrey S. Berman, for being overly aggressive in pursuing Trump-related corruptions and cronies, and out of concern that Berman will be gunning for Trump personally after he leaves office on 1.20.21.

I was under the impression that Trump couldn’t fire Berman since his 2018 appointment was made official by judges of the United States District Court. I thought only said judges could dismiss him. Then again “a 1979 Justice Department memo holds…that the president [can] fire a prosecutor in Mr. Berman’s position,” according to a 1.20 N.Y. Times story about the matter.

Times story: “In a letter released by the Justice Department, Attorney General William P. Barr accused of Berman of choosing ‘public spectacle over public service’ because he would not voluntarily step down from the position.

“”Because you have declared that you have no intention of resigning, I have asked the President to remove you as of today, and he has done so,’ the letter read.

Times: “The dismissal of Berman came after his office brought a series of highly sensitive cases that worried and angered Mr. Trump and others in his inner circle,” blah blah. We all know what’s going on. 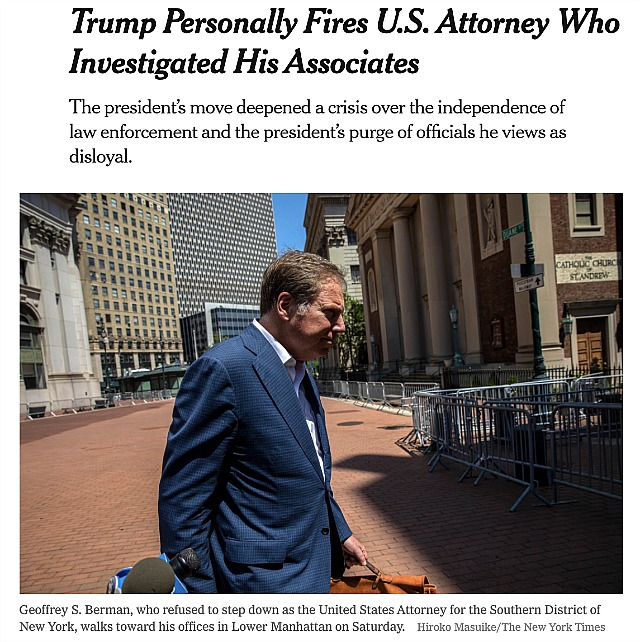 From Chris Willman‘s 6.16 Variety review of Bob Dylan‘s “Rough and Rowdy Ways”: “As a conspiracy-minded trip through every stray detail of the JFK assassination, but also a lyrical pastiche of references to half the pop culture and hep culture of the past six decades, ‘Murder Most Foul’ is the reason a website like Genius was invented, to have clickable explications of every phrase and the multiple allusions that can be packed into one deceptively mundane line.

“In one musical work, Dylan distills a vast and lifelong sense of exploration, as somebody who’s discovering not just the links between Kennedy and his assassins but between King James and Etta James, Beethoven and Warren Zevon, and finally, in the last line, his two favorite sources, Shakespeare and the Gospel. By the end, you can almost imagine Dylan coming into focus after all, against all odds: as our greatest dot-connector.”

Speaking as an all-but-bulletproof mask-wearer and frequent hand washer, I don’t feel good about quoting a conservative columnist who spoke hatefully about gay people back in the ’90s. But this passage moved me:

“All this unquantifiable speculative social intervention [is being done] in the name of that small proportion of people who are known to be, in truth, the only ones in real danger from the virus.

“So as someone who just about counts, because of my age, as one of those being protected by everybody else’s sacrifices, I assume the moral right to say this: please don’t. Don’t give up the freedoms and the opportunities that are proper to your stage of life for my sake, and do not go meekly into imprisonment to which the government has sentenced you.” — conservative Telegraph columnist Janet Daley.

Friendo: “If Los Angeles and NY further spike with the virus, Tenet will move to October to take WW84’s place, and that will move into next year, probably March. Mulan may end up going to Disney Plus. I heard this from a friend who’s with a big theater chain. It’s what he’s been told.” 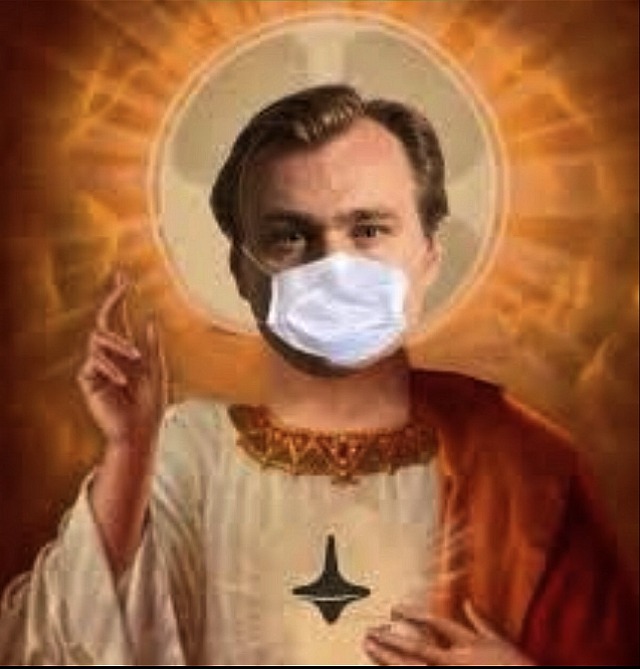