Support on Patreon Follow @wellshwood
46 Comments
When Caan Was King 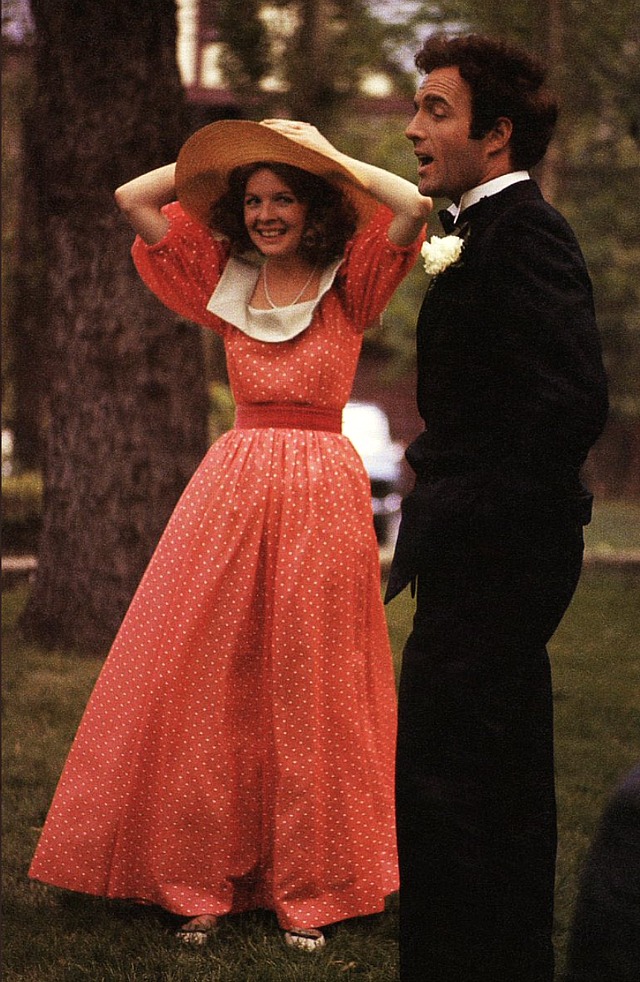 I’ll tell you what it means. It means that the April 2021 Oscar telecast is not going to be some kind of downmarket, dumbbell, Vegas-friendly, Alan Carr-ish thing. It’s going to be smart, sleek, Soderberghian, sophisticated, economical, tailored to X-factor sensibilities, forward-looking, less-is-more-ish. It means that sorta kinda clueless Hollywood Blvd. tourists will not be invited into the Dolby auditorium because nobody wants to watch a bunch of jerks shooting the proceedings with their smartphones. It means that…I don’t actually know anything but with Soderbergh calling (some of) the shots, you know it’ll be some kind of Mr. Smartypants thang. 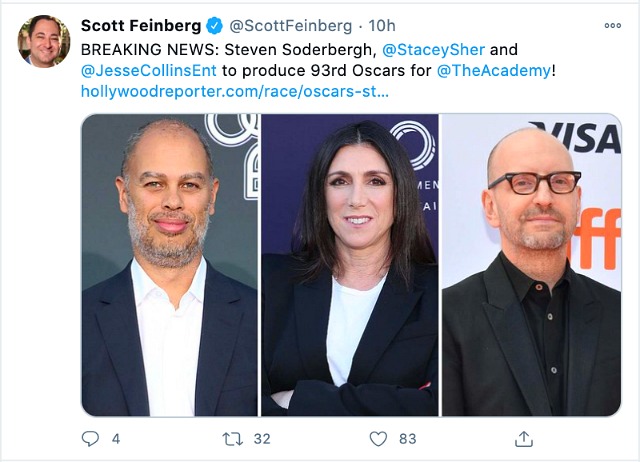 Prime example #1: Marlon Brando delivering Marc Antony‘s “friends, Romans, countrymen” speech in Joseph L. Mankiewicz‘s Julius Caesar (’53). At 2:08 Antony, overcome with emotion, says “bear with me” to the crowd, and then “my heart is in the coffin there with Caesar, and I must puh…pause ’till it comes back to me.” Brando stuttering on “pause” is deliberate, of course, but it sounds and feels right.

Prime example #2: James Caan‘s Sonny beating up Gianni Russo‘s Carlo in The Godfather (’72). At 2:52, after kicking Carlo a few times in the ribs, Sonny says, “If you touch (beat, catching his breath) my sister again, I’ll kill ya.” I’m presuming this wasn’t planned…Caan was tired from the exertion and just ran out of wind, and director Francis Coppola liked the realism.

From The Hill: New York Attorney General Letitia James predicted today on The View that President Trump will probably resign from office and then have Vice President Pence preemptively pardon him.

“He can preemptively pardon individuals, and the vast majority of legal scholars have indicated that he cannot pardon himself,” James said. “I suspect at some point in time, he will step down and allow the Vice President to pardon him,” she added.

YouTubers say (a) “I really think Trump’s gonna regret running for president…he ran to promote a failing brand, won by surprise, and thereby opened himself up to scrutiny where all his dirty deeds would be found”; (b) “Michael Cohen went to prison. No way Individual #1 won’t also do time. Seeing Trump in an orange jumpsuit and leg cuffs will be so damn satisfying”; (c) “Uh huh, here is why he’s afraid. Stick around, more after the commercials. Any of us can try to hide behind a thicket of lies, but the truth is always lurking about. And it never goes away”; (d) “MAAAN! She is not messing around!”; (e) “That lady is good…’Get him, girl!…get the whole stealing, lying, and inhuman numbs taking up space in this administration; (f) “I for one would not want Letitia James hot on my trail. She looks dangerous. Trump, your day is comin’.”

1. Steve McQueen‘s Mangrove — despite Amazon aiming it at the Emmys, it’s the best dramatic feature of 2020.
2. (tied for 2nd place) Chloe Zhao‘s Nomadland and David Fincher‘s Mank.
3. Roman Polanski‘s J’Accuse (An Officer and a Spy) — Ignoring this brilliant film is cowardly and shameful on the part of distributors and everyone else who has looked away in fear.
4. Florian Zeller‘s The Father
5. Aaron Sorkin‘s The Trial of the Chicago 7
6. Emerald Fennell‘s Promising Young Woman
7. Rod Lurie‘s The Outpost
8. Judd Apatow‘s The King of Staten Island
9. Lee Isaac Chung‘s Minari
10. Ryan Murphy‘s The Prom — Not a fan of the first 50 to 60 minutes, but I love how it ends. Made me choke up, in fact.

Wolfe’s book was an absorbing, insightful take on the Mercury Space Program, a governmental patriotism initiative that promoted personalities and heroism to sell itself to the public. Wolfe passed along the technical intrigues of the early flights and especially the seminal Chuck Yeager lore and how that cockpit attitude influenced every pilot who ever lived. The film, sadly, was a popcorn denigration — an attempt to make populist puree out of almost everything fascinating that Wolfe had reported and made humorous.

[From BennettInk, posted in January 2017] In a letter to his editor about “The Right Stuff”, which he was in the midst of writing, Wolfe explained that it’s not really a book about the space program. It turns out that it’s not even, really, about flying. It’s about the importance of status to men, and what happens when the rules of any status game change.

There had been a status structure to the life of U.S. fighter jocks before the space program, and it was clear to everyone involved. At the top of the pyramid were combat pilots, and at the tippy top were the combat pilots who found their way to Edwards Air Force Base, in the California desert, to test new fighter planes. The courage and spirit required not just to get to Edwards but to survive the test flights. The pilots themselves never spoke of [them], but they were at the center of their existence.

That unspoken quality was what Wolfe called the right stuff, and the embodiment of the right stuff — everyone knows it and yet no one says it — is Chuck Yeager. Hardly anyone outside the small world of combat pilots has ever heard of him. Here is how Wolfe, in a single sentence [HE — but which I’ve broken up into paragraphs], changed that:

“Anyone who travels very much on airlines in the United States soon gets to know the voice of the airline pilot…coming over the intercom…with a particular drawl, a particular folksiness, a particular down-home calmness that is so exaggerated it begins to parody itself (nevertheless!— it’s reassuring)…the voice that tells you, as the airliner is caught in thunderheads and goes bolting up and down a thousand feet at a single gulp, to check your seat belts because ‘it might get a little choppy’.

“Perhaps more fundamentally [it’s a] voice that tells you (on a flight from Phoenix preparing for its final approach into Kennedy Airport, New York, just after dawn): ‘Now, folks, uh…this is the captain
…ummmm…We’ve got a little ol’ red light up here on the control panel that’s tryin’ to tell us that the landin gears’re not…uh…lockin’ into position when we lower ‘em…now, I don’t believe that little ol’ red light knows what it’s talkin about….I believe it’s that little ol’ red light that iddn’ workin’ right’ — faint chuckle, long pause, as if to say, I’m not even sure all this is really worth going into — still, it may amuse you — ‘But I guess to play it by the rules, we oughta humor that little ol’ light…so we’re gonna take her down to about, oh, two or three hundred feet over the runway at Kennedy, and the folks down there on the ground are gonna see if they caint give us a visual inspection of those ol’ landin’ gears’ — with which he is obviously onintimate ol’-buddy terms, as with every other working part of this mighty ship—’ and if I’m right, they’re gonna tell us everything is copacetic all the way aroun’ an’ we’ll jes take her on in’.

Posted this morning by David Handelman (aka wittiebanter): “Forty years ago today, John Lennon was killed. The next morning, 19-year-old college-sophomore me had a radio show to do. All the other Boston stations were playing ‘Give Peace a Chance’, ‘All You Need is Love’ and ‘Imagine.’ I felt darker than that. I played ‘Happiness is a Warm Gun’, ‘Run for Your Life’ and ‘Help!’

“Forty years later, I see Above Us Only Sky on Netflix, the Yoko-driven documentary about the making of the Imagine record at an English country house in the summer of 1971. The proceedings are shaggy and fun, George Harrison dropping by, Phil Spector at the helm, and then suddenly this unkempt, clearly troubled Vietnam Vet named Claudio shows up and insists on meeting Lennon because he believes Lennon wrote all his songs for Claudio.

HE interjection: Claudio and Mark David Chapman were more or less the same unhinged loon.

“The John-Claudio encounter is on film, and Lennon patiently hears Claudio out and tries to reason with him — ‘How could I know you?’ — and that he, like Bob Dylan, just writes things hoping people will relate. The encounter ends with Lennon telling Claudio he looks hungry and bringing him into the house for a meal.

“I read up on Claudio (here) and he worked on farms and then at a Ford auto plant. When it closed he bought himself an ultra-light airplane, flew it too low and slow and the plane stalled. It landed in a tree and tore his aorta from his heart. Dec. 22, 1981 — dead at 33.

“In light of what happened a year earlier, when another obsessed fan came with the same kind of delusional narcissistic energy and took John away from everyone else, the Claudio scene was so moving and chilling and I don’t even know what.”

She and Bill engaged in a politely infuriating discussion about the validity of her fantasy claims. (Here’s a transcript of the chat from TheWrap‘s Ross A. Lincoln and Phil Owen.) Ellis’s patter struck me as robotic lunacy.

Swan excerpt: “When I gave Ellis visibility of my reporting on Monday night — that she had tested positive and that some senior staff weren’t happy because she may have exposed some people at a White House party last Friday night — she replied that it was ‘rude’ to text her after midnight, adding, ‘You must be more informed than me because I haven’t heard that.'” 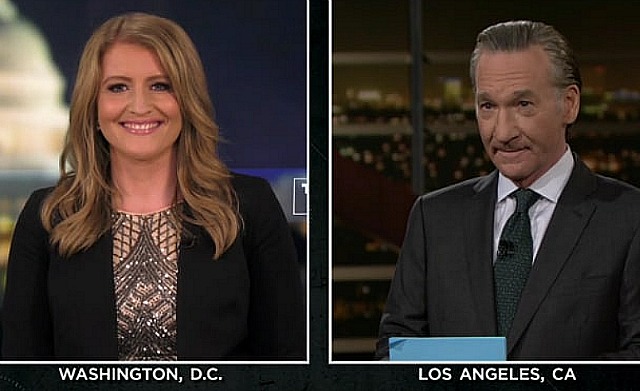