Yesterday I read portions of the late Slim Keith’s 1990 autobiography “Slim,” or more precisely the chapters that cover her marriage to legendary director Howard Hawks.

According to Slim HWH was a generous provider but not much of a husband. He was emotionally brusque. Aloof to a fault. He was mainly focused on his career, carousing, motorcycles, hunting, horses, gambling and always the company of his hotshot Hollywood friends.

The Grey Fox was distant and rote in matters of intimacy (wham-bam). He apparently liked the “idea” of Slim more than who she actually was. HWH mainly valued her as the ultimate “Hawks woman” archetype — a frank manner, social elegance, sophistication, brains and arm-candy glamour.

He completely ignored their daughter Kitty when she came along, and never nurtured any kind of relationship as she grew up.

HWH was a total hound, Slim claims. By ‘45 she had told Ernest Hemingway or Leland Hayward (or both) that she couldn’t stand him.

Plus he wasn’t that much of a pilot or a sailor, she says. (Sea-sickness, air-sickness.). And Hawks always exaggerated his stories.

When the split finally happened he accepted that they didn’t have much rapport. Their marriage was basically a dead shark during the filming of Red River.

Hawks should have married someone less willful and independent. They just weren’t a match

I never knew that their Hog Canyon ranch home (in Bel Air?) was a close copy of the Connecticut country home in Bringing Up Baby. But I love that it was.

I haven’t been offered the opportunity to see Sam Levinson‘s Malcom & Marie (Netflix, 2.5). Shot on 35mm black-and-white film, it says here…sold on this aspect alone. On the other hand the trailer feels simultaneously thin and exhausting. Then again it’s only a trailer.

Levinson wrote the screenplay in six days, and rested on the seventh. John David Washington and Zendaya costar, and no one else. Pic was shot inside the “Caterpillar House” in Carmel between 6.17 and 7.2.

Boilerplate: “A filmmaker (Washington) returns home with his girlfriend (Zendaya) following a celebratory movie premiere as he awaits imminent critical praise and financial opportunities galore. The unexpected happens as revelations about their relationships begin to surface, etc.”

…what your country didn’t do to you or for you…ask what kind of spoiled, submental jerkwad coward you might be deep down. From one drawlin’, baseball-hat-wearin’ personality (aka Corey “The Buttercream Dream” Forrester) to a community of rightwing, red-hat-wearin’ dudes who might share the same accent but that’s about all.

I’ve read a lot about Rock Hudson over the years, but until this morning I’d never read Boze Hadleigh‘s q & a with the guy, titled “Scared Straight.” It was apparently based on interviews Hadleigh did with the middle-aged Hudson in ’77 and ’82. It was published in a January/February ’87 issue of GQ.

Hudson died of AIDS on 10.2.85. Hadleigh had apparently persuaded the closeted star to talk frankly about his sexuality, career and related Hollywood politics with an understanding that it wouldn’t be published until Hudson changed his position or had passed on, whichever came first. 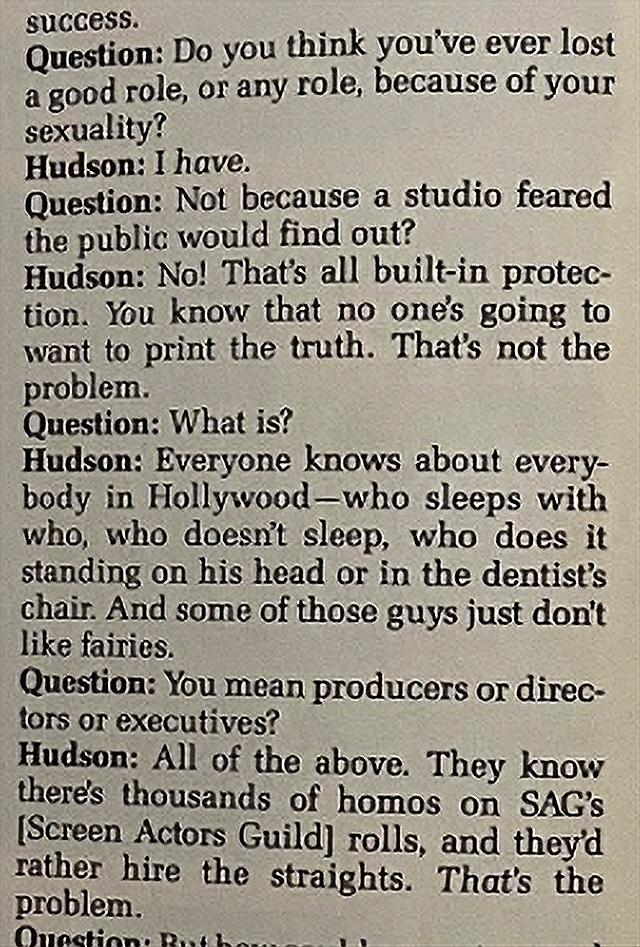 Hats off to Arnold Schwarzenegger for assessing the current situation and expressing at just the right pitch.

My only reservation concerns the musical score. Aside from the questionable decision to use music at all, it’s too pronounced, too pushy. It’s almost as if Chris Nolan and his Tenet team mixed it. I was reminded of Marc Shaiman‘s patriotic uplift music when Michael Douglas delivers his big cathartic speech at the end of Rob Reiner and Aaron Sorkin‘s The American President (’95). Ditto the scoring of Anthony Hopkins‘ courtroom speech near the end of Amistad.

That said, Schwarzenegger comparing the 1.6.21 Capitol Hill riot with “Kristallnacht“, or the Night of Broken Glass, is dead on, especially when he recalls memories of the disruptive actions of his Nazi-supporting alcoholic father, Gustav. Key quote: “I know where such lies lead.”

Devin Nunes on the sudden death of Parler…hah! I know I shouldn’t be gloating, but it feels so good. Just let me enjoy the slapdown. A good portion of the Parler loonies are were on the same seditious wavelength as the “chans” — 8chan, 4chan, endchan — and certain sub-Reddit groups. Ejecting those jerkwads from Google, Apple and Amazon platforms seems like a reasonable reaction for now. The nutters pushed it too far — this is their punishment, and to hell with their lunatic denial rants either way.

Russian opposition leader Alexei Navalny: “The ban on Twitter is a decision of people we don’t know in accordance with a procedure we don’t know. In my opinion, the decision to ban Trump was based on emotions and personal political preferences. Don’t tell me he was banned for violating Twitter rules. I get death threats here every day for many years, and Twitter doesn’t ban anyone.”