Flimsy and debt-besieged even before the 2016 election, the Trump empire is in even worse shape now.

After the 1.6 Capitol insurrection and yesterday’s Impeachment 2.0, all the big corporate interests consider Trump a pariah and are cutting ties. In terms of his present financial interests (hotels, golf courses) he’s starting to look like a serious loser. Or, if you will, a dead man. No Twitter, no nothin’.

Not to mention the IRS hounds and the coming prosecutions from New York State Attorney General Letitia James and Manhattan District Attorney Cy Vance. If Trump were to liquidate everything he owns, could he even pay off the alleged $400 million he owes? Maybe but then what?

Yes, he could theoretically build a media company upon his 75 million looney-tune rightwing followers, but one way or the other he’s going to spend the rest of his life in court, and gradually — here’s the real killer — the news media is going to lose interest in him.

How much longer will he live with his fast-food diet and all? Ten years? Less?

Incidentally: I like Secular Talk‘s Kyle Kulinski, who’s pretty sharp, can think clearly on his feet and as of last summer had 848,000 YouTube subscribers and roughly a half-billion YouTube views.

But where’s the curtain liner? And what about my Reverent Runt bath mat, for extra traction while showering? Barry Lyndon soap-on-a-rope comes in four different fragrances — sandalwood, Irish tree moss, green aloe and Turnberry spice. And for women, a delicate Lady Lyndon semi-transparent bath shawl for wearing in the bath or under the shower as women of social distinction never bathe naked.

“It was in the reign of George III that the aforesaid personages lived and quarreled; Good or bad, handsome or ugly, rich or poor, filthy or showered, they are all equal now.” — Posted earlier today on Facebook by director-producer-screenwriter Larry Karaszewski. 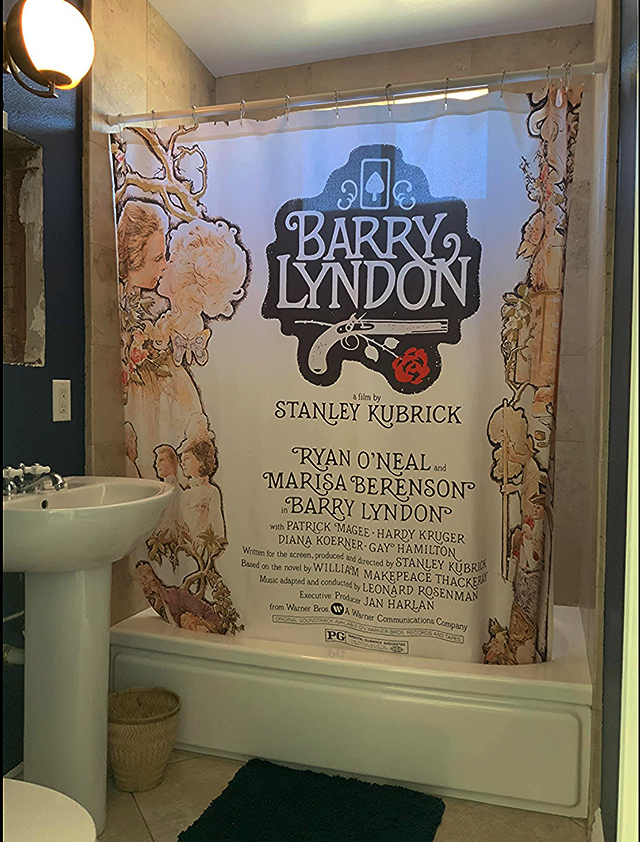 It’s basically about Jeremy Renner‘s Sgt. James, a bomb-defusing expert but more fundamentally a danger freak and an adrenalin junkie. He doesn’t like flirting with the possibility of being blown to bits — he loves it, or at least the feeling of momentary triumph when he overcomes that threat.

The other two members of the bomb-defusal team — Anthony Mackie‘s Sgt. Sanborn and Brian Gerahty‘s Specialist Eldridge — don’t love flirting with death and pretty much hate James’ recklessness, and there’s the basis of the dramatic conflict.

And then David Morse‘s Colonel Reed arrives on the scene and offers a little comic relief. He’s not appalled by James’ hot-dog behavior — he’s half-amused, perversely tickled, tee-hee. “Well, that’s just hot shit,” he says to James, grinning and beaming like a fan. “You’re a wild man…you know that?”

My favorite moment comes when he asks James how many bombs he’s defused, and James tries to deflect. Reed is having none of it: “Sergeant, I asked you a question.” What follows is pure hilarity, pure relief. Every tension-wracked film needs a guy like Reed to pop in sooner or later.

Said this ten years ago, saying it again: The Hurt Locker needed to end with Renner staring at the rows of cereal boxes in the supermarket. We didn’t need to see him go back to Iraq. The cereal boxes said it all. 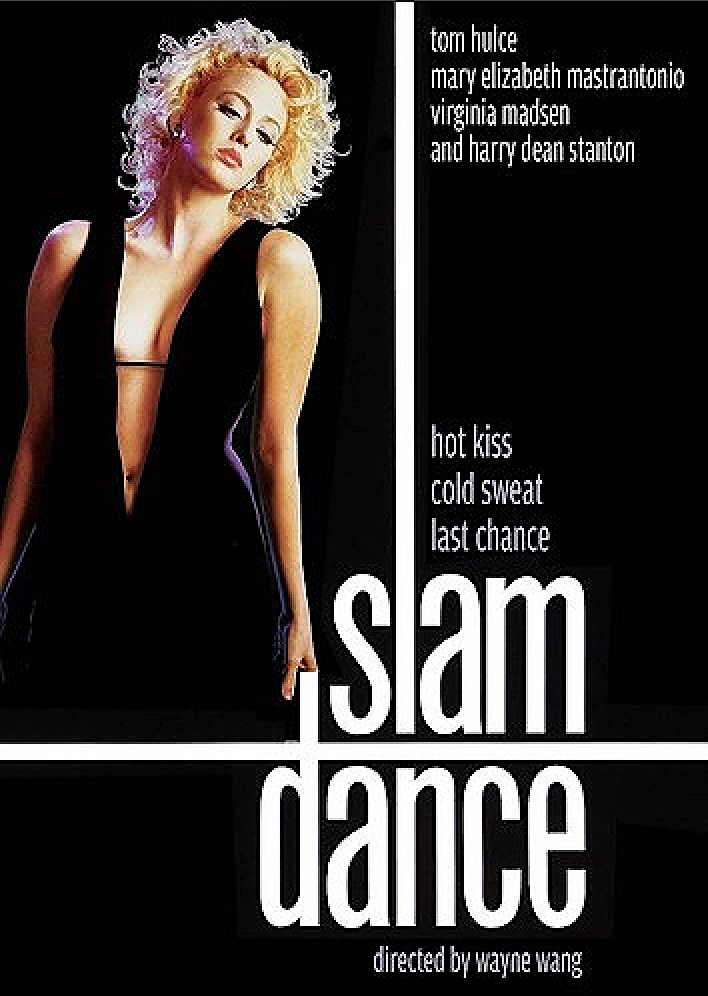 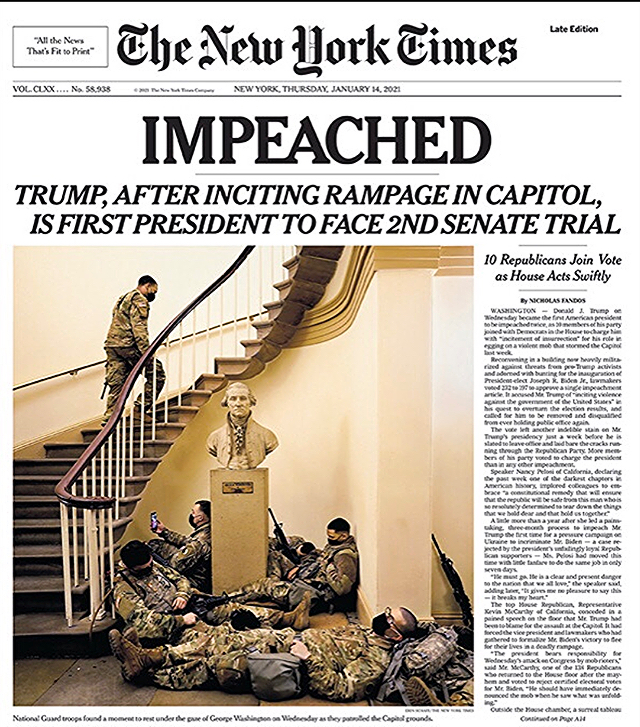 THR‘s Scott Feinberg has posted an interesting “Awards Chatter” discussion with Best Actor contender Ben Affleck, whose performance as a recovering alcoholic in Gavin O’Connor‘s The Way Back is arguably his best performance ever…certainly his most life-reflecting by way of naked revelation.

Standout Affleck quote: “One of the things that happened to me was that I was forced to really honestly look at myself — my failings, my shortcomings, my character flaws — to find accountability, to not hide or run from feelings. And I developed a much greater access — this sounds very actory, so forgive me — to the full range of my emotions. I have had so many more life experiences and so much more to bring to a performance. Now, I feel like a much, much better actor than I’ve ever been. And I love it.”

The Way Back (Warner Bros., 3.6) was the last film I saw in a screening room before the pandemic hit. Here’s my 3.4.20 review, titled “Sincere Muted Respect for ‘The Way Back'”:

Last Friday I mentioned something I’d heard about Gavin O’Connor and Ben Affleck‘s The Way Back, a sports redemption drama about an alcoholic basketball coach. The thing that I heard (and that I shared) is that “it’s not Hoosiers.” I saw it the night before last, and it isn’t.

But you know what? In some ways Brad Inglesby‘s script is as dramatically reputable as Hoosiers — it’s rooted in a real, recognizable, occasionally unfair world of fundamentally decent but occasionally flawed peopleGavin O’Connor’s . And O’Connor’s direction is respectably lean and dutiful, pared-to-the-bone and bullshit-free.

And Affleck’s lead performance…well, he certainly knows what it’s like to be a middle-aged drunk, doesn’t he? That authority and experience filter through. The cynicism, the swearing, the hair-trigger eruptions, the lethargy. It’s acting, of course, but without “acting.” And that’s no small feat.

And the film itself is definitely decent. Not levitational but sturdy. I’m giving it an eight. Not an eight-point-five but an honest eight.

Because, for the most part, it isn’t Hoosiers. It’s a step-by-step story about a guy with a serious problem, and while it’s embroidered and punctuated with basketball issues and strategies and the usual ups and downs, it doesn’t turn on the game. It turns on what Affleck’s character, a divorced construction worker who gives up boozing after taking a coaching gig for the same South Bay basketball team that he gloriously played for in the early ’90s, does about his addiction.

In all my years of searching for color shots of significant films playing in Times Square during the ’40s to mid ’60s heyday, I’ve never come across a full-color snap of the Capitol marquee during the run of From Here to Eternity. Until today, that is. An eventual winner of eight Oscars (Best Picture, Best Director / Fred Zinnemann, Adapted Screenplay, Supporting Actor / Frank Sinatra, and Supporting Actress / Donna Reed), Eternity opened at the Capitol (B’way and 51st) without a premiere and on a sweltering weekend to boot. Plus the Capitol had no air-conditioning. 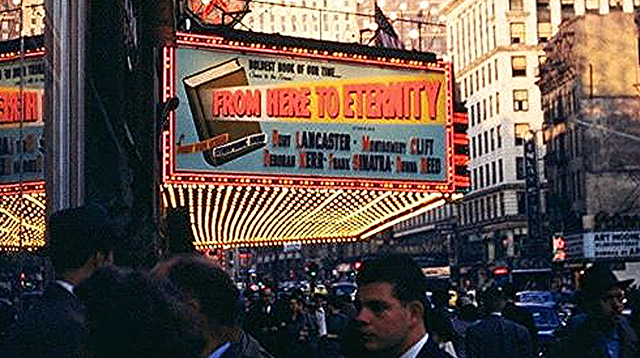 Sometime early in the From Here To Eternity engagement, probably in September or October 1953. 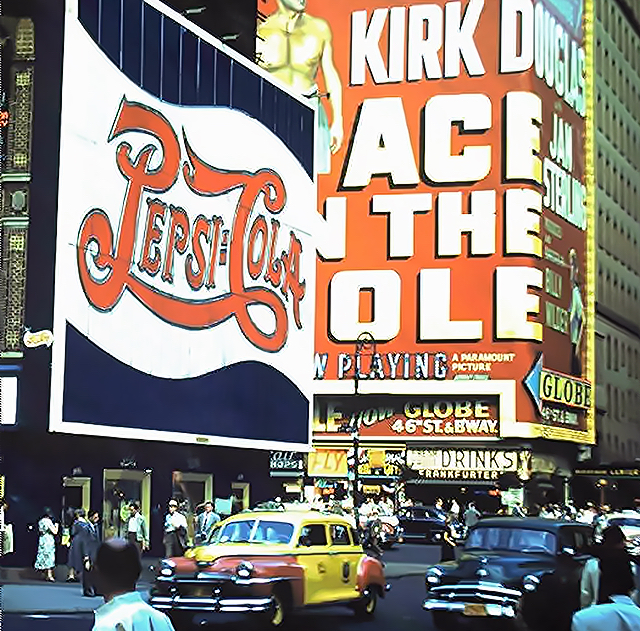 If I remember correctly, Kirk Douglas never once takes his shirt off in Billy Wilder‘s Ace In The Hole (’51). He was well-known, of course, for displaying his brawny physique in Mark Robson‘s Champion (’49), which had made him a star two years earlier. So the Ace in the Hole billboard marketing guy said “fuck it, let’s try and sell this cynical, bitter film about heartless journalism as a Champion reboot.” 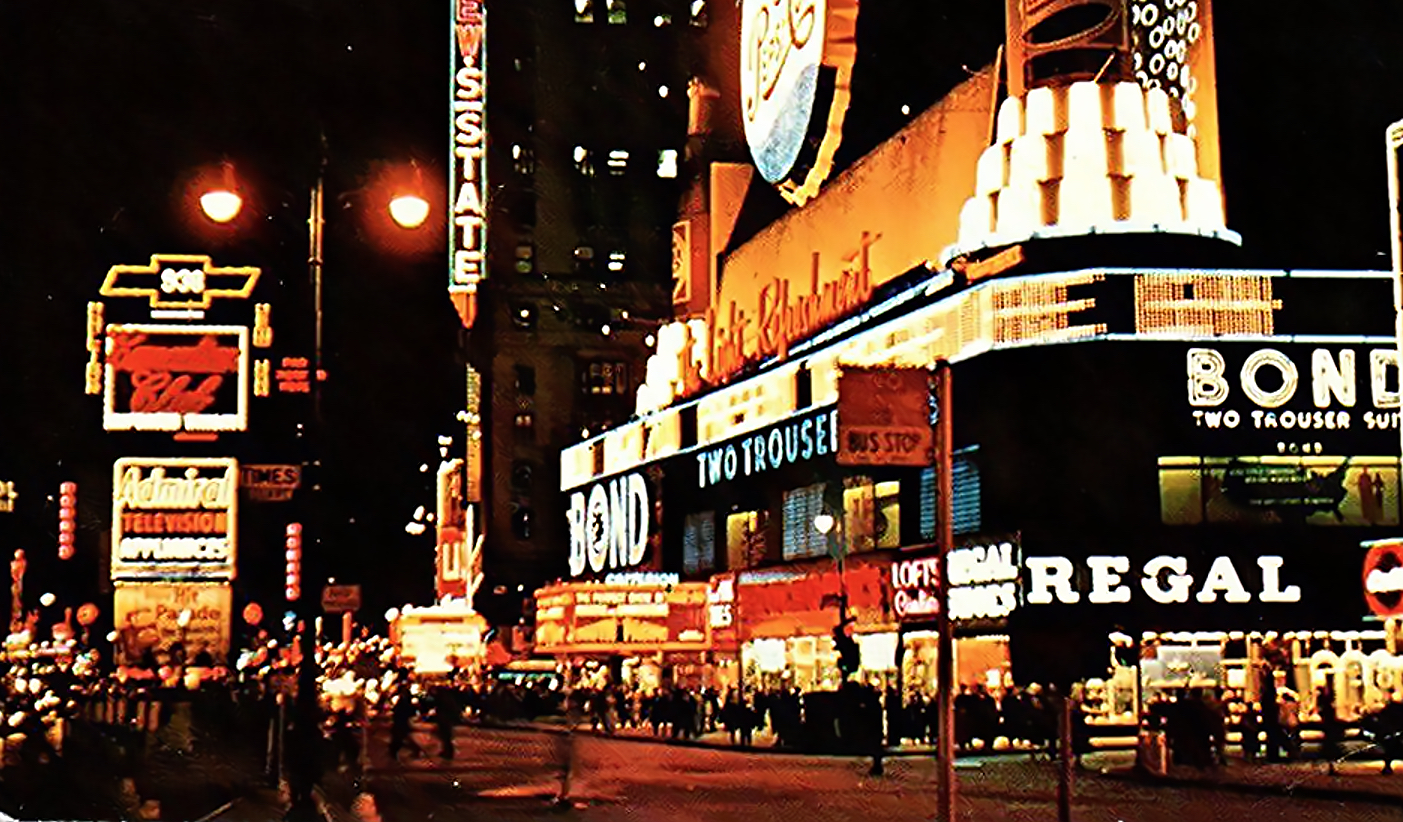 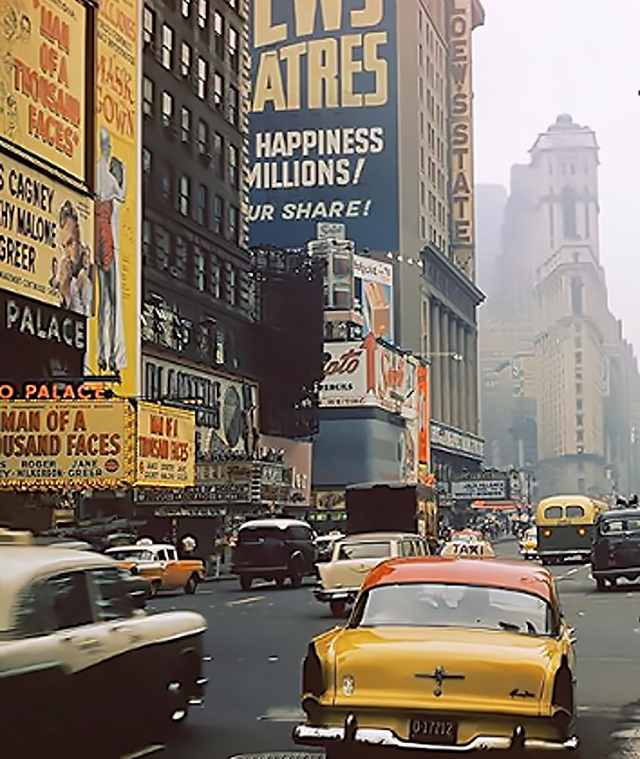 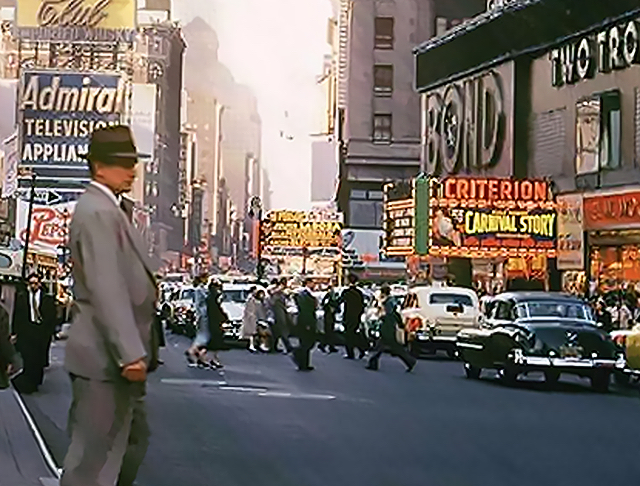 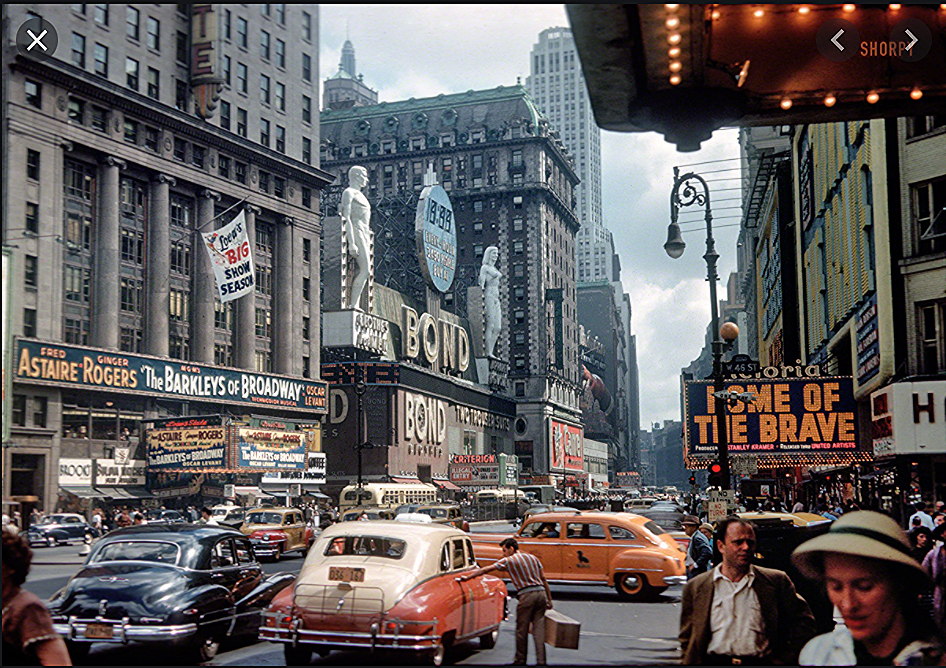 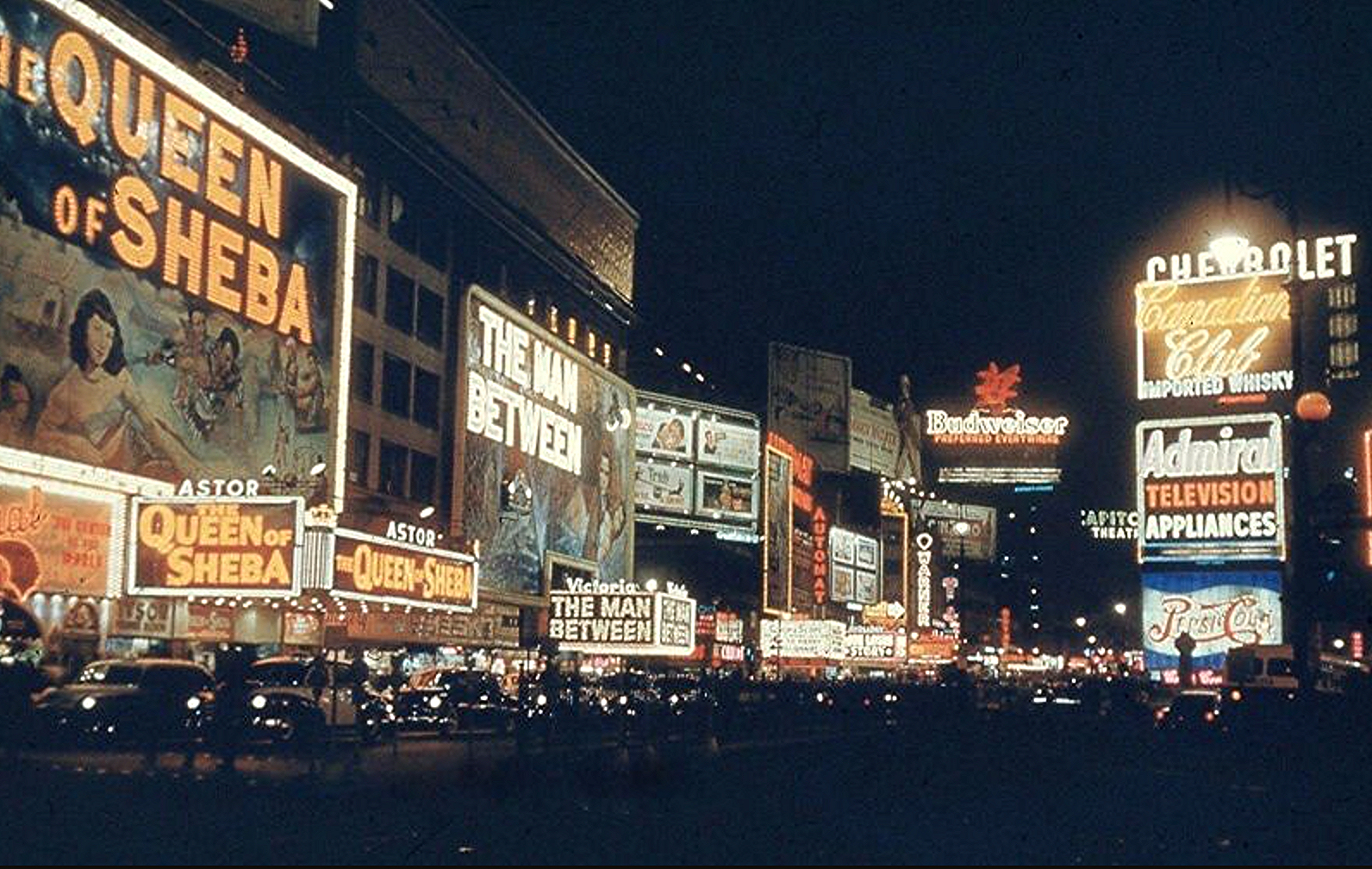