Herewith the first images from Michael Showalter’s The Eyes of Tammy Faye (Searchlight, 9.17). Jessica Chastain as the late Tammy Faye Bakker; Andrew Garfield as the still-living Jim Bakker. Yokel bumblefuck hypocrite hustlers of the lowest, slimiest and most shameless order. Only in rural America…

It pains me to consider the possibility, much less admit, that the sociopathic Mussolini and would-be Democracy destroyer Donald Trump might have been correct last year when he theorized that Covid-19 originated with a lab leak.

Rightwing nutters are theorizing that Dr. Anthony Fauci, America’s top infectious disease guy who curtly dismissed the lab leak theory but has more recently come around, may be half-complicit in the Wuhan Institute of Virology lab-leak error (if it indeed happened). Also that he had “potentially conflicting ties to China’s top scientists and the very lab under suspicion.”

From “Former MI6 chief says any Wuhan lab leak evidence has likely been destroyed,” posted in The Independent on Thursday, 6.3:

“Any evidence of a lab leak that may have caused the Covid-19 pandemic would likely have been destroyed by Chinese officials by now, a former MI6 chief has claimed.

The former intelligence chief, head of the UK’s spy agency between 1999 and 2004, has previously said the novel coronavirus is “far more likely” to have come from a lab than an animal.

Wiki page: “Chairman of the Board is a 1998 American comedy film, directed by Alex Zamm and starring Carrot Top (aka Scott Thompson) in his only lead role in a feature-length film.

“The screenplay, written by Al Septien, Turi Meyer and Zamm, is about a surfer and inventor named Edison who inherits and runs a billionaire’s company.

“Pic was poorly received by both critics and audiences. Both Carrot Top and supporting player Raquel Welch received Razzie nominations for the 1999 Golden Raspberry Award for their performances in the film.”

Chairman of the Board costar Courtney Thorne Smith was the guest on Conan o’Brien. Initial guest Norm McDonald was to her right. The good stuff begins at 4:50, picks up steam around 6:00, peaks at 6:50.

Morgan Neville‘s Roadrunner, a doc about the late Anthony Bourdain, will open in theatres on 7.16. The world premiere happens on June 11 at the Tribeca Film Festival.

Posted on 6.8.18: “I am stunned and appalled that Anthony Bourdain, a sensualist and an adventurer whom I admired like few others, a guy who adored sitting on a plastic stool and eating Bun Cha in Hanoi as well as scootering through rural Vietnam as much I have, a late bloomer who’d lived a druggy, dissolute life in the ’70s and ’80s but had built himself into great shape and had led a rich and robust life in so many respects…I am absolutely floored that Bourdain has done himself in.

“Bourdain was right at the top of my spitball list of famous fellows who would never, ever kill themselves because he seemed so imbued with the sensual joy of living, who had found so much happiness and fulfillment in so many foods and kitchens, in so many sights and sounds and aromas and atmospheres, travelling and roaming around 250 days per year and inhaling the seismic wonder of it all.

“Bourdain apparently suffered from depression, or so it’s being said this morning. He was 61, and by all indications was at the absolute peak of his personal journey. Like me, Bourdain’s life didn’t really take off until the late ’90s, when he was in his early 40s. But when everything finally fell into place and he became famous and semi-wealthy, he seemed to revel in the feast but without losing his head. He always kept his sanity and sense of modesty.

“In a perfect world Donald Trump would hang himself in his White House bedroom and Bourdain would go on living and travelling and taping episodes of Parts Unknown until he was 98 and perhaps beyond.

Hollywood Elsewhere is cool with not attending the 2021 Cannes Film Festival. Okay, I can’t afford it this year but I probably wouldn’t be going anyway if I was flush. Even for fully-vaxed, all-but-bulletproof types like myself the pandemic situation still seems a bit dicey and sketchy. For myself and many others, the only 2021 festival that will really count is Telluride, and I for one can’t wait for that puppy.

I realize this reads like an overly brief assessment, but the Cannes voltage is low this year…face it. The pandemic timetable was stacked against it.

No comment about Amazon’s $8.5 billion acquisition of MGM, which has been a nothing brand for decades. Nor was I particularly stirred by Cynthia Littleton’s assessment of the situation. All I care about is whether or not we’ll soon be hearing the Trump tapes that MGM TV honcho Mark Burnett has been sitting on since ’16 or thereabouts. The rest of the questions will sort themselves out.

What I’m most impressed by right now is the Jeff Bezos roaring lion art by Variety‘s Cheyne Gateley. 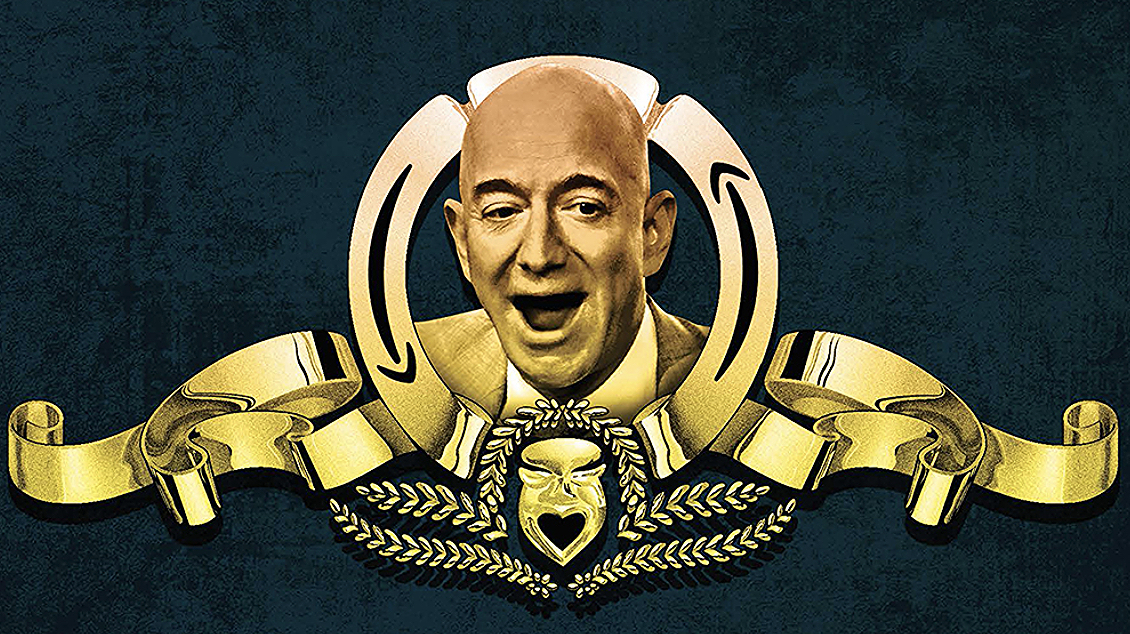 Hollywood Elsewhere is unhappy with Angelina Jolie being unhappy with a court’s recent decision to temporarily award Brad Pitt joint custody of their children, according to reporting by Us magazine’s Eliza Thompson.

The 45-year-old star of Those Who Wish Me Dead and the forthcoming The Eternals is “bitterly disappointed” after Judge John Ouderkirk ruled in favor of her ex-husband, 57, earlier this month. The former couple — engaged in 2012, married in 2014, separated since September 2016 — have been fighting over custody of their six kids for nearly five damn years.

Jolie “will never forgive” Pitt over this, a source has told Thompson. The source claims that Jolie will use “everything she’s got” to appeal the arrangement. “She maintains it’s far from over and still believes that justice will prevail.”

Who fights custody particulars year after year after year? I’ve been divorced with young kids hanging in the balance. The best thing is to think of the kids’ emotional interests, period. Whatever your nagging arguments may be against your ex, you let it go.

Jolie, who lives high on the hog with the kids in her Los Feliz mansion, reportedly wants Pitt to cough up more in the way of child support. They’re both multi-millionaires, and the kids have obviously been living lives of lavish privilege all along. On top of which they’re almost certainly all wokesters.