True story: “I was driving along Melrose Ave. near Doheny in late 1983. (Or was it early ’84?) I noticed that a new BMW in front of me had a framed license plate that came from a dealer in Westport, Connecticut, where I had lived only five years earlier and which is next to my home town of Wilton.

“I pulled alongside the Beemer and saw right away that the driver was Anne Baxter, who looked pretty good for being 60 or thereabouts. I rolled down my window and said, “Hey, Westport…I’m from Wilton!” And Baxter waved and smiled and cried out “Hiiiiii!” [Originally posted on 2.8.13.]

I realize that many Millennials and Zoomers have no idea who Baxter was, but eventually a generation will come along that has never heard of them. I can’t recall the name of the Westport dealership where Baxter bought her Beemer. For decades Baxter lived at 25 Knapp Street in Easton.

When it comes to nude scenes, women don’t have to worry about whether they’re showing attractive equipment when the director shouts “action!” But guys do, of course. In Terry Southern‘s “Blue Movie” a coarse, Joseph E. Levine-like producer named Sid Krassman is persuaded by a Stanley Kubrick-like director named Boris to perform in a sex scene, and Krassman is very worried about not having enough “heft” before filming begins. We’re all familiar with “some show, others grow.” We all want to be horses but male biology has never been especially obliging in that regard.

I caught Stephen Karam‘s The Humans (A24, 11.24) early yesterday afternoon. It won’t open for another six or seven weeks, but it was reviewed out of Toronto so it’s fair to jump in.

This is a highly respectable, surprisingly “cinematic” adaptation of Karam’s 2016 play, which he’s filmed unconventionally by emphasizing distance and apartness and narrow hallways and deep shadows, with a particular emphasis on material rot inside the apartment walls and a general sense of architectural foreboding and claustrophobia.

All the performances are top-notch, especially Jane Houdyshell‘s. Her performance as the maritally betrayed, care-worn mother of two grown daughters (played by Beanie Feldstein and Amy Schumer) is almost Oscar-level. It needs an extra “acting” scene or two, but she’s very good.

As usual I had trouble understanding all of Feldstein’s dialogue, as she always seems to emphasize emotional tonality and a certain sing-song manner of speaking as opposed to adhering to the old-fashioned practice of (I know this is a bad word but I’m going to say it anyway) diction.

Oh, and I didn’t believe for a single millisecond that South Korean heartthrob Stephen Yeun would partner with Feldstein, a seriously overweight woman in her late 20s…a woman who is headed for serious health problems down the road if she doesn’t follow in her brother’s path and drop some serious pounds. Feldstein and Yeun just aren’t a match, not in the actual world that I’ve been living in for several decades, but along with “presentism” and color-blind casting it’s also become a “thing” to cast obese actors in this or that role and then require their fellow cast members to pretend that obesity is fine and normal and “who cares?”

Schumer is fine as the depressed older sister.

The warmest emotional moment comes when the murmuring, blank-faced, Alzheimer-afflicted June Squibb (as grandma) joins in and says grace. Twice. This plus the Thanksgiving “what we’re thankful for” moments at the table are the only emotional touchstones in the whole film.

Richard Jenkins, Houdyshell’s husband, confesses to having lost his job (and therefore — did I hear this wrong? — his pension and insurance) due to an apparently brief affair with a coworker. In short, after being with a company for X number of years, they decided to cut his head off and destroy his life because of a single workplace sexual episode. And then the two daughters, after hearing of this, have to lay their #MeToo-ish judgments on withered old dad, along with their natural resentment for his having hurt their mother’s feelings, etc.

May I say something? 74 year-old Jenkins is too old to have had an affair. The workout club manager he played in Burn After Reading, maybe, or the guy in The Visitor or the gay FBI agent in Flirting With Disaster but his Humans dad is way, way past it. Grey haired, paunchy, neck wattle…forget it. In movies as in life you’re allowed to have crazy extramarital affairs up until your early 60s (if you look good), but not beyond that.

Let’s be honest here — this is an “artfully” shot (oooh, look…80% of the time Karam keeps the camera a good 20 to 30 feet away from the actors!) but VERY morose film about some seriously depressed people whose lives are almost certainly on the way down with no hope of escape or redemption. It isn’t long before you feel stuck — imprisoned — in this apartment, and in Karam’s play. No tension, no gathering story strands….it’s just slow-paced conversational misery and confession and gloom.

The Humans is certainly not comedic. Yes, there’s an element of horror in the building itself — it’s a terrible, TERRIBLE place to have a Thanksgiving dinner in, much less reside in, what with the groanings and stompings and filthy windows and pus bubbles and canker sores on the walls. And it’s not just this family of seven that’s stuck in this horrible environment — we’re all stuck in it, and there’s no getting out.

If they could somehow convince Dave Chappelle to host the ’22 Oscar telecast, and I mean with the understanding that (a) he gets to say any damn thing he wants in the opening monologue, and (b) that there might be two or three subsequent monologues during the show, depending on what comes to mind…

If they were to do that I swear to God the show would be saved from that horrible Soderbergh after-stink that has been in the air since last April. With “I have my own way of seeing things” Chappelle hosting, most of that deranged woke shit would just fly out the window.

This morning HE commenter “LAislikenowhere” wrote the following: “Blacks. 13% or 14% of the population. But look for 85% representation in every award category (nominated or presenting). Because woke. Most people are right to be a bit WTF about this overcorrection. I swear this shit is fermenting more racism than existed three years ago.”

But you know what Chappelle has said about this? I don’t have the exact quote but it goes something like “400 years of black people being shit on…we’ve earned a little over-correction.” I swear that Chappelle in white sneakers and smoking a cigarette could restore the Oscar brand — all by his lonesome he could save it. They should sign him for five years straight.

So I can speak with authority when I riff on George Clooney‘s adaptation of J.R. Moehringer‘s The Tender Bar (Amazon, 12.17), which debuts at the BFI London Film Festival on Sunday, 10.10.

“It’s ‘good’ in the sense that Baker isn’t afraid to show his lead character, Simon Rex‘s “Mikey Saber”, dive into gross and reprehensible behavior but most of the supporting players besides. We’re talking bottom-of-the-barrel Texas trash here. Nor does Baker feel obliged to deliver some form of moral redemption for Mikey, which I respect. Yes, Baker occasionally delivers slick chops and whatnot, and yes, Mikey has a sizable horse schlong (even when flaccid), but the scuzz factor in this film is REALLY rank. It was not a pleasant sit, but that’s the point, I realize.

“The Galaxy crowd totally hated it — a quick shattering of applause and then silence and hasty exits.” — posted from the Telluride Film Festival on 9.4.21. 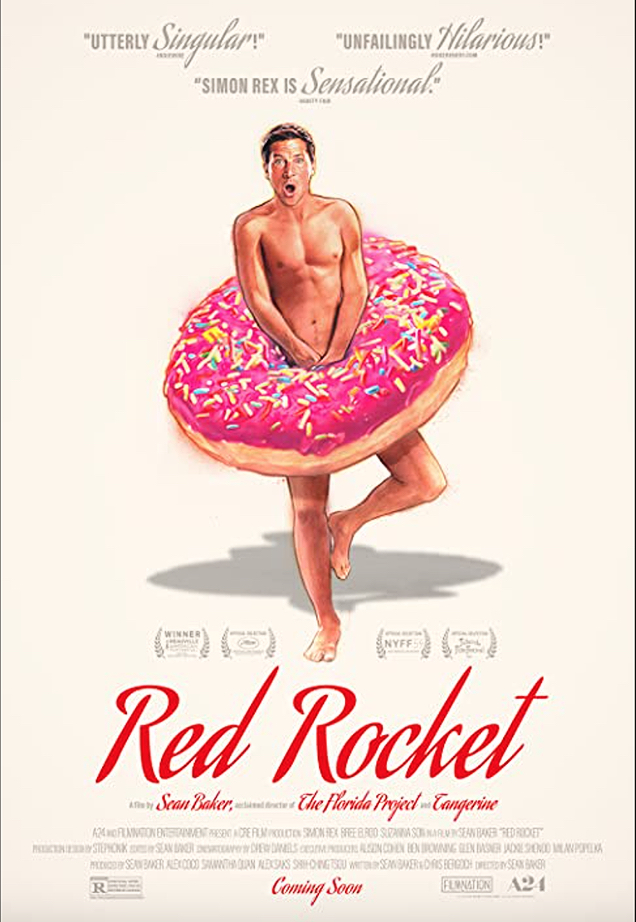