Support on Patreon Follow @wellshwood
50 Comments
What B&W Films Should Have Been Shot in Color?

I happen to love black-and-white for its own silver-toned luminosity, but every so often you say to yourself “good as it looks, this monochrome film would have been fascinating in color.”

Howard Hawks‘ Red River is at the top of this list. I would have dearly loved to see Billy Wilder‘s Sunset Boulevard in Techniolor…how could it have been hurt by that? And speaking of Hawks, Only Angels Have Wings and Bringing Up Baby would have been glorious in color. Which others? 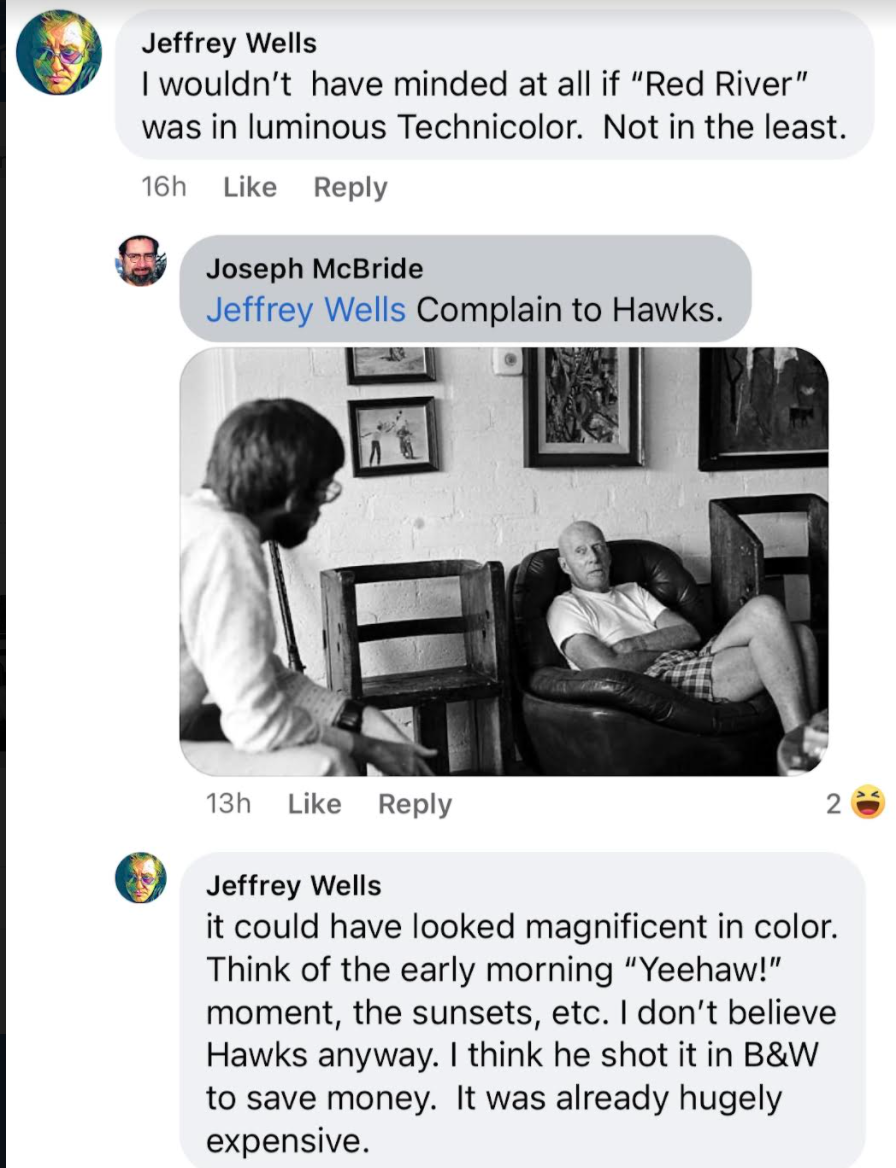 Sarandos basically doubled down on Netflix’s support for Chappelle and reiterated the company’s intention to not pull The Closer.

I wish I could report that Sarandos’ email also said something like “a lot of us are frankly tiring of woke Twitter fanatics losing their shit whenever a performer says or tweets the wrong thing, including things they may have said 10 or 20 years ago, the idea being to cancel a show or ruin a career and generally spread terror throughout the community.”

I would be an even happier man if I could add that Sarandos wrote, “I’m not the only one who’s sick of this woke bullshit. Almost everyone is, and I’m talking about moderate liberals and people like Chappelle and Jimmy Kimmel and Sasha Stone and Bill Maher and Jerry Seinfeld as well as Average Joes and Janes who watch Netflix.

“Most of us hate you, in fact, and we’d really like to dump you on some South Pacific island so you can all torture and cancel each other and leave us the fuck alone.

“Woke crusades started out great in ’16, but it quickly got out of hand, and over the last three or four years the liberal media world has been snowflaked and Twitter-terrored to death, and a lot of us are really sick of it. And if you don’t like me saying this out loud, that’s too fucking bad. Because you can always quit.”

Alas, Sarandos didn’t say any of this. But I’ll bet you twenty dollars that he was thinking at least some of it when he wrote the message.

“We know that a number of you have been left angry, disappointed and hurt by our decision to put Dave Chappelle’s latest special on Netflix,” Sarandos wrote in an email obtained by Variety.

“With The Closer, we understand that the concern is not about offensive-to-some content but titles which could increase real world harm (such as further marginalizing already marginalized groups, hate, violence etc.)

“Last year we heard similar concerns about 365 Days and violence against women. While some employees disagree, we have a strong belief that content on screen doesn’t directly translate to real-world harm.

“The strongest evidence to support this is that violence on screens has grown hugely over the last thirty years, especially with first-party shooter games, and yet violent crime has fallen significantly in many countries. Adults can watch violence, assault and abuse — or enjoy shocking stand-up comedy — without it causing them to harm others.”

Donnelly: “That Sarandos would wade into a debate about the potential harmful effects of content is notable, given that those who condemn Chappelle’s jokes have specifically cited the physical danger that anti-trans ideology poses to that community.”

Is this the beginning of the end of woke terror and a return to sensible liberalism? Maybe, maybe not. But it smells to me like teen spirit.

It sounds as if Voir, a forthcoming Netflix doc from the hearts and minds of David Fincher and David Prior, is made for film monks…a spiritual current thing for hardcores. I’m obviously speculating but they’re forcing me to fill in the blanks. “A collection of visual essays [about] the love of cinema” sounds kinda vague.

By the same token I could point to a random grab bag of 10 or 20 essays that I’ve written on Hollywood Elsewhere over the past 17 years and call them “a collection of impressionistic essays about the love of cinema”, and they would be.

I could write, produce and star in a short Netflix documentary about Roger Thornhill‘s R-O-T matchbook in North by Northwest — who thought it up, who made the prop — and how the R-O-T monogram becomes a hugely important plot element in Act Three. I would honestly love to watch, say, a 20-minute doc about that.

“Voir” is French for “see,” which obviously alludes to special sight. Things in a film that are best seen or appreciated in an educated-film-buff, taking-it-all-in sort of way…seen by way of particular perception or insight.

Great, but my tongue doesn’t like saying “voir.” Noir, yes — voir, no. I’m saying it over and over, and my mouth keeps saying “leave me alone.”

I’m thinking of a favorite Stanley Kubrick quote: “The truth of a thing is in the feel of it, not the think of it.” In line with that, if I’m being offered a film buff doc with a French title, I’d probably prefer Ressentir (feel, experience, be affected by) or Toucher (touch, affect, feel, hit, receive, contact) or even Lumiere.

Drew McWeeny (whose former podcast buddy Scott Weinberg did a lot to hurt me with two or three film festivals during the summer of ’18, and who, I feel, is not only a fiendish, foam-at-the-mouth personality but has accumulated the most rancid karma imaginable in this journalistic sphere) has revealed that he’s one of the costars (or co-authors) of Voir, and that he’ll be at next month’s AFIFest screening.

McWeeney: “Voir [is the spelling ALL-CAPS or CAPS optional?] is, simply put, the thing I have been working on for the last few years and the project I am most excited about right now. It is a streaming series for Netflix that is hopefully not like any other show about movies that you’ve seen.

Torn and Frayed
I'm sick of watching teasers, trailers, endless come-ons and sales pitches for the endlessly delayed fucking Peter Jackson Let It Be doc (which is now a six-hour thing debuting between 11.25 and 11.27 on Disney +) and the Let It Be super-deluxe 5 CD bullshit box set (debuting on 10.15). Sick of it! Login with Patreon to view this post
October 13, 2021 1:48 pmby Jeffrey Wells
25 Comments
Shatner Saw, Felt, Grew Within

Right after emerging from a ten-minute flight aboard the Blue Origin capsule, 90 year-old Bill Shatner was clearly moved. He had seen the earth from God’s perspective, and experienced, he said, perhaps the most profound moment of his life.

Thought #1: “We say, ‘Oh that’s blue sky.’ And then suddenly you shoot through it and all of a sudden you’re looking into blackness.” Thought #2: “Everyone needs to have the philosophical understanding of what we’re doing to Earth.”

Anyway, the former Captain Kirk — silver-haired, squinty-eyed, hale and hearty and a bit stiff — tried to share a few reflective, meditative thoughts with Amazon honcho Jeff Bezos. But the asshats behind them were making so much noise screaming and popping champagne corks that Bezos was torn — he wanted to hear Shatner’s thoughts but on the other hand there was the cool spray of Dom Perignon and “whooaa-whoo-whoo!” behind him. Yeah!

The asshats were basically celebrating themselves — “We did this! We rose above the earth because Jeff chose us but also because we were good enough to be chosen!” But Shatner had deeper, humbler things on his mind. Think of the Dave Bowman star child looking down upon our blue planet at the end of 2001 A Space Odyssey…that’s Shatner.

Most of us, I suspect, feel nothing but derision and contempt for the others. Imagine emerging from your first visit to the Sistine Chapel and high-fiving your homies and going “whoo-hooo…we saw the Michalengelo!”

Let’s suppose that Hollywood Elsewhere manages to create, say, 500 glossy white matchbooks with the famous R-O-T monogram…exact duplicates of Cary Grant’s North by Northwest matchbook. And better yet, with a handwritten note inside each one that says “they’re on to you — I’m in your room.” If I did this, how much could I charge? $7.50 plus postage? $10?

I’m figuring once it gets around that the Academy Museum is thinking about posthumously indicting Alfred Hitchcock, Ernest Lehman and Cary Grant for attempting a kind of cultural genocide against the Lakota nation, anti-wokesters will want to signal their pro-North by Northwest sympathies by owning a few R-O-T matchbooks. An Us-vs.-Them, band-of-brothers thing.

Extra-perverse idea: Perhaps I could persuade the museum to sell them in their gift store?