David Fincher and David Prior‘s Voir (Netflix, currently streaming) is a collection of six essays about film worship. I’ve watched four and they’re all finely wrought, but I have to spit something out. Despite my long friendship with Sasha Stone I can’t not say what I know to be true, which is that her autobiographical piece — “Summer of the Shark” — is the most eloquent and well-produced of the lot.

It’s the only one that reaches out and says “this, once upon a time, was me” plus “this was all of us back in the fanciful, doobie-toke Gerald Ford era, and what an impressionable time it was.” It’s about what’s gone forever and will never come back, but in another sense about what’s lasted forever.

“Shark”‘ tells a modest but fascinating little saga about young Sasha (played as a ten-year-old by Eva Wilde, and as a 17 year-old by Shannon Hayes) and her sister Lisa sinking into the captivating vortex of Steven Spielberg‘s Jaws, and how that film lit a certain fascination and devotion in both of them, and in Sasha especially.

The essay paints a swoony, sun-dappled portrait of hippie-ish Topanga Canyon and San Fernando Valley teen culture in the ’70s…detailed, lulling and just as time-trippy as Licorice Pizza in this respect…and tells how Sasha and her sister came to worship the refuge and sanctum of movies in that era (partly for the Spielberg and Star Wars-ian coolness, partly to escape from the turmoil of their mom’s bad boyfriends), etc.

Prior (whose involvement was more hands-on than Fincher’s) does a killer job of blending Jaws beach footage with recreations of Sasha’s own beach time — he and dp Martim Vian even mimic that famous zoom in-track back shot of Roy Scheider.

All in all, “Summer of the Shark” is a great little short (only around 12 minutes…longer?). I’m very proud of Sasha for having written from her heart and narrated it just so and worked so hard for so long on this thing, and (with Fincher and Prior’s expert assistance) having given it just the right touch and spin.

Walter Chaw‘s “Profane and Profound”, a delicious take on Walter Hill‘s 48 HRS., and Drew McWeeny‘s “But I Don’t Like Him”, about unlikeable protagonists, are very fine essays also.

I didn’t care for Taylor Ramos and Tony Zhou‘s “The Ethics of Revenge”, a piece about Park Chan-wook‘s Lady Vengeance (’05) — it struck me as cold and creepy. And I haven’t watched “Film vs. Television,” although I hear it’s admirable.

Friendo: “Watching Voir….your pal Sasha’s episode was good…looks like they spent some money on that one recreating the ’70s.  Then again Fincher doesn’t do anything cheap.”

Previously: “Some of our greatest cinema challenges us to really confront our own hearts in the safety of that darkened theatre. That’s part of the purpose of filmmaking.” — quote from Voir trailer.

2021 Reality Check: Movies stopped challenging or even slipping into the hearts of filmgoers with any regularity a long time ago. The only current movies that even flirt with this aesthetic are West Side Story, King Richard, Cyrano, Pig, A Hero and one or two others. Voir is therefore a nostalgia flick to a certain extent.

The dual purpose of 90% to 95% of movies is to (a) repeat and reenforce woke narratives and (b) enhance corporate revenue. 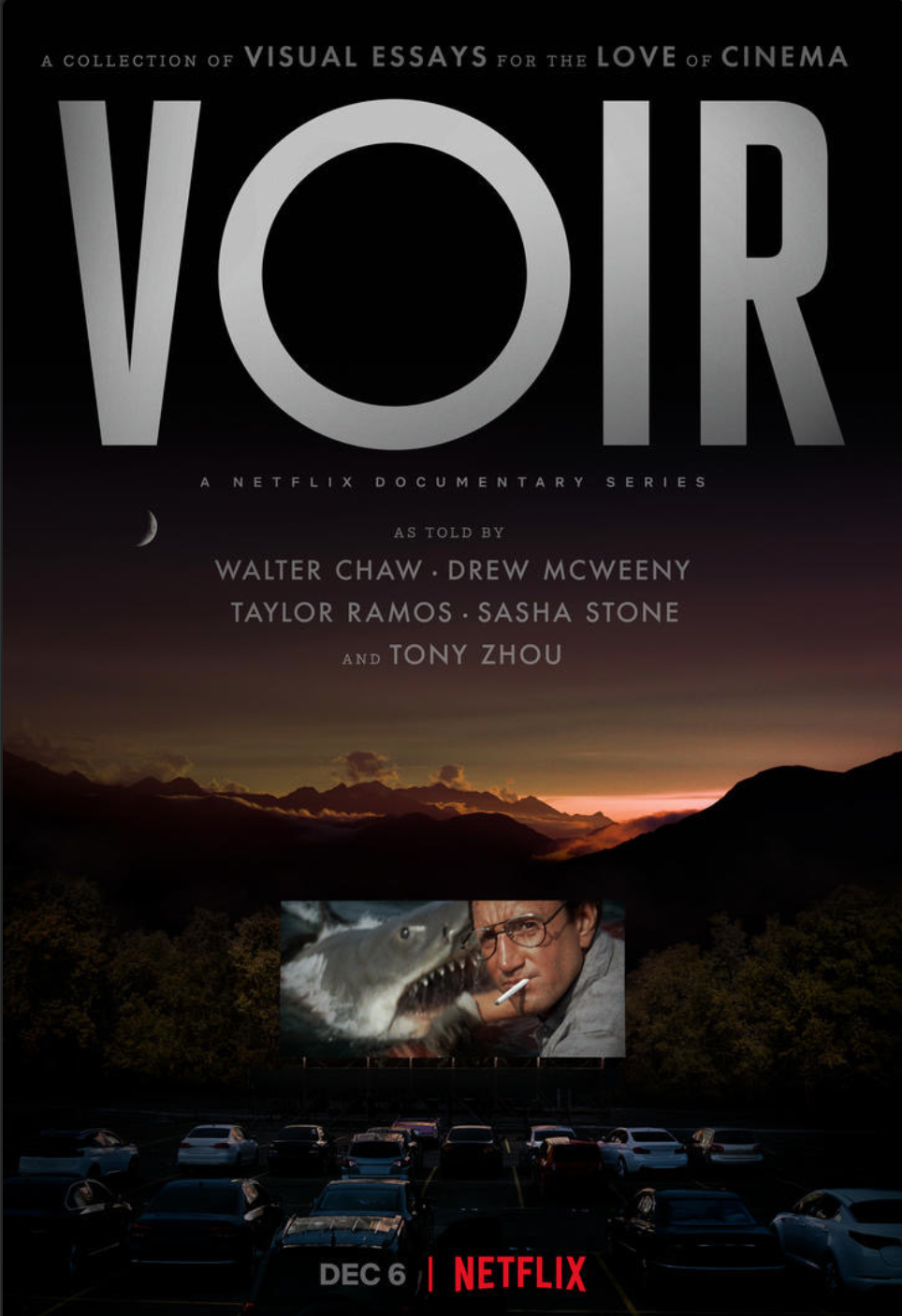 It’s not just Film Twitter that resides in a bubble; it’s a healthy majority of film critics. That aside, I respect Kristen Stewart‘s performance. She gave it her all. 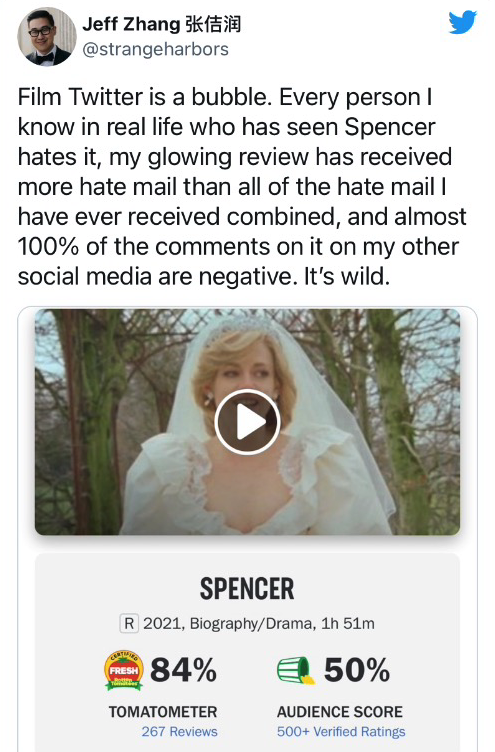 Last night Sasha Stone announced that after years of reluctance, she’s joined the Critics Choice Association — an accommodating, political-minded, awards-giving outfit whose leadership has recently come to believe they’ve supplanted the Golden Globes as the leading, default, go-to predictor of the Oscar awards.

And perhaps they have.

I was a CCA member for many years, going back to the mid or late aughts….I forget which. CCA honchos Joey Berlin and John DeSimio ejected me last March for a spurious reason that boiled down to a matter of political cowardice (theirs) in the face of woke hysteria.

I explained the deal in a piece I posted three months ago called “Hester Prynne Has Nothing on Yours Truly.” I quoted another person’s viewpoint, and posted it for an hour, and those beasts shot me in the stomach for it. So I stated unequivocally what I believed nine or ten months ago and what I believe today in my heart, which is that Joey and John and the people who pressured them are bad people (as in cowardly, hysterical, unprincipled, swinish, venal).

During a climactic sequence in The Bridges of Toko-Ri, a North Korean grenade lands near William Holden and Mickey Rooney in a muddy trench. Rooney lunges and throws it away before it explodes. Then another grenade lands — Rooney does the same and is killed when it explodes in his hand. If you were in that trench with Joey Berlin or John DeSimio, they would grab the grenade and throw it in your direction. Then they would toss their weapons, drop to their knees and beg the North Koreans not to shoot them.

That’s not saying much in a town like Los Angeles, I realize, but there it is regardless.

Hollywood Elsewhere will catch an invitational screening of Steven Spielberg‘s West Side Story at the Bedford Playhouse on Thursday, 12.9. Blue-chip restoration guru Robert Harris oversaw the technical projection and sound quality at this recently recreated cinema (633 Old Post Rd, Bedford, NY 10506), so it’s a safe bet that this screening will be as good as the one I caught at Manhattan’s SVA theatre a week ago.

Which reminds me: There’s no other award-season film out there that delivers as fully as West Side Story does. Emotionally, I mean. So because my eyes welled up three or four times, it’s more than likely that WSS will take the 2021 Best Picture Oscar. Yes, 59 years after the previous version, directed by Robert Wise and Jerome Robbins, won the exact same prize.

I know everyone (myself included) said over and over that one West Side Story Best Picture Oscar was sufficient and that history doesn’t need to repeat itself and that it’s better to hand the big prize to another deserving film (but not The Power of the Dog — Jane Campion‘s Best Director Oscar is safe but that’s it). But I don’t see any way around a WSS win at this point.

If I had any discipline, I would’ve streamed Ryusuke Hamaguchi‘s Drive My Car by now. But the 179-minute length kept giving me pause. Now that it’s won the New York Film Critics Circle award for Best Picture, I feel an extra urgency to just sit the fuck down and watch it.

I’ve decided to catch it tomorrow afternoon at the Film Forum (3:50 pm) after lunching at Shuka (38 MacDougal St., south of Houston) with SBIFF honcho Roger Durling.

The HE community is hereby requested to post whatever Drive My Car impressions may be rattling around.