Early this afternoon I was in Le Petit Four, the longstanding Sunset Strip eatery. I was meeting with a couple of guys about a restoration of a classic ’50s film (can’t divulge specifics until next month), and about halfway through our chat Bill Maher, accompanied by a youngish Snow White-resembling brunette, walked in from the rear entrance. I caught his eye or he caught mine, and we exchanged a hint of alpha. He and Snow White sat in the inside rear area, maybe 15 or 20 feet from our table.

I’m not the hyperventilating sort who reflexively greets a celebrity if we happen to find ourselves in the same space. But I am quite the fan of Real Time with Bill Maher and yesterday I had seriously enjoyed listening to Maher’s “Sunday special” chat with The Wire‘s Ben Shapiro, and we did have a semblance of an email relationship about 20 years ago (just after Politically Incorrect was yanked over Bill’s “9/11 wackos were not cowards” line), and I was invited to fly to Las Vegas around the same time to catch his show, etc. And we did chat at a private party or two around that time.

So I felt there was an ever-so-slight basis to maybe walk over and offer a quick “yo” and duck out.

But as I was mulling this over, I was contemplating Bill’s “normcore” outfit — dark green-plaid shirt, black baseball cap, dark jeans, black athletic shoes. And I have to say that as one New Jersey guy contemplating another (Bill grew up in River Vale, and I was mostly raised in Westfield), I was vaguely….uhm, taken aback?

Anyone can wear anything they damn well please on a Sunday afternoon, of course, and it’s none of my damn business to criticize someone who happens to be in a normcore mood…please. The polite thing to do right now, I realize, is to sidestep the issue and move the fuck on. I was just a wee bit surprised, is all. I’ve always thought of Maher as an East Coast uptown guy with sartorial inclinations not that different than my own.

Anyway I decided to throw caution to the wind and walk over for a quick hello. Right away I sensed this was a bad idea. I mentioned that I’d listened to the Shapiro chat while driving home from Santa Barbara yesterday, but for some reason I couldn’t remember Shapiro’s name (weird). I was nervous and choking. I knew right away that I had erred because Bill didn’t say a word — he just gazed at me like I was a tree or a gas pump. I thought for a split second that he might be ripped or even tripping on something — his facial expression reminded me of that red-haired kid (Aaron Wolf) who was stoned during his Bar Mitzvah in Joel and Ethan Coen‘s A Serious Man. The same message was flashing over and over…”get outta there, get outta there, get outta there.”

This is why it’s better to just stay in your own corner. I guess this is a kind of follow-up to the “not talking with David O. Russell in Santa Barbara” story from a couple of nights ago.

I’m watching the Critics Choice Awards right now and thinking, “This is a nightmare…we’re all immersed in a benign, thumbs-up, positive-energy horror film…the seed pod wokey-wokes are everywhere and too terrified to think, comment or behave otherwise, and only a few of us have escaped the takeover syndrome — playing it cautiously out of fear of being called out, and yet thinking and assessing like semi-free human beings and secretly sharing un-woke thoughts.

We’re in the middle of a cultural-racialist-genderist revolution and a general consensus that bad white guys need to sit in the back of the bus for a few years, and as long as the revolutionary wheels are churning and crunching and filling the air with aspirational social fables, Hollywood will continue to grapple with the fact that for many in the industry, streaming and theatrical movies will serve the cause of enlightened social propaganda. 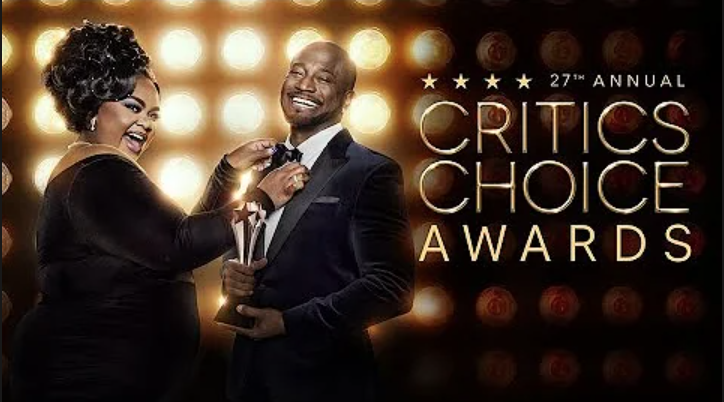 Friendo who’s also watching: “Ugh…Ariana DeBose says ‘no matter how you identify you are unique you are smart you are talented just as you are.’ Isn’t that the problem? This is what we have done to an entire generation — this is how they see the world…that they are special and each of them must be recognized.”

Originally posted on 1.8.18…more than four years ago:

Now it’s time for a fifth involving the installation of seed-pod mindsets, with the change agents being the Millennial and Generation Z sons and daughters of today.

I’m talking about a scenario in which the Anglo Saxon whitebread gene is regarded as inherently arrogant, criminal and bad for the planet — flawed, cruel, heartless, exploitive. A consensus emerges that the only way to correct this abhorrent culture is to fully indict the historical criminality of whiteness over several decades and in fact back to the beginnings of this nation — what it’s been, what it is now and where it’ll lead if things aren’t turned around.

Alien spores float down from space, affecting only the children and grandchildren of boomers and GenXers. Once turned, the awoken are free to call Anglo-Saxon culture by it’s true name — oppressor, a cancer, a scourge upon humanity. Within days the idea is spread that it’s time for enlightened non-whites to marginalize or dilute or even overthrow white culture so that POC culture can re-shape things and bring in a little fresh air and more fairness, freedom and opportunity.

Gradually seed-pod consciousness spreads to members of the liberal intelligentsia, and more and more of them are suddenly embracing the program. The general idea is “let those shitty old crusty white guys eat some of the shit that POCs have been eating for the last couple of centuries,” etc.

Gradually it becomes accepted that if you’re white and straight you’re kind of a bad person, or at the very least suspect. And that you probably need to re-educate yourself and embrace the new reality…or else.

A clever horror-comedy satire that ten years ago would have come and gone and been forgotten by awards season is transformed by seed-podders into a Best Picture contender, and those who question the validity of this are regarded as cranks or closet racists.

Friends and family members of seed-pod film critics begin to notice a certain robotic manner and a glassy, out-to-lunch look in their eyes.

Liberal-minded film critics Anne Thompson and Eric Kohn declare that they’ve been making sure that POCs are ranked prominently in their year-end awards ballot, partly because they admire their films but also because they’re about or were made by POCs.

Hurtin’ After-Thoughts
Broadcast News opened in December 1987 -- call it 35 years ago. Back when William Hurt...the masterful Hurt!...was nearing the end of his glorious groove phase. Login with Patreon to view this post
March 13, 2022 4:19 pmby Jeffrey Wells

[Sasha here again – yes, Jeff is fine but occupied at the moment] Hurt is fantastic in Lawrence Kasdan’s Body Heat, in which he plays a hapless lawyer in over his head:

[This is actually Sasha Stone posting for Jeff, who is not at his desk at the moment]

Netflix Dominated Awards Weekend, with Jane Campion winning at the DGA, Mitchells and the Machines winning at the Annies and the Power of the Dog topping the BAFTAS, though Dune won the most with five BAFTAs. While Nomadland won Picture and Director last year before going on to win at the Oscars, their recent track record for Best Picture in the era of the expanded ballot hasn’t been that great:


CODA was a bit of an upset in the Adapted Screenplay category and Licorice Pizza won for Original Screenplay. Will Smith took Best Actor and in the Best Actress category, Joanna Scanlon won for After Love (none of the committee-selected Best Actress contenders were nominated for the Oscar).

The Critics Choice is the next awards show of the weekend, which will be held this evening.

Here are the BAFTA winners:

BEST PICTURE
The Power of the Dog

DIRECTOR
The Power Of The Dog – Jane Campion

FILM NOT IN THE ENGLISH LANGUAGE
Drive My Car – Ryûsuke Hamaguchi, Teruhisa Yamamoto