Prior to its Toronto Film Festival debut, Apple’s plan for Peter Farrelly’s The Greatest Beer Run Ever (Apple) was to open theatrically on Friday, 9.30 and begin streaming a week later (10.7). But just before it got hammered by Toronto critics, Apple moved everything up a week.

Curious as it may seem, Beer Run is opening today in New York but without an all-media screening preceding this booking. (Which never happens.) And yet Apple has arranged for an all-media Manhattan screening on Thursday, 9.29 — one day before the Apple streaming begins.

For what it’s worth, I’ve never in my life heard of an all-media screening that happens a week after a film has opened theatrically. Or, for that matter, only a day before it begins streaming.

Intrigued, I’m on my way into the city to catch a 5 pm screening of Beer Run at the Union Square Regal. Yes, right now.

We all understand a lot of critics had it in for Peter and this movie before they saw it. They hated Green Book four years ago, and now they’re delivering payback for it having won the Best Picture Oscar. Whatever the actual merits of Beer Run, these folks were locked into hate mode.

The Wikipedia age still says Beer Run “will be released in select theaters and on Apple TV+ on September 30, 2022.” Time for an update! 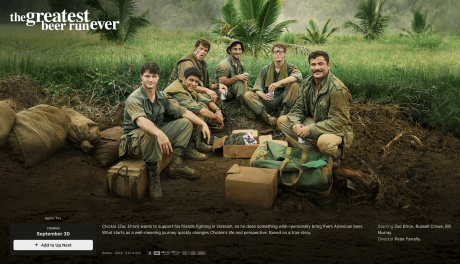 Sasha Stone on Bardo: “In my opinion, Bardo [will probably] work best as a stoner movie, like 2001 was once upon a time. Get baked, trip out. I think if you are coming from the perspective of a film critic and you’re trying to string together some sort of plot or meaning you will find fault with the film itself, rather than shifting your perspective ever so slightly and making an effort to see where Inarritu is coming from. I don’t know, just a suggestion.”

The release of Ignite Films’ 4K UHD Bluray restoration of William Cameron Menzies‘ Invaders From Mars (’53) has been delayed. It was announced months ago that the loaded Mars package would ship on Monday, 9.26, or four days hence. I don’t know what may have caused the delay, nor have I been told what the new release date is. One presumes it won’t be too far in the future. 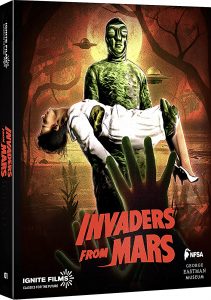 Vietnam veteran John Kerry, best known as Barack Obama‘s Secretary of State (2013 to 2017), a Massachusetts U.S. Senator from ’85 through ’13 and Democratic nominee for President in ’04, has weighed in on The Greatest Beer Run Ever (Apple, 9.30) in the pages of the Boston Globe.

For what it’s worth, this may be the first time Kerry has publicly opined on a motion picture…ever.

As Peter Farrelly’s currently playing film is one of the first Hollywood movies set entirely during the Vietnam War in many many years, Kerry saw Beer Run early and took an immediate liking. He’s actually seen it twice, I’m told.

Kerry: “[I’m] reminded of the story of a forgotten Marine in the iconic photo of the flag-raisers over Iwo Jima, the one with his back to the camera. He had been killed in action the very next day, and no one ever told this young man’s grieving mother that her son was the one leaning over and planting the pole on the top of Mount Suribachi. Not until a down-on-his-luck, unhappy Ira Hayes shook himself upright, hitchhiked from Arizona to Texas, found his buddy’s mother and informed her that her son was a great man who’d never be forgotten.

“Like Chickie Donohue’s gesture to the mother of his fallen friend, these are wartime reminders of bonds that endure beyond the battlefield.

“The Greatest Beer Run Ever doesn’t challenge viewers like Oliver Stone’s Platoon or Stanley Kubrick’s Full Metal Jacket. It doesn’t have to do that. Its power is bringing to life people and places that anyone who has served in uniform, or grown up in a neighborhood or community defined by loyalty and friendship can relate to — and reminding us that we often can rediscover those bonds in the hardest of circumstances.

“That was one of the realities of Vietnam, where young men put their lives in each other’s hands, and, regardless of where they came from or where they were headed, created lifelong ties as enduring as any built on the streets of Chickie’s Inwood. For those of us of the Vietnam generation, the film is a poignant reminder that, whatever we did in that time and whatever our political perspective, how we experienced Vietnam is inextricably intertwined with who we experienced it with.

“But for all of us, the film can serve as a reminder that even in times of great division and conflict, hopefully we can find common ground; if not, at least we can find our common humanity. Learning that lesson hopefully does not demand that we travel thousands of miles from home as Chickie had to, but that we can find that spirit right here at home, again.”

Nine months after the Sundance ’22 debut, Kathryn Ferguson‘s Nothing Compares — a doc that I totally flipped over — will receive an awards-qualifying theatrical run on Friday, 9.23. At Manhattan’s Cinema Village and L.A.’s Laemmle Monica Film Center.

The 95-minute film will then stream for Showtime subscribers on Friday, September 30, followed by on-air premiere set for Showtime on Sunday, October 2.

“Sinead O’Connor’s Beautiful Scream.” posted on 1.28.22: During her ascendant, hot-rocket period (’85 to ’92), Sinead O’Connor was one of the greatest rockers ever — a ballsy poet, provocateur, wailer, screecher, torch carrier…a woman with a voice that mixed exquisite style and control with primal pain. She was / is magnificent. I still listen to The Lion and the Cobra and I Do Not Want What I Haven’t Got, and I still love “Madinka”, “Jerusalem”, “Troy” and “Nothing Compares 2 U”…all of it, the primal energy, the shifting pitch of her voice, the Irish punk banshee thing…wow.

It doesn’t matter that this happened 30 to 35 years ago, and that O’Connor has lived a convulsive, ebb-and-flow life ever since…one torrential spew or tussle or throw-down after another…or that she now performs in Muslim robes (having converted two or three years ago)…what matters is that from age 19 through 26, or for roughly eight years, O’Connor was a blazing art-rocker of the first order and an unstoppable historic force…like Bob Dylan was between ’61 and the motorcycle accident + Blonde on Blonde crescendo of ’66.

Kathryn Ferguson’s Nothing Compares, a 96-minute doc that I saw late yesterday afternoon, is mainly about O’Connor’s rise, peak and fall over that eight-year period. (The last 30 years are acknowledged but mainly in the credit crawl.) Sinead’s climactic crisis, of course, was that infamous mass rejection that followed her defiant “tearing up the Pope photo” performance on a 10.3.92 airing of Saturday Night Live, which then was followed by the booing she received at a Dylan 30th Anniversary tribute concert in Madison Square Garden about two weeks later.

She never recovered the magic mojo.

What does Dave Bautista, of all people, have to do with the apocalypse? Or Jonathan Groff, for that matter? I know the film is based on Paul Tremblay‘s “The Cabin at the End of the World” but I smell a flimsy Shyamalan premise.

I’ve seen Alejandro G. Inarritu‘s Bardo, you bet. It’s a Fellini-esque dreamscape, a meal-and-a-half and quite the ride. I’ve “let it in” and thought it through and digested it as best I can, and I’m telling you that this new Bardo trailer — a haunting, wordless, perfectly-timed, dead-brilliant merging with John Lennon‘s “I Am The Walrus” — is fucking perfect.

It’s almost as if an unmurdered Lennon was hired by Inarritu to score the trailer, and this is what he composed.

Here’s my Telluride review, except Inarritu has now removed 22 minutes (it was 174 minutes in Telluride — now it’s 152) and may fiddle around even more before the U.S. release date. Just watch it and let it sink in.