Serial killer sagas have always been hot tickets. I’ve liked exactly five — Manhunter, Mindhunter, The Silence of the Lambs, Se7en and Zodiac — but then I’m an outlier.

Jett and Cait are big fans of serial killer “product.” Netflix’s idiotically titled Dahmer — Monster: The Jeffrey Dahmer Story is “the ninth most popular English-language TV show of all time, with 56 million households having viewed all 10 episodes.” Against my better judgment I watched three or four episodes…later.

A friend had told me that The Good Nurse, a stand-alone, fact-based drama about the hospital serial killer Charles Cullen, was quite good so I caught it the other night in Manhattan. I was underwhelmed. Mystified even. It’s one of those films that you manage to endure. It’s certainly nothing to write home about. I began losing patience around the 40-minute mark, and then I was stuck for another 80.

It’s one of the darkest and dreariest looking films I’ve seen in ages (obviously intentional and quite the contrast as the dp, Jody Lee Lipes, shot Trainwreck and Manchester By The Sea).

All through it I was asking myself “who could possibly care about this glum, plodding little film?” The answer, of course, is that tens of millions will become instant fans, no matter how flat or slow it is. Simply because Cullen (Eddie Redmayne) murdered at least 40 hospital patients and perhaps hundreds of others with injections of insulin and dejoxin, etc. That’s all they care about.

Redmayne’s Cullen is a kind of soft-voiced, good-natured dolt…dullness incarnate until the very end. Jessica Chastain is Amy Loughren, a nurse who’d been fairly friendly with Cullen but later helped detectives get the goods on him.

A friend called The Good Nurse “Fincheresque” but David Fincher would never direct a film this dull.

By the way, what other film set in a hospital focused on an unstable man who surreptitiously kills patients with overdoses of insulin and dijoxin? Paddy Chayefsky’s The Hospital (‘71).

Friendo #2: “Although it might have been taking artistic license, if I had been brought in to punch up The Good Nurse I would have suggested the following: Chastain’s character agrees to help the police only because she’s convinced Redmayne is innocent and wants to prove it to them. She’s then doubly horrified to learn the truth.”

On 10.11 I passed along some positive reactions to Martin McDonagh’s The Banshees of Inisherin (Searchlight, 10.21), and quoted a critic friendo who’d been told by a couple of eccentric colleagues that Banshees might win the Best Picture Oscar…”people adore this film.”

This prompted another critic friendo to pass along the following:

“In some respects a lovely metaphorical lament about Irish anguish and turbulence and the general impermanence of things, and fortified by excellent dialogue, fine acting (especially by Colin Farrell and Kerry Condon), handsome cinematography and so on, but in other respects a bizarre, brutal thing that struck me as borderline diseased.

“You were right — the New York people who said that The Banshees of Inisherin might win the Best Picture Oscar are out of their fecking minds….INSANE.

“There were three or four sane characters in that film, Farrell’s Paddy Súilleabháin (at least initially) and Condon’s Siobhan (i.e., Farrell’s sister) being the sanest. Certain measures of rational behavior are also noticable from, I suppose, Sheila Flitton’s old crone, Pat Shortt’s bartender and one or two others.

“But Brendan Gleeson’s Colm Doherty and the mad priest and the belligerent cop and Barry Keohgan’s local loon (a counterpart to John Mills’ village idiot in Ryan’s Daughter, which also occurs in a rural Irish seaside village roughly a century ago), are all lunatics of one kind or another.

“It’s a film about rage and nihilism and futility and banality and bloody finger stumps.

The “rage against the Supremes killing Roe” bump is apparently subsiding. Biden’s bad numbers are returning; ditto projections about likely Republican gains. I modestly, half-heartedly approve of Joe’s job performance save for his kowtowing to the wokester wing. But the fact is that something awful might happen if he runs again. A younger, credible and compelling left-centrist Democrat has to primary him.

Patti Lupone recently said that B’way ticket prices are “insane.” I knew they were painful but it’s been a few years since I actually pondered (i.e., fantasized about) a purchase. I also presumed Lupone had turned on the hyperbole spigot. Then I looked at prices for Tom Stoppard’s Leopoldstadt. Okay, Telecharge isn’t as punishing. 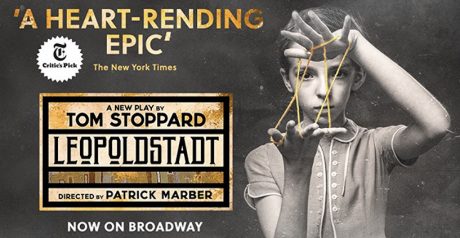