“Opposite of Crowd Pleaser”

On 10.11 I passed along some positive reactions to Martin McDonagh’s The Banshees of Inisherin (Searchlight, 10.21), and quoted a critic friendo who’d been told by a couple of eccentric colleagues that Banshees might win the Best Picture Oscar…”people adore this film.”

This prompted another critic friendo to pass along the following:

“In some respects a lovely metaphorical lament about Irish anguish and turbulence and the general impermanence of things, and fortified by excellent dialogue, fine acting (especially by Colin Farrell and Kerry Condon), handsome cinematography and so on, but in other respects a bizarre, brutal thing that struck me as borderline diseased.

“You were right — the New York people who said that The Banshees of Inisherin might win the Best Picture Oscar are out of their fecking minds….INSANE.

“There were three or four sane characters in that film, Farrell’s Paddy Súilleabháin (at least initially) and Condon’s Siobhan (i.e., Farrell’s sister) being the sanest. Certain measures of rational behavior are also noticable from, I suppose, Sheila Flitton’s old crone, Pat Shortt’s bartender and one or two others.

“But Brendan Gleeson’s Colm Doherty and the mad priest and the belligerent cop and Barry Keohgan’s local loon (a counterpart to John Mills’ village idiot in Ryan’s Daughter, which also occurs in a rural Irish seaside village roughly a century ago), are all lunatics of one kind or another.

“It’s a film about rage and nihilism and futility and banality and bloody finger stumps. 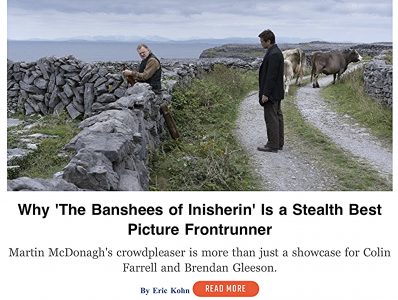 “It reminded me of a previous McDonagh black comedy about a severed body part, A Behanding in Spokane, which I saw on Broadway with Chris Walken. A delicious show, 10 or 15 times more engaging than Banshees.

“Farrell’s Paddy goes from dull and clueless to despairing to angry, obstinate, self-destructive and hollowed out.

“McDonagh obviously knows how to write dialogue with flavor and humanity and the actors are all fine (Farrell and Condon especially) and the island location is to-die-for and very nicely lighted and framed, but it’s mostly for naught in my book.

“If those people my NYC friend spoke to choose to like or love it for whatever reason, fine — they’re entitled to their opinions and it’s a free country. But if they actually said they believe it could win Best Picture, then they are flat–out crazy.

“It’s a nihilistic flatliner if I ever saw one. I’ve always regarded the notion of silence as hallowed and holy, but Banshees almost made me despise it.

“McDonagh’s metaphor amounted to urination. I felt as if he was pissing on my chest and lap.

“A woman next to me was chuckling all through it. I finally turned and looked at her with annoyance.”

“I didn’t understand some of the Banshees dialogue, but I got most of it or enough of it. Then again I’m occasionally kinda depressed like Brendan or Colin so maybe when I get back to Wilton I should chop one of my toes off, or all five of them. Or my left foot. Maybe I should kill one of my cats while I’m at it. Maybe I should drive my car into a ditch and set in on fire.”