Kaitlin Dever, playing Clooney and Roberts’ daughter, still doesn’t resemble either of them even slightly. You can almost set your watch by mainstream Hollywood’s refusal to cast younger actors who bear even a FAINT resemblance to the older actors they’re supposed to be the sons or daughters of. Plus the shrimp-sized Dever (5’2″) is way too short to be the daughter of Clooney and Roberts (5’11 and 5’8″ respectively). I’m sorry but tallish parents almost never produce Hobbitt-sized children. 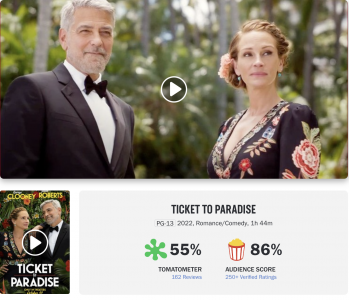 And for what it’s worth if I’d just graduated from law school (which Dever’s character does as the film begins) I would never, ever decide to marry a guy who works as a Balinese seaweed farmer. At the very least I would make sure I could practice English-language law in Bali, and if that wasn’t an option then I just wouldn’t marry the guy…period.

Have I mentioned that I hated Mr. Mellow Seaweed (Maxime Bouttier) and especially his hideously serene and cheerful family? Well, I did. I loathed everyone in this film, in fact, and particularly Lucas Bravo as Roberts’ 35 year-old boyfriend who actually gets down on his knees to propose to 55 year-old Roberts…embarassing!

Plus I hated the couple sitting next to me, and more particularly the guy who ate three courses of food (including a fries-and-gravy dish…slurp!…slurp!) and who had to discuss every turn of the plot with the wife-girlfriend. It never occured to either of these animals so simply watch the film without commentary. Did I give them the HE stink-eye? I should have but I wimped out. I didn’t care so I just left.

Every seat in the theatre was filled, and a terrible psychic weight dissolved into thin air when I finally summoned the resolve to get the hell out of there.

Instant Approval
The last time I paid close attention to Jake Hoffman (born 41 years ago, son of 85 year-old Dustin) was when he did a cameo as Steve Madden in The Wolf of Wall Street. Now I'm looking and listening again, this time at a trailer for Same & Kate (Vertical, 11.11), obviously a light and harmless four-way relationship thing costarring Jake, Dustin, Sissy Spacek and Schuyler Fisk (Sissy's daughter). And you know what? Jake has a nice-sounding voice and a steady planted vibe -- my immediate response was one of approval. I trust him.

I realize that Congressperson Val Demings has been behind Sen. Marco Rubio all along in the polls. A new pool from Florida Atlantic University shows Rubio leading Demings by 6 points, 48 percent to 42 percent.

That said, Demings came off as a better debater, and I believe she’s a better human being. Nobody laughed at her during the debate, but they laughed their ass off at Rubio when he lied about his former position on the 2020 election.

“Four Takeaways From the Rubio-Demings Debate in Florida’s Senate Race,” reported on 10.18 by Lisa Lerer and Maggie Astor for the N.Y. Times:

“Senator Marco Rubio of Florida and his Democratic challenger, Representative Val Demings, met for the only debate of the Florida Senate race on Tuesday, a fast-paced, fiery face-off that cruised through a series of the top issues affecting the country and the state.

“Mr. Rubio, who participated in around a dozen debates as a Republican presidential candidate in 2016, was polished and quick. Taking a more evocative approach, Ms. Demings sought to cast him as heartless, disconnected from the human impact of his policies on issues like abortion and guns.

“Still, she may not have gotten the kind of viral moment necessary to shift the trajectory of the race in her favor. For months, polls have shown Mr. Rubio with a lead in Florida, a perennial battleground state but one that has shifted to the right.”

Criterion In Wobbly Place
Three days ago Criterion laid off 16 staffers, or roughly 20% of its 80-person workforce. Peter Becker called it a “reorganization” brought about by new “challenges and opportunities." What he meant is that Criterion income has been shrinking and they have no choice but to cut back on expenses. The home-video world is changing. Physical media is dying and streaming is king. And Criterion's film-snob appeal isn't what it used to be. Hell, they're still dragging their feet in the matter of 4K Blurays.

True story: A reputable critic was seated at a dinner table during a wedding reception (let’s presume it was sometime in the ’90s or early aughts), and noticed that producer Mace Neufeld was a tablemate. After being introduced, Neufeld (who passed last January) had one…make that two questions for the critic. Neufeld question #1: ”Do you know Manohla Dargis?” The critic said yeah, he did. Neufeld question #2: “What’s the deal with that broad?”

Upon being questioned by Lydia, Max declares that “as a BIPOC pangender person” he’s not “into” Johann Sebastian Bach, due to the 18th Century composer having been (a) white, (b) privileged and (c) a bit of a sociopath in his youth.

The instant Max says this, the viewer understands what a tyrannical little bitch he is — a Zoomer willing to throw the baby out with the bathwater because a gifted artist’s behavior was imperfect or even abusive.

Others (including, I presume, Tar director Todd Field) see things differently. In a fair-minded world the unfortunate shortcomings of a genius artist (like, say, the predatory Roman Polanski of the ’70s and ’80s) wouldn’t be disqualifying when it comes to assessing his/her work. The presence of profound talent, mind, doesn’t mean that sexually voracious or manipulative behavior warrants an automatic “get out of jail” card. But given the historical record, it should, I feel, be regarded with a less-damning perspective. I mean, we certainly don’t want the Max brigade to be calling the shots…good heavens.

In Michelle Goldberg‘s 10.21 N.Y. Tines essay about Tar (“Finally, a Great Movie About Cancel Culture“), she writes that “the notion of separating the art from the artist has gone out of fashion,” at least among Millennials and Zoomers. Over-45 types, she notes, “have complicated and contradictory feelings about the rapid changes in values, manners and allowances that fall under the rubric of cancel culture.”

In my case, these feelings can be fairly described as disgusted and appalled. But then you knew that.

I’m prodded by a 12.21 story posted yesterday by World of Reel‘s Jordan Ruimy. It concerns a Max-like critic (presumably younger but who knows?) who recently voted in the once-a-decade Sight & Sound poll about the Greatest Films of All Time The critic, an East Coast IndieWire person and quite possibly a woman (though not necessarily), recently told a film producer that he/she had refused to vote for any Alfred Hitchcock film because of his sexual “predator” rep, earned by well-sourced accounts of his behavior with Tippi Hedren during the filming of The Birds and Marnie.

How many Max-ian critics are part of the current Sight & Sound fraternity, which has, I gather, recently expanded its ranks with certain Millennial and Zoomer contributors? Are there enough Hitchcock haters to unseat his masterful Vertigo (’58), which pushed aside Citizen Kane in the last Greatest of All Time poll in 2012? (Vertigo didn’t even appear in the S&S poll until 1982, when it came in seventh. It ranked fourth in ’92, and then second in ’02 polling,) A critic friend says he’s “sure that Hitchcock is safe overall,” but a voice is telling me that the Max factor may topple Vertigo.

Condon is The Keeper
HE believes that Kerry Condon, who plays the sensible but distraught Siobhan (the sister of Colin Farrell's Paddy) in The Banshees of Inisherin, has given the most grounded and formidable supporting actress performance so far this year.