“Everybody’s Daddy”
It goes without saying that Sea of Love ('89), a sexually charged Manhattan noir + Al Pacino's comeback film after the colossal misfortune of Hugh Hudson's Revolution, would never be made today. Login with Patreon to view this post
January 24, 2023 1:05 pmby Jeff Wells
108 Comments
Life Is Unfair — Get Over It 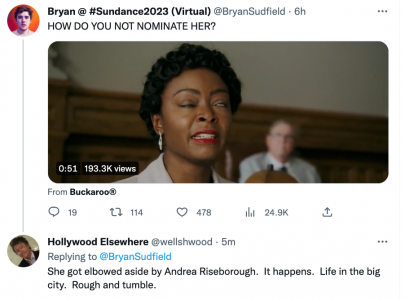 “Rockin’ In The Projects”
The late, great Warren Zevon was born exactly 76 years ago today (1.24.47). Like everyone else I've adored his third album, Excitable Boy, since it first came out on 1.18.78, when he was about to turn 31. Of all the great songs on that magnificent and pungent album, I've always found "When Johnny Strikes Up The Band" the richest and friendliest...the most inviting, the most melodic and complex...a lifelong keeper. I also thought back then that "Lawyers, Guns & Money" was my personal theme song, particularly "dad, get me outta this." Login with Patreon to view this post
January 24, 2023 12:21 pmby Jeff Wells
12 Comments
Fathering Can Be A Bitch

Two days ago I caught The Son (Sony Pictures Classics, 1.20), which I found well-written, well-acted and somewhat arduous to watch. Which doesn’t mean it’s a bad film — it’s just a bit of a thing to get through. Not a slog, which has negative connotations, but somewhat burdensome.

My mp3 review lasta around 12 minutes.

Why “All Quiet” Seems Like Best Picture Frontrunner
I've just verbalized some reactions to this morning's Oscar nominations. Click the arrow below -- 20 minutes, give or take. Login with Patreon to view this post
January 24, 2023 8:53 amby Jeff Wells

Hollywood Elsewhere is extremely bummed that Everything Everywhere All at Once nabbed 11 Oscar nominations this morning. Congrats, however, to Martin McDonagh‘s The Banshees of Inisherin and Edward Berger‘s All Quiet on the Western Front, which took nine noms each.

Given that All Quiet landed so many noms without much promotional help from Netflix, it seems to be the Best Picture frontrunner. Will Netflix finally start promoting it? Or will they continue to sit on their hands?

Especially given the negative responses to EEAAO from the over-45 crowd, and given the bloody finger stump residue from Banshees.

All Quiet is not an easy sit, but it’s obviously a compassionate, humanistic film at the end of the day.

9:17 am tally: Best Picture — All Quiet on the Western Front, Avatar: The Way of Water, The Banshees of Inisherin, Elvis, Everything Everywhere All at Once, The Fabelmans, Tar, Top Gun: Maverick, Triangle of Sadness, Women Talking.

8:32 am: Wait…Best Supporting Actress nominees include Jamie Lee Curtis and Stephanie Hsu, both from Everything Everywhere All At Once? Bad sign. Very bad sign.

Against all odds, Women Talking managed to get nominated for Best Picture. Not a prayer of winning, of course. But at least saved from being snubbed.

Decision to Leave snubbed in Best Int’l Feature category…admired the chops, didn’t like the film, fine with me.

Director friendo: Netflix totally blew it with All Quiet on the Western Front. No campaign. I know many directors who were unaware that the film even existed.
HE: But it was nominated for Best Picture and five or six other Oscars….right?
Director friendo: Yes. Nine. But no Best Director nomination for Edward Berger. It can still win Best Picture if only Netflix would mount a campaign.
HE: Netflix was strangely reticent with this film. Odd.
Director friendo: More than reticent. Neglectful. It scored 9 noms with no Netflix suppoprt. What does that tell you?

The 95th Oscars will happen at the Dolby Theatre on Sunday, March 12. Jimmy Kimmel will host. 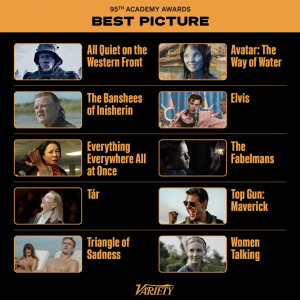 Tom Joad Comment on Sandaled Manfeet
It's been an HE cliche for several years that I will never accept, much less forgive, older dudes shuffling around in mandals or even, God forbid, barefoot. In the old days men wore lace-up tennis shoes or slip-ons. There are very few things in the public arena that are more odious than man toes, and yet millions of older American males are staunchly defiant in this regard, sometimes to the extent of wearing mandals in hotel breakfast rooms. Login with Patreon to view this post
January 24, 2023 5:09 amby Jeff Wells
13 Comments
Sam and Andrew

In a 1.23 World of Reel post that riffs on a 1.13.22 Daily Mail interview, Empire of Light director-writer Sam Mendes laments the bombing or under-performing of not only his own film** but other auteur-stamped features that opened during 2022’s award season.

The comment thread that follows is fascinating, but I was particularly stirred by a post from “Andrew”, who compares the Miramax-dominated realm of 1998 (when well-educated boomers and GenXers were avid followers of critically-approved award-season flicks) to the coarse downmarket reality of today.

** Empire of Light is HE’s choice for the best film of 2022. And I’m far from alone in my admiration.