With Sofia Coppola‘s The Bling Ring opening stateside on Friday, 2.14, I’m re-posting my Cannes Film Festival review from roughly three weeks ago: “There’s a self reflecting, shallow pool, empty-hall-of-mirrors vibe delivered by Sofia Coppola‘s The Bling Ring. I don’t know what could’ve resulted from a film about fame-worship and malignant materialism, but don’t we know about the yield of shallowness going in? Aren’t the urban GenY kids who live for some kind of nocturnal proximity to the vapidly famous…aren’t they self-parodying to begin with? Weren’t the actual Bling Ring kids extremely self-mocking before they were even caught? 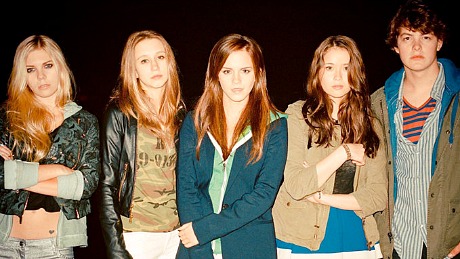 “What then can a film like The Bling Ring possibly add to the conversation? How can you deepen a subject that is flagrantly shallow? I was mulling this over all through it.

“Coppola’s film is a lean, unpretentious, well-cut, vapidly glamorous crime flick that is so neutrally non-judgmental about the criminals — a posse of six or seven teens from L.A.’s West Valley who famously robbed several celebrity-owned homes between October 2008 and August 2009, including ones belonging to Paris Hilton, Lindsay Lohan, Megan Fox, Rachel Bilson, Audrina Patridge and Orlando Bloom — and so uninterested is getting inside the perpetrators’ hearts and heads that nothing is left, really, except the facts. It’s basically a procedural with wry commentary slipped in here and there. Except a lot of the wry commentary was happening in my head.

“Another way to go is to call it a kind of blase, skin-deep film about a bunch of empty, spiritually poisoned sociopaths who have nothing (and I mean nothing) going on inside of any merit, so where can you go with a film like this? What is there to say? I know, it’s uncool for a director-writer to blatantly “say” something by making tedious moral points but….like I said, a hall of mirrors. Coppola’s approach brings almost nothing to the table except the cinematic virtues of being scrupulous and exacting and letting your subjects hang themselves. She hangs back and just watches, and now and then she winks very slightly at what a bunch of empty losers these kids are but…I don’t know, man. I get what it’s about and I know (or am presuming) where Coppola is coming from, but substantively it doesn’t amount to much. It can’t.

“Who robs the homes of the rich without considering the likelihood that you’re going to be identified by security cameras? Who wouldn’t realize this and wear masks as well as surgical gloves and plastic foot wrappings so you wouldn’t leave fingerprints and evidence traces? These kids didn’t. They were absolute idiots. If you’re going to be a thief, be a smart one.