I’ll be seeing Zack Snyder‘s Man of Steel at a Prague press screening on Thursday morning, 6.13, and will therefore be able to bang out a review before it opens Stateside the following day. So I’ll get into it soon enough, but for the time being I’m discounting all of the rave reviews from all of the geek-friendly critics and columnists who grew up in the ’80s…anyone who’s ever declared even a vague allegiance to the manipulations of superhero flicks. Just as I discounted last summer’s over-the-top Avengers huzzahs along with the South by Southwest raves for Cabin in the Woods. You can only listen to non-vested hard guys.

Steel is basically a dark Nolanesque take on the Supie legend — last night somebody called it “The Clark Knight.” A majority of reviewers are calling Man of Steel good or mostly satisfying but not great. Remove the geek-love deference factor and what this really means is that it’s probably not bad or fairly decent but not all that nutritional when you get right down to it. If you listen to Variety‘s Scott Foundas Steel is defined by a “humorless tone and relentlessly noisy (visually and sonically) aesthetics [that] leave much to be desired.” In the view of Indiewire critic Eric Kohn, it “takes a more self-serious approach, constructing a sullen tale [with a] dreary atmosphere [and a] brooding storyline.” And if you listen to David Poland, it more or less blows.

I asked Poland this morning (i.e., last night) if it fails to cut the mustard according to the Howard Hawks rule that all strong films have three great scenes and no bad ones. Poland said “it does” and that he will soon “go back to seek one great scene.”

I have no problem with Man of Steel earning a possible $100 million this weekend — fine, go to town, whatever. But you’re dealing with an audience that can’t get enough of comic book-superhero shite. A really good popcorn movie for the people has do that deep-theme, double-intelligent, heavy-lifting thing (like Captain America did) to attract skeptics and haters like myself. I don’t see this happening with Man of Steel but maybe, maybe. I’ll see it 36 hours hence and we’ll go from there. 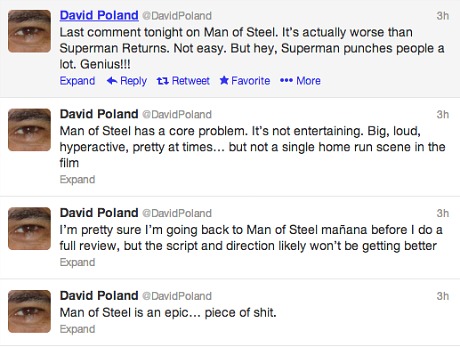 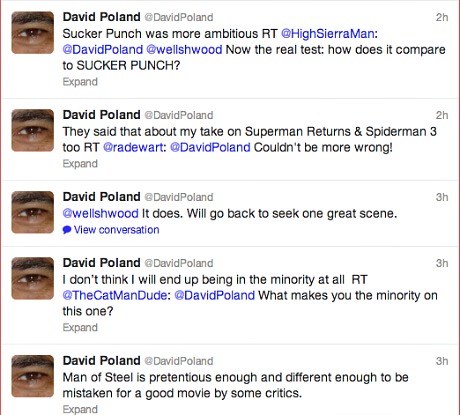