James Mangold‘s 3:10 to Yuma (Lionsgate, 9.7) is said to be a rough, rugged tale of the Old West — no CG, nothing slick, back to the cowpoke basics. Which is why this poster surprised me. It makes it look like a Bob Fosse western. The guy holding the two handguns has his head down like he’s waiting for a musical cue before going into a hot and slinky dance number. In fact, he could be Catherine Zeta Jones with her hair up. 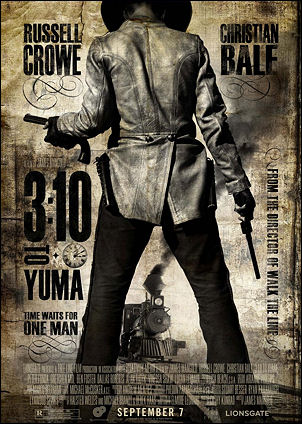 The Coming Soon guys had this poster first…okay?

“It looks too cool, too stylized,” says a guy who’s seen the film. “It doesn’t reflect the grittiness. It misses the mood of the film. The coat is too stylish-looking. I think it’s the buttons — the buttons are a problem.” Let’s just come out and say it — the jacket looks like it was bought at Bloomingdale’s. Or at Nudie’s on Lankershim. The guy who designed this poster was thinking more about winning a Hollywood Reporter Key Art award than selling the movie that Mangold has allegedly made. (I’m seeing it in early August.)