Survival At All Costs

American Hustle‘s Amy Adams is, I feel, a more deserving recipient of the Best Actress Oscar than Blue Jasmine‘s Cate Blanchett. Which doesn’t mean zip at this stage of the game. We all know which way the wind is blowing. Blanchett has had it in the bag for months, and anyone who would consider not voting for her because of recent assaults directed at Woody Allen…don’t even go there. Blanchett is blazingly good in this film. It’s just that I’m starting to see her performance as a bit too shrill and agitated and wobbly, and that it has only three or four shades — fearful, hysterical, morose, depressive. But Adams’ performance is nearly the exact opposite. She’s about tenacity and drive and experimentation, and is almost rainbow-like in her improvs and moodplays.

I’ve been carrying a DVD screener of David O. Russell‘s film with me, and two nights ago I watched it on my Macbook Pro. (This was my third time — the first two viewings were theatrical.) And something…this is going to sound odd because I haven’t said much about Hustle for the last couple of months, but something about Adams performance suddenly…expanded?

There’s something acting-classy about the angle-dangling of Sydney Prosser, a.k.a. “Lady Edith.” Something loose and brave and maybe a bit desperate. Perhaps too loose at times. A standard view is that American Hustle is about the eternal struggle to survive, and that conning people into thinking you’re up to something that you’re really not is a necessary skill, or so the legend goes. But being around constant liars can get toxic after a while. You need to come up for air. You need to plant your feet, look the other person in the eye and tell the truth. Once in a while, at least.

I’ll admit that I became a bit frustrated during my first viewing by Adams’ constant “performing” within the performance. The relentless con-jobbing, teasing, play-acting. Ditching Christian Bale when Bradley Cooper moves in, and then playing Cooper until Bale trumps with a last winning hand, etc. But Adams’ constant mood-shifting and shape-shifting is, at the end, a thrill and a turn-on. I never quite figured who Sydney really was but I sure as hell knew what Adams was up to by the end of the film, and that was dazzling the pants off anyone paying close attention. Russell clearly gave Adams the freedom to try a lot of different guises and moods during filming, and she ran with this like a thoroughbred. It took me weeks to come to this, but I’ve finally realized that Adams’ performance is simply more intriguing than Blanchett’s. More playful, colorful, explorational, surprising.

That moment when Jennifer Lawrence impulsively kisses Adams in the ladies room, for instance. “I don’t take credit for a lot of things,” Adams told Vulture‘s Kyle Buchanan, “but that was my idea. Maybe I just wanted to kiss Jennifer. She’s so cute!”

Sydney Prosser is deeply dedicated to “theatricality” (a euphemism for being a raving liar) as a way of life. Whatever rung she can grab, whomever she can ally herself with…anyone, anything. I’ve run into women like her from time to time. They’re often intelligent, always fiercely determined…but I’m not sure there’s any “there” there. What I love about Adams is that despite her lack of sincerity, she lights up the room when the name of the game is “pretend like your life depends on it.” Her bullshit feels vital and essential. Because she’s always “performing” on at least two or three levels at once.

Again, I find all this lying toxic and I can only take so much of it. But Adams has found a great creative partner in Russell and vice versa, and…what am I saying? I guess I’m pointing to a kind of leapfrog effect that bypasses the plot and the dialogue, almost, when they’re really jazzing with each other.

I love what MCN’s David Poland said about her performance a few weeks back: “There is not a second of doubt in Adams’ performance. There is not a moment in which she plays it too big…a moment when she disappears…a moment when you can’t read in her eyes either her truth or the truth her character is selling. She is a lion in this role. By the end of the film, it is only Sydney who has the brains, the guts, the nerve, and the magic of a wizard.”

When people say they’re voting for this actor or that performance, they’re basically voting for a character whom they like more than others. The interesting thing about Adams’ performance in Hustle is that I like her even though I don’t find Sydney Prosser especially likable, much less admirable. I’m just sinking into her energy and adaptability. That’s unusual for me. 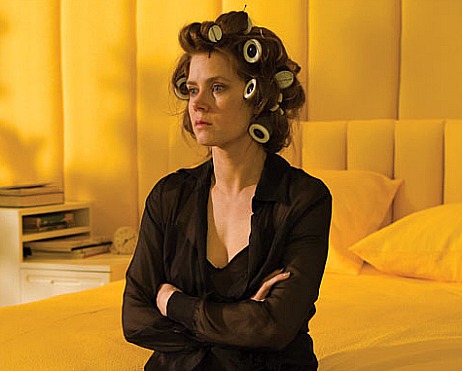