Love & Mercy is arguably the richest and most innovative musical biopic ever made. Really. Ever. And easily one of 2015’s best films. No debate. And when it was released…do I really have to explain that release dates should never mean a damn thing to anyone? Great is great, timeless is timeless.

Do I sound lecturing? Okay, maybe I do. But it’s time to re-charge the Love & Mercy award-season batteries and do a little soft-shoe schooling all the same. Time to dial it down and gently re-explain what a major mold-breaker and a deep-down thing this film is. It’s a musical-mystical-psychological biopic…too complex? Okay, it’s a “rescue me” love story and a journey into the ways of an unstable, heaven-touching genius that has pretty much levitated everyone who’s seen it and inspired more than just your basic thumbs-up reactions and…what, something closer to love? 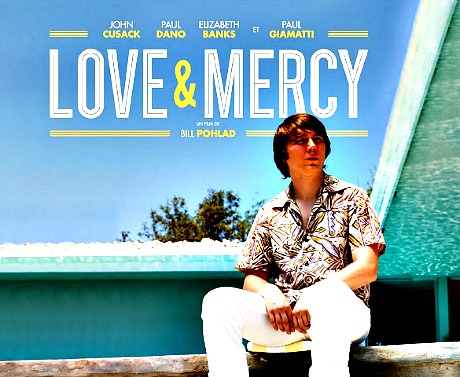 And yet a few prognosticating blowhards have continued to say that Love & Mercy is not a real award-season thing because it came out last June. Please! There are two phenomenal 2015 films that opened before Labor Day — Love & Mercy and Mad Max: Fury Road, and release dates couldn’t matter less. Oh, wait…they do matter. Because the award whisperers say so. Right.

Listen to this — the first dialogue you hear in the whole film. And then this. “Who are you, Mozart?” Yeah, Mike…exactly. How’d you figure that?

An Academy member I know wrote me after a Samuel Goldwyn screening and said Love & Mercy “is so unlike every other musical biopic ever made…there’s hardly a trope in it. Which may hurt it at the box-office in the end. No big set pieces, no moment where we discover ‘the singer can sing’, no final musical triumph. It’s so much deeper than that.”

People all over town who know from movies have spoken. People like Jane Fonda, Paul McCartney and Cameron Crowe swear by Love & Mercy. (Go ahead, ask them.) And the Movie Godz bestowed their blessings, of course, after those first 2014 Toronto Film Festival screenings. And all those California girls, man, in their French bikinis. 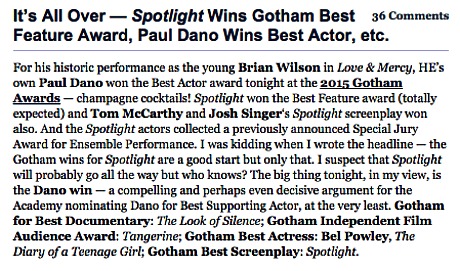 “There are so many things that went on in Brian’s life that were like, you’ve got to be kidding…nobody’s ever going to believe that. But with a lot of things in the movie, we didn’t want to back away from it or create something that was false. So we tried to make it as genuine as we could and to be straightforward about it and not back away.” — Love & Mercy director Bill Pohlad.

I went apeshit for Love and Mercy at the 2014 Toronto Film Festival (14 and 1/2 months ago), and particularly Paul Dano’s phenomenal performance as the younger version of Brian Wilson. And for John Cusack‘s portrayal of a 40-something Wilson in the ’80s portion. Seeing this film for the first time was a soul-opener…an earthquake thing in a delicate and vulnerable sort of way.

A couple of hours after my first viewing I wrote that “every year there’s a lead performance or two in an indie-level film that’s so drop-to-your-knees mesmerizing that people like myself throw back the shutters and shout ‘definitely award-worthy…make room!’ I’m telling you straight and true that Dano‘s performance as the youngish Brian Wilson is almost spookily great.”

Wilson’s disturbed spirit hums and throbs in the 30-year-old Dano, who gained 25 or 30 pounds to play the genius Beach Boy maestro in his mid ’60s blimp period. You can really feel the vibrations and sense the genius-level ferment and the off-balance emotionality. Inwardly and outwardly it’s a stunning, drop-dead transformation and the finest performance of Dano’s career, hands down.

Not to mention Cusack also as the 40ish Wilson in the same film, which shifts back and forth between the mid to late ’60s (i.e., the recording of Pet Sounds and Smile) and the mid to late ’80s (i.e., ‘the Landy years’). Cusack plays a gentle but very solemn and intimidated Wilson during the period in which he was under the firm hand of the disreputable Eugene Landy, who died in 2006. Cusack is child-like and Gentle Ben-ish, and as convincing and fully submitted to his task as Dano is to his.

For the first time in my moviegoing life I wasn’t bothered by two actors playing the same character — quite a landmark.

And let’s not under-praise Paul Giamatti‘s deliciously evil performance as Landy. This is one of the tastiest bad guys to come along in any film in a long, long time. He’s like cookies and cream with chocolate sprinkles…perfect. I know, I know…Giamatti is always good but this is a wonderfully venal role and he milks it to the max.

Pohlad’s strategy of cutting between the two periods works quite well, and he particularly excels in his recreations of the Pet Sounds and Smile recording sessions as well as the general period flavor and right-on performances from even the lowest-ranked actors. His casting instincts are excellent. The supporting standouts include Elizabeth Banks as Melinda Ledbetter (whose love affair with and support of Wilson beginning in the mid ’80s constitutes the latter half of the film), Jake Abel as the eternal asshole Mike Love and Max Schneider as Wilson collaborator Van Dyke Parks.

Screenwriter Oren Moverman really found the right tone and particularity here, and Pohlad almost amazingly managed to make the film look and sound authentic all the way down the line, and with a fairly low budget.

BBC.com’s Owen Gleiberman wrote that “once in a while you see a biopic that brings off something miraculous, that recreates a famous person’s life with so much care that the immersion we seek is achieved. When you watch Love & Mercy, you feel like you’re right there in the studio with Wilson as he creates Pet Sounds. And it’s a little like sitting next to Beethoven: the film is tender and moving, but also awe-inspiring.”