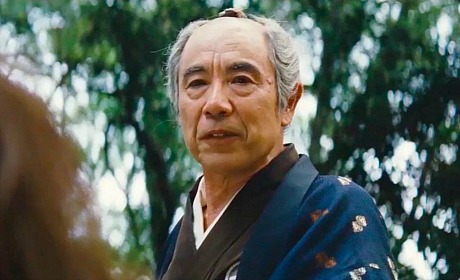 “Most thrillingly, veteran actor-comedian Ogata brings rascally zest to the wizened Inquisitor, treating the invasion of Christianity like an annoyance not unlike the flies he routinely swats at with his fan. When he taunts Rodrigues about his country’s hostility to outsiders by referring to Japan as a ‘swamp,’ it’s with a perverse pride as thick as any of the Christian characters’ exhortations of faith. — Robert Abele, TheWrap.

“Except perhaps in a musical by Gilbert and Sullivan, one would not expect such a character to figure as comic relief, but so it is with the one played here with exquisite high humor by Issey Ogata.

“Inquisitor Inoue exercises the gravest powers, the ability to decide anyone’s life or death, but Ogata, a veteran actor working in Japanese and English, makes him a man keen to enjoy his work, especially when it offers the prospect of a lively debate in which he holds the upper hand. The way this grisly test of Sebastiao’s belief is crossed with the Inquisitor’s blithe humor proves terrifically effective.” — The Hollywood Reporter‘s Todd McCarthy.

But it also allows you to feel what it’s like for a nationalist and a nativist like Inoue to strut his rhetoric like a showhorse and to tell the cultural invaders that their reign is over, that Japan will tend to its own spiritual house, that Catholicism is finished in the land of the rising sun.

Ogata’s money line, said to Garfield: “The price for your glory is their suffering.”

His Wiki bio calls him an actor-comedian. He’s certainly been gracious and eloquent in recent q & a appearances — quite the gray-haired gentleman and charmer.

He graduated from Toyotama High School in Japan, and soon after joined a theatrical company. Then he started garnering roles on Japanese TV. He’s known to native audience for Fuji TV’s Evil Grandmother and NHK’s RinRinto. He’s also starred in a one-man show, “Life Never Stops,” at Shibuya’s GyanGyan theater.

His arthouse film roles include Ota in the Edward Yang‘s Yi Yi, the titular character in Jun Ichikawa’s Tony Takitani and Japanese Emperor Hirohito in Aleksandr Sokurov‘s The Sun.

Ogata was all anyone was talking about after the first big Silence screening in Westwood the weekend before last. And don’t forget that the Los Angeles Film Critics Association almost gave him their Best Supporting Actor award — Ogata was the runner-up behind Moonlight‘s Mahershala Ali.