I don’t own Con Air (why is that?) but I’ve always loved the double-tracking thing it has going on — a blend of ultra-slick action-movie chops along with an attitude of subversive genre parody. I’ve said before that Con Air is primarily a wickedly funny and (at times) almost surreal conceptual comedy, and secondarily an action thriller. Or is it the other way around?

I remember calling it “Hellzapoppin” after I first saw it. A movie that plays the action thriller game — it’s a very handsomely shot and well-edited thing — while mocking and toying with big-budget machismo at every turn. Not in a silly spoof way but using a kind of flip, inside-baseball attitude. As if the people who were paid to put it together — gifted, too-hip-for-the-room writers with jaded nihilist attitudes — felt vaguely befouled for working on a project so caked with cynicism and Hollywood corruption, and decided to inject snide, subversive humor as a form of therapy.
The marvel of Con Air is that the mixture of this attitude with cold action-movie efficiency (this being one of those happy-accident movies that occur every so often) also worked as entertainment because the movie included you in — it made you feel as if you were laughing with it, not at it.
I love John Malkovich’s performance as Cyrus the Virus — every line and body gesture says “this time out I’m a total paycheck whore, but you’ll also notice I’m very good at this sort of dry attitude comedy.” I always chuckle at the buffed-up Nic Cage at his most comically stalwart and sincere. And at John Cusack’s smarty-pants dialogue and his dopey sandal shoes. The body dropping from the sky and landing on the old couple’s car. “Don’t mess with the bunny.” Steve Buscemi defining the word irony. Colm Meaney’s muscle car getting dropped from 2000 feet up. The idiotic Las Vegas plane-crash finale. Ridiculous but all fun, all the time. 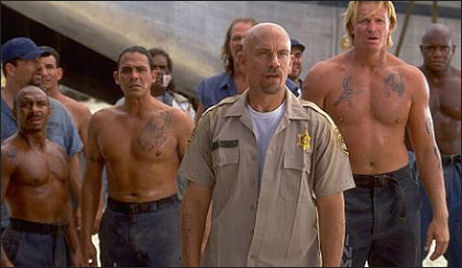 Con Air is a remnant of an era in which Jerry Bruckheimer movies briefly flirted with with this special signature attitude (mocking the big-budget action genre and at the same time kicking ass with it), which partly came from the top-dog writers (Scott Rosenberg was the credited screenwriter but others contributed) he was using back then, partly from Jerry’s own attitude at the time (as he hadn’t yet come into his own and was still working to some extent with the legacy and attitude of late partner Don Simpson ), partly from the Clinton era zeitgeist, partly from the luck of the draw, partly good fortune.
The Jerry Bruckheimer who made this film in ’96-’97 would have howled at the absurdity of making a Lone Ranger movie starring Johnny Depp as Tonto.
l will defend Con Air until the cows come home. It’s expensive guy-movie junk in a sense — one that simultaneously chokes on its own cynicism and yet makes you laugh at the absurdity of making movies of this sort, and yet put together with great care and precision and polish. Bruckheimer used to say I make guy movies but I don’t serve hamburger — I serve first-rate steak. Con Air is like a pricey, perfectly cooked marbled T-bone in a great restaurant in old town Buenos Aires or downtown Chicago or in the east 50s in Manhattan.
I hold Gone in Sixty Seconds and The Rock in the same regard. All three are among my all-time favorite guilty pleasure movies. Those were the days. Jerry doesn’t make ’em like that any more. 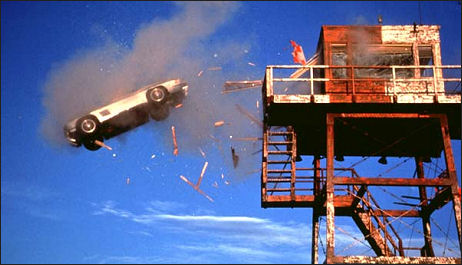