Say what you will about the matter-of-fact unfolding of Oliver Stone‘s W., about the inescapable intrigue coupled with a relatively rote approach, about the mild-mannered, low-style precision that if anything bends over backwards to be fair to our 43rd U.S. President, and about Josh Brolin‘s performance as George W. Bush being dead perfect but — and this, I believe, is a crucial distinction — appropriately hollow. Which means that on some level the performance, like the film itself, leaves you feeling a wee bit flat and wanting more. But wait. 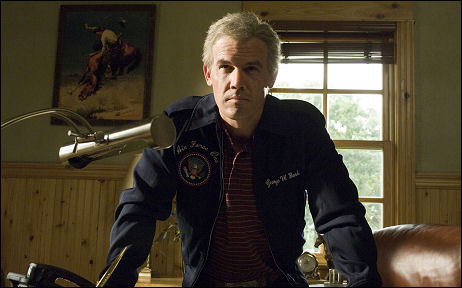 This is part of a deceptive strategy, it turns out. You’re supposed to say “this is great but why isn’t it better?” Because it’s about a fairly shallow man, for one thing, and the facts are the facts. On top of which cagey Oliver is holding his cards to his chest and making you wait for the turnaround of the last ten or twelve minutes, which pays off (or at least paid off for me) in a way that — seriously, no jive — is something close to astonishing.
So bring out all the thoughtful complaints if you want (as Variety‘s Todd McCarthy and the Hollywood Reporter‘s Kirk Honeycutt have done this morning), but you have to give it this one thing, and for me it’s something that, in my eyes at least, makes W. one of the most startling and surprising films of the year.
The damn movie leaves you feeling sorry for this fucker at the finale, and that ain’t hay.
Compassion for a fiendish klutz? For one of the worst guys on the planet right now? For the chief enabler and architect of this country’s massive financial ruin? For the man who tarnished and shamed his country and took it on a moral and ethical downslide that will take years if not decades to turn around, if it’s not too late? Yes.
Which, being a Bush hater second to none, I didn’t think was possible. But that’s what it does, and you have to give Stone credit for an amazing sleight of hand. I came out saying to myself, as Bush himself says to himself at the finale, “What just happened?” By the last shot you are sold because the anger is gone and you’re left with this stunned and oddly tragic figure saying to himself, “This is how my life turned out?” 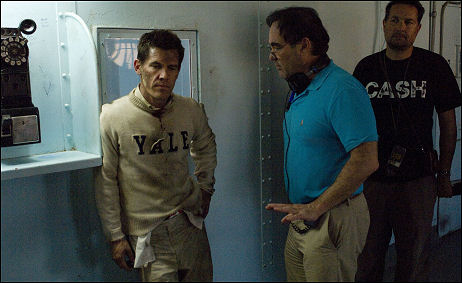 Stanley Weiser‘s screenplay is what it is — a no-frills portrait of a sad, limited and stubborn man who was never able to climb out of what he was given and born into from the moment he took his first breath. How, Weiser must have said to himself at the beginning, do you touch people’s souls with such a character? Richard III, he’s not. But he is George the 2nd, and that’s enough. Because all along it’s been about his relationship to his father, George H.W. Bush. What a mess. What a calamity.
“I’m not sure that we’ll succeed,” Stone recently told a British journalist. “But this movie is not for the 12 per cent who still approve of him – it’s for the other 88 per cent.” (I thought Bush’s approval rating was something like 26 per cent…no?) “On the other hand, I don’t think there’s anything in the movie that the other 88 per cent would have any reason to detest. It is a human portrait of a man, not meant to insult people who believe in what Bush believes in.”
This, Stone told the Brit, is why he made W. – “to understand, to walk in the man’s shoes. ‘It’s my job…if I’m dramatizing his life…to step above my hate,’ he says.'”
This is all I have time to write because I have to see W. again at 9 am and then go to the press junket and talk to Stone, Brolin and Weiser. I’ll write more about it later today and tomorrow.
Added note: W. was shot under the gun, 46 days of principal photography, only 300,000 feet of film exposed (as opposed to the normal million) and only a bit more than two months of post-production. I’m saying this because Stone — you do have to be fair about this — might have had time to burnish and refine and add some English here and there, and W. might have been a bit more than it is right now. I’m not making excuses. I’m just saying that the plain-deal flatness, given the circumstances, was inevitable, and yet, as I’ve said, it serves a purpose in that it reflects the depth of Dubya’s soul. And then along comes the ending and you go, “Oh, I see…now I get it. Wow.”