Variety‘s Todd McCarthy has slammed the Coen brothers‘ “arch and ungainly” Burn After Reading, which opened the Venice Film Festival this evening. (McCarthy saw it in L.A. yesterday.) You have to take reviews of comedies with a grain of salt, so this isn’t necessarily an indication of Big Trouble. Did McCarthy like Intolerable Cruelty? (I loved it.) I remember he didn’t care for the stoner humor in The Big Lebowski at all. I’ve spoken, however, to another critic who saw it and was asking himself as he watched the first two acts, “Why am I not laughing?” 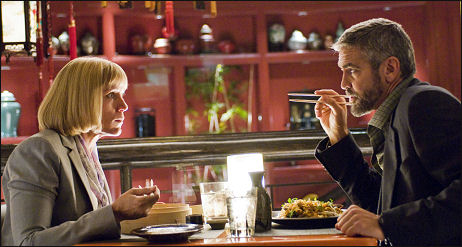 McCarthy is calling it a reversion to “sophomoric snarky mode” — a fallback, he means. “A dark goofball comedy about assorted doofuses in Washington, D.C., only some of whom work for the government, the short, snappy picture” — 95 minutes, all in — “tries to mate sex farce with a satire of a paranoid political thriller, with arch and ungainly results. Major star names might stoke some mild B.O. heat with older upscale viewers upon U.S. release Sept. 12, but no one should expect this reunion of George Clooney and Brad Pitt to remotely resemble an Ocean’s film commercially.
“A seriously talented cast has been asked to act like cartoon characters in this tale of desperation, mutual suspicion and vigorous musical beds, all in the name of laughs that only sporadically ensue. Everything here, from the thesps’ heavy mugging to the uncustomarily overbearing score by Carter Burwell and the artificially augmented vulgarities in the dialogue, has been dialed up to an almost grotesquely exaggerated extent, making for a film that feels misjudged from the opening scene and thereafter only occasionally hits the right note.
“The Coens’ script, which feels immature but was evidently written around the same time as that for No Country or Old Men, is just too fundamentally silly, without the grounding of a serious substructure that would make the sudden turn to violence catch the viewer up short. Nothing about the project’s execution inspires the feeling that this was ever intended as anything more than a lark, which would be fine if it were a good one. As it is, audience teeth-grinding sets in early and never lets up.
“Incidental niceties crop up, to be sure. The Coens’ economy of storytelling is in evidence, as is their unerring visual sense, this time in league with cinematographer Emmanuel Lubezki; a low-angle shot of Harry, knife in hand, lingers especially. The date montages are cute, and the facial reactions of JK Simmons, playing a CIA boss more dedicated to avoiding fuss and bother than to getting to the bottom of things, are once again priceless. But on any more substantive level, Burn After Reading is a flame-out.”