Abortion is a Hollywood no-show

If I were Katherine Heigl and I’d just discovered I’ve been impregnated by a beefy, no-account slacker like Seth Rogen, I would run, not walk, to the nearest recommended abortionist. But of course, as N.Y. Times writer Mireya Navarro points out, this option doesn’t exist in mainstream films like Knocked Up and Waitress. 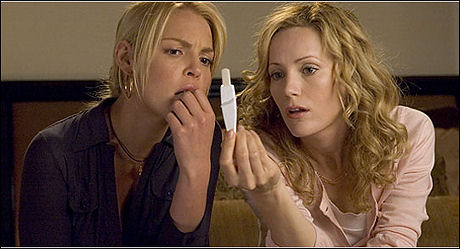 “Though conservatives regularly accuse Hollywood of being overly liberal on social issues, abortion rarely comes up in film,” she writes.
“Real-life women struggling with unwanted pregnancies might consider an abortion, have intense discussions with partners and friends about it and, in most cases, go through with it. But historically and to this day in television and film — historians, writers and those in the movie industry say — a character in such straits usually conveniently miscarries or decides to keep the baby.