The Detroit Flm Critics got it right when they defied conventional wisdom by giving The Fighter‘s Amy Adams their Best Supporting Actress prize, and not her costar Melissa Leo, whom everyone else has cited. I love Leo personally, and if she wins the Oscar, fine. But she’s playing a momma monster who grates a bit with a second viewing, and who turns rancid when you catch The Fighter a third time. 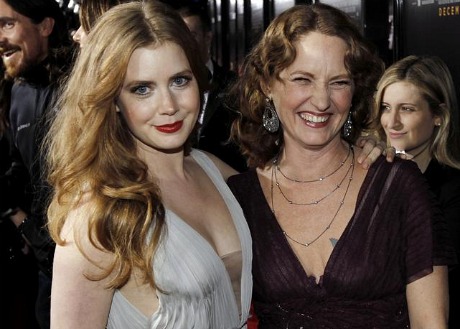 It’s not just the performance that people vote for; it’s also the character. Do you feel this person has been written and portrayed in a filled-out, real-enough way? They may be flawed, perhaps tragically so, but do their actions square with your understanding of what people are like and how the world is? Or do they seem alien and/or repellent? Would you like this person or want them for an acquaintance or friend if you met them in real life? These are questions that people kick around.

Fair warning to spoiler whiners: Leo’s braying, chain-smoking mom looks again and again into the damaged life of her ex-boxer son Dicky’ (Christian Bale), sees him jumping out of the second-floor window of the crack house he lives in, mentally realizes he’s an addict, and yet emotionally pushes it aside, refusing to actively deal with it (by urging rehab, say) and she still favors him over her other non-addicted son, Mickey (Mark Wahlberg). This is how parents are, I know. They have favorites. But still…

Leo sees nothing other than “family, family, family” as the cornerstone of her life and her son’s boxing career, and yet it’s obvious that to her “family, family, family” means “me, me, me” in terms of holding onto power and pushing and coddling Dicky to the point of absurd and ridiculous denial. What is that scene when she’s watching the HBO special and she says to Wahlberg, “Are you watchin’ this?” She didn’t get what was going on with Dicky because she didn’t want to get it, because Dicky had to be the champ and the big brother who ruled the roost…Dicky, Dicky, DIcky. 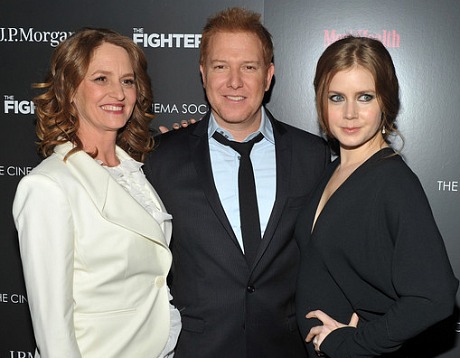 Amy Adams walks into Wahlberg’s life, takes one look around and said, “What the fuck is this? Your career is on the verge of going down the toilet because your older brother is a junkbag and they’re putting you into fights that you shouldn’t be fighting.” This, of course, is what the audience has been thinking almost since the film started. They’re also asking themselves, “What is Melissa Leo’s blockage?” We get it, Amy Adams gets it and Leo refuses to until the HBO show comes on, and even then she favors Dicky. She’s a textbook example of a malevolent mother.

That’s why Adams should win the nomination and the Oscar, I feel, because she’s easily as good as Leo, chops-wise, and just as strong and scrappy as Leo’s character, only you can really identify with and believe in Adams while Leo’s mom is just, like, “forget it.” The more I think about her, the more repellent she seems.