Thanks to reader Tommy Matolla for sending along a photo of the just-departed Peter Boyle as campaign manager Marvin Lucas in Michael Ritchie‘s The Candidate (1972) — my all-time favorite Boyle performance. When I heard of his passing this morning I thought immediately of how superbly on-target he was as the guy who managed, manipulated and mind-fucked Bill McKay (Robert Redford) in his California campaign for the U.S. Senate. 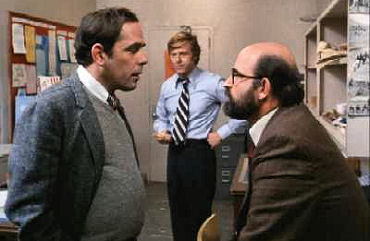 Well-mannered and nicely dressed in a trimmed beard and glasses, Lucas was a sly politico with a cynical heart and a whatever-works attitude, and Boyle’s air of witty refinement surprised a lot of people given his then-current rep as a thuggish meathead type — due, of course, to his breakout performance in John Avildsen‘s Joe (’70), in which he played a hippie-hating blue-collar guy.
And yet Boyle also portrayed Lucas with a subtle (and in my view, quietly hilari- ous) comedic edge. He delivers each line with total sincerity (as far as it goes) but at the same time lets the audience know that Boyle knows that Lucas is a kind of amiable devil — and at the same time just a practical pro with a job to do. It was this performance, I think, that made people realize he was much more than a one-trick blue-collar pony. (Few seemed to understand when it first opened that The Candidate was a very dry comedy — every scene has an oblique comic thrust.)
98% of the public thought of him as the cantankerous Frank Barone in Everybody Loves Raymond, which ran from ’96 to ’05 (while providing Boyle with much financial comfort) but his glory period was from ’70 to ’76: Joe, The Candidate, Steelyard Blues (another hilarious turn), The Friends of Eddie Coyle (as a sinister Boston bartender who handled the hit on Robert Mitchum), Mel Brooks‘ Young Frank- enstein (his legendary performance as a randy, tap-dancing, Wall Street Journal -reading monster with a huge schtufenhaufer) and lastly Martin Scorsese‘s Taxi Driver (in which Boyle played Wizard, the loutish, know-it-all cabbie). 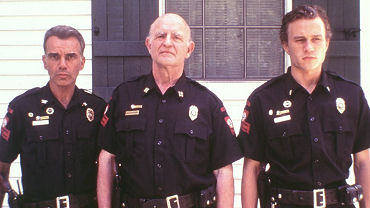 He had a good career after this, but the quality of roles and films for the last 30 years were touch and go. Boyle’s last solid performance in a first-rate feature film was in Marc Forster‘s Monster’s Ball, in which he played Billy Bob Thornton‘s racist father.
In the summer of ’70 or ’71 a guy I used to know ran into Boyle one night at an outdoor bar on the grounds of the Tanglewood Music Festival. After a couple of pleasantries he offered Boyle a freshly-poured brew and said, “Have a Budweiser, king of beers!” — one of the signature lines from Joe. I don’t remember if Boyle accepted it or not, but as he walked off he said to my friend (or so I was told), “Thanks, kid — you’re all right.”