Alfonso Cuaron‘s Children of Men “has not one or two but three of the most spectacular shots ever conceived by a filmmaker,” writes MCN’s Pablo Villaca. “And the best thing is the film is more than technically marvelous; it tells a touching story full of significance. I fell deeply in love with this movie. 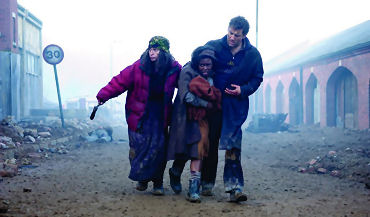 “But it’s also rich enough that it allows its fans to defend it from a more rational, cold and detached point of view as well. And if I’m going to succeed on making a case for why it’s the best film of 2006, that’s how we should proceed.”
Has anyone else besides Pablo Villaca and myself picked Children of Men as their Best Film of the Year? I don’t mind being a party of two — totally cool with that — but I’m curious.
“From a structural standpoint, Children of Men has characteristics of an action movie — a very good one. But what the audience will feel is that they’re watching an essentially dramatic and political narrative, for all the chase is part of very well con- structed plot and always plausible, and it doesn’t merely follows genre formulas.
“Cuaron proves his gifts as a storyteller when he manages to establish the univ- erse in which the story is set even before the title appears on screen. In a gray, chaotic and hostile London, we follow Theo while he barely escapes a terrorist attack — an incident that sets the tone of insecurity and violence that will dominate the whole film.

“Building a convincing portrait of the post-apocalyptic world and its social convul- sion, the film’s production design is phenomenal even in its small details, providing the audience with important information through scenic props such as newspaper clippings, photos and protests written with graffiti on city walls (which is how we’re introduced to the concept of an imminent uprising).
“Finally, the idea of showing Michelangelo’s David (rescued from a destroyed Italy) with a prosthetic leg reveals a curious — but appropriate — sense of humor by the filmmakers.”