In an 8.20 interview with Le Figaro‘s Jean-Paul Chaillet, Sean Penn basically threw up his hands and said “what the eff?” in a comment about The Tree of Life and the creative workings of Terrence Malick. 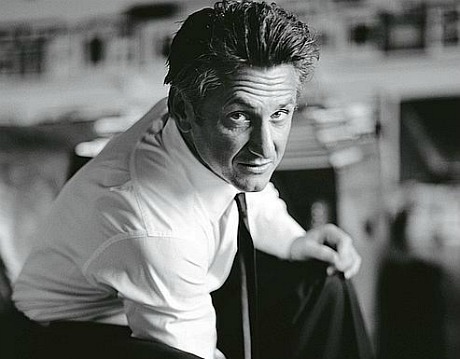 “I didn’t at all find on the screen the emotion of the script, which is the most magnificent one that I’ve ever read,” Penn said. “A clearer and more conventional narrative would have helped the film without, in my opinion, lessening its beauty and its impact. Frankly, I’m still trying to figure out what I’m doing there and what I was supposed to add in that context! What’s more, Terry himself never managed to explain it to me clearly.”

In short, whatever Penn had responded to or become excited about as an actor was “there” in the script, but then Mr. Intuitive Light of God started tossing the lettuce leaves around during filming and definitely in the cutting and hey, that’s the Malick process. “Lean” and “lucid” and “straight-shooting” are never the ultimate result.

I said a vaguely similar thing in a 6.29.11 riff about Malick’s 10.1.96 draft of The Thin Red Line. “It was tight and true and straight to the point, and it had no alligators sinking into swamps or shots of tree branches or pretty leaves or that South Sea native AWOL section or any of that languid and meditative ‘why do we vie with ourselves?’ and ‘why is there such strife in our hearts?’ stuff.

Remember also what I wrote during last May’s Cannes Film Festival, which was that there was once a much-longer cut of The Tree of Life and that Penn’s character had all kinds of dialogue on this version with a character arc and everything.

“I heard from a trusted source yesterday that Penn’s part in The Tree of Life, which is barely there with maybe ten lines of dialogue, if that, was fairly substantial in earlier cuts,” I wrote. “But like Adrien Brody‘s character in The Thin Red Line, it was gradually cut down to nothing. Penn is here but didn’t attend the Tree of Life press conference because…ask him.”

Tree of Life cinematographer Emmanuel Lubezski, remember, told Cahiers du Cinema that Malick was working on a six-hour cut of The Tree of Life.