What…another Dark Knight reviewer doing cartwheels over Heath Ledger‘s Joker? Is this getting tedious or just repetitive? We get it already. Brilliant demonic channeling. The guy’s going to win a posthumous Oscar for Best Supporting Actor. Warner Bros. will almost certainly run a full-on Oscar campaign on his behalf. Now can we talk about something else, please? I feel like I’m getting beaten over the head here. 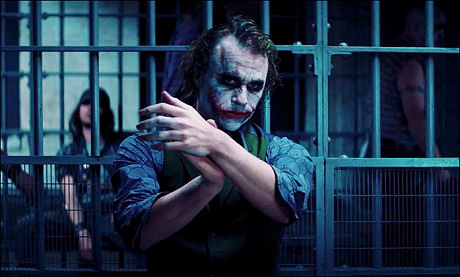 Ledger “presents himself as The Joker in a role that defines a career,” writes Rope of Silicon‘s Brad Brevet. “It is unimaginable it would come to the point that a film based on a comic-book character could actually have such an impact on one person. On a generation. Ledger’s decent into what is, and has become, The Joker makes Jack Nicholson’s interpretation look like nothing more than a simple clown.
“‘Wait’ll they get a load of me,’ Jack said 19 years ago. Wait until you get a load of Heath!
“The Dark Knight presents a character so destructive and without a care for those landing in his path of decimation that you are left to your own devices. Love him. Hate him. Hate to love him or love to hate him, director Christopher Nolan has guided an actor into a dark realm not often realized. The Joker finds his place alongside villains that go by the name of Hannibal, Scarface and John Doe himself. A nameless, unrecognizable entity you won’t be willing to or able to admit is Ledger until the credits roll.”