Just as Carlo had to answer for Santino, the 20th Century Fox honchos who greenlighted The Day The Earth Stood Still have to answer for their judgment. If I was Rupert Murdoch I’d send three goons over to the office of the primary responsible party who said “yes, this is a good idea and ready to roll — it has chops that could really burn down the box-office, and David Scarpia‘s script kicks it,” and I would sever his ass and have him driven off the lot. 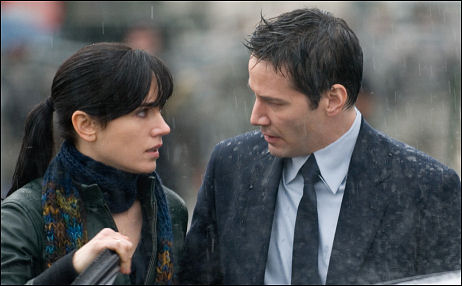 I wouldn’t have Clemenza garrot him from the back seat as he drives away because we live in a liberal-minded society and for the most part believe in cutting people slack — i.e., refrain from having them killed — when they screw up. But what an infuriating, intensely dull, stunningly unimaginative film this is…my God.

A remake of the half-sublime, half-embarassing 1951 Robert Wise original (which I just bought on Blu-ray a week and a half ago), The Day The Earth Stood Still is the total end of director Scott Derrickson as any kind of credible-dependable second-string techno helmer. The man is now instant Jan De Bont.

The plodding tone of TDTESS — the feeling it gives the viewer of being stuck and slowly smothered in slumbering mentalities and high-tech ooze — recalls the hand and mind of Plan Nine From Outer Space director Ed Wood, Jr. And if you ask me anyone who manages to resuscitate even a semblance of the spirit of that Angora-sweater-wearing legend needs to be hunted down with a deer rifle. Or at least howled and pointed at, like the zombies in Phil Kaufman‘s Invasion of the Body Snatchers.

What Derrickson, Scarpia and Co. have done is take Edmund H. North‘s original screenplay (itself based on a short story by Harry Bates), changed the subtext of Klaatu’s “change or else” ultimatum (stop pollution and ruination of the planet rather than halt nuclear-weapon aggression), and thrown in a lot of faux-Spielbergian spooky atmospherics (i.e., having all major events happen at night to allow for the fog-pierced-by-bright-lights effect) in hopes that it will all coagulate into something as strong and purposeful as the ’51 film, only bigger and flashier. 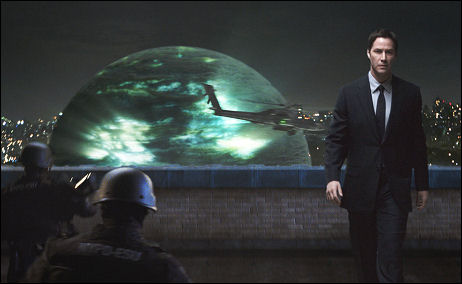 Forget it, fuck it, blow it off and go drown your spirits at the nearest pub/bar/restaurant. One way or another, you need to get this movie out of your head.

The failure of TDTESS has been compressed and condensed into the suffering eyes of Kathy Bates, clearly in hell as she tries to play a steely-blustery Secretary of Defense determined to militarily repel the invasion of planet earth by Klatuu and Gort, who arrive in a massive nonsensical space ship in the form of a Jupiter-like (i.e., gas-enshrouded) sphere. It’s awful, so awful to watch poor Bates says the lines in Scarpia’s script, dying inside a little bit more with each new utterance.

I can’t write about this. I really can’t. All right, I’ll give it another shot because I agree with what the film is saying (i.e., stop with the greenhouse gases or else). But I can feel the acid building in my stomach

Derrickson’s instruction to Keanu Reeves (i.e., Klaatu) to talk like an alien who doesn’t know the terrain of the human heart was grand-slam redundant since Reeves already exudes a slightly not-of-this-world apartness. We don’t care about Klaatu’s personality, or the history of it. All we want him to do is act like Michael Rennie and be a clever smoothie — i.e., blend in and use his intelligence to defeat and outmaneuver the macho-kneejerk militarists. That’s almost exactly the way this movie doesn’t go.

I hated the recurring decision by the micro-biologist hero-mom (Jennifer Connelly ) to constantly lie to her obviously bright and mature young son (Jaden Smith ) whenever anything dark or momentous happens. (Parents who keep the truth from their children are monsters — Taliban-ists at heart.) Of course, I didn’t believe for a second that Connelly was a micro-biologist in the first place. She looks and behaves like an actress trying like hell to play one, and getting no help from anyone out of camera range.

Kill this movie, stop this review, put an end to the pain, I can’t stand it. 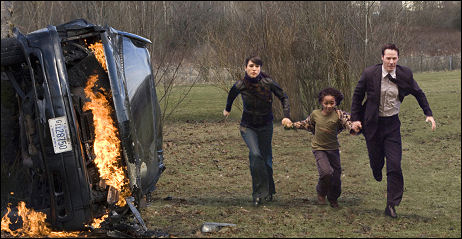