Something snapped into place when I read this 1.3.10 Manohla Dargis piece about movie-watching eternals and technology. I’d just scanned the latest Avatar box-office numbers ($800 million worldwide two days ago, expected to surpass $1 billion in a week or so) and the guesswork had suddenly gone out of the equation — Avatar is the Best Picture front-runner. It opened 15 days ago and this much is certain. 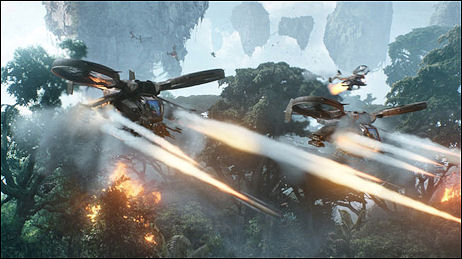 The four main reasons are (a) the lasting emotional wow, (b) the way it seems to have re-energized the moviegoing experience through 3D (which will henceforth be a potent exhibition attraction), (c) the Alexander-ish worldwide box-office domination and (d) the immensely satisfying depiction of the defeat of Bush-Cheney corporate militarism (and the right-wing blogger fury that has resulted).

The backlashers have all been heard and barely made a dent. The only thing that can turn it around is if Academy voters don’t give a shit what people like me are saying and vote for Up In The Air or The Hurt Locker for their own reasons. But even for that to happen Up In The Air has to somehow find fresh wind. The Hurt Locker has continued to find new energy all along, most recently through the year-end critics awards. The case has been more than made.

But — tell me if I’m wrong — there’s a resolve in Dargis’s words and feelings that seems to affirm Avatar‘s inevitability.

“At a movie theater rigged for 3-D projection, I saw Avatar with an audience that watched the screen with the kind of fixed attention that has become rare at the movies. True, everyone was wearing 3-D glasses, which makes it difficult to check your cellphone obsessively, but they also seemed captivated.

“When it was over, people broke into enthusiastic applause and, unusually, many stayed to watch the credits, as if to linger in the movie. Although much has been made of the technologies used in Avatar, its beauty and nominal politics, it is the social experience of the movie — as an event that needs to be enjoyed with other people for maximum impact — which is more interesting. 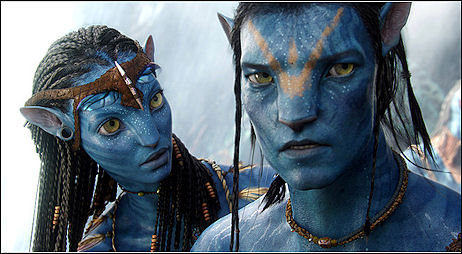 “That’s particularly true after a decade when watching movies became an increasingly solitary affair, something between you and your laptop. Avatar affirms the deep pleasures of the communal, and it does so by exploiting a technology (3-D), which appears to invite you into the movie even as it also forces you to remain attentively in your seat.

“You can get lost in a movie, or so it seems, and melt into its world. But even when seated third row center and occupying two mental spaces, you understand that you and the movie inhabit separate realms. When I watched The Dark Knight in IMAX, I felt that I was at the very edge of the screen. Avatar in 3-D, by contrast, blurs that edge, closing the space between you and the screen even more.

“Like a video game designer, James Cameron seems to want to invite you into the digital world he has created even if, like a film director, he wants to determine your route. Perched between film and digital, Avatar shows us a future in which movies will invite us further into them and perhaps even allow us to choose not just the hero’s journey through the story, but also our own.”